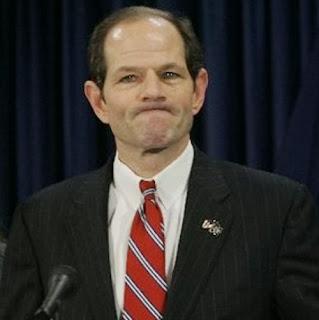 It's pretty well known that when Elliot Spitzer was an ambitious Attorney General in New York, he liked to play rough with the people he was prosecuting, such as Richard Grasso, Chairman of the NYSE and cases involving prostitution:

Big Apple Oriental Tours was a Queens-based travel agency with an angle: it marketed vacations for men to destinations such as Angeles City, Philippines, a jurisdiction in which adult prostitution is nominally illegal but is condoned and regulated by the government because of the money it brings in.
...
In 2003, attorney general Spitzer, with one eye on the feminist vote and the other on the governor’s mansion, commenced a campaign of legal harassment against the tour company, obtaining a civil injunction prohibiting the company from advertising, which effectively put it out of business, according to owner Norman Barabash.

Nice of Spitzer to attempt to enforce law in a foreign country, which appears to have no interest in its enforcement for his own political benefit.

Of course, we know in 2008, as Governor of New York, Spitzer became entangled in his own prostitution scandal when it was revealed he was  engaging the services of high priced "escort service" Emperors Club VIP, and "met" with $1000 a night call girls, in probable violation of the laws against prostitution, as well as anti-money laundering provisions of the Bank Secrecy Act and the Patriot Act.  He was known as "Client 9" to his "service providers", of which his favorite was allegedly Ashley
Dupré, who parleyed the affair into a playboy spread (NSFW). Although he resigned in the face of likely impeachment, he was never charged with a crime.
Now we hear that in addition to liking it rough in the courtroom, Spitzer liked it rough in the boudoir as well:  Call girl: Eliot Spitzer liked to choke me

Eliot Spitzer lusted after violence, a former hooker says in a new tell-all book — revealing in graphic detail how the love gov pinned her to a bed inside a posh, Murray Hill apartment and then gripped her by the neck until she feared for her safety.

The violence was scripted by Spitzer, who wanted his hooker to follow a role-play dialogue in which she would pretend she had just taken a self-defense class.

The kinky politician would then pretend to test her skills by announcing, “Well, then, let’s see if you learned anything,” and attacking her.

“The more struggle there was, the more he was into it,” foxy blond escort Rebecca Woodard recalls of her sadistic tryst with Spitzer, whom she serviced for $1,500 at the behest of notorious hooker booker Kristin Davis.


“When he grabbed my throat, that was too much,” Woodard says in her book, “Call Girl Confidential,” written for Simon & Schuster under the nom-de-plume of Rebecca Kade.

Woodard would go on to work for Hockey Mom Madam Anna Gristina — eventually allowing her phone calls to be recorded to help prosecutors take down Gristina’s far more upscale operation.

“He wasn’t squeezing,” she recalls of the governor’s hands at her neck. “He was pushing down. I was on my back. I don’t know if he was trying to really hurt me, but he was . . .

“It got rough,” she writes. “And then he put his hands around my throat, strangling me.

“He wasn’t pretending to be a rapist. But he was like an attacker. I still had my lingerie on. He was naked. He was aroused,” she writes.

"And then he put his hands around my throat" is a perfect metaphor for the democrats.

Wombat-Socho has the grand Rule 5 post: Rule 5 Sunday: New Year’s Extended Hangover Relief Edition up at the other McCain.