The Twit of the Week

The honor clearly goes to Justine Sacco, the Senior Director of Communications for IAC, who getting ready to depart for South Africa on business, sent out the tweet: 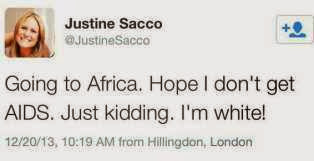 Now, anybody with half a brain recognizes this as an ironic statement meant to convey her acknowledgement of assumed and unjust white superiority.  Even though she only has a few Twitter followers (twits?) it went viral, and with great cries of "racism" etc. etc., and by the time her plane had landed in South Africa, she had been fired.

From McCain:  So, Justine Finally Landed …


...Twelve words, and let’s get her fired from her job for making a bad joke on Twitter, as if getting her fired will purge the world of racism and thereby end AIDS in Africa. The Daily Mail reports.


The PR executive who was summarily dismissed after her racist Tweet sparked a revolt on social media has apologised – as her own father called her a ‘f****** idiot’.
Justine Sacco said that she was ‘ashamed’ over her actions and said she had been ‘cavalier’ in making her tasteless joke about the AIDS crisis in Africa.
But her father, who has not been publicly named, was more forthright and said that what she did was ‘unforgivable’.
He also apparently backed the campaign to name and shame his daughter as, in an ironic twist, it emerged he moved his family from Cape Town to the US in 1994 to escape racism at the end of Apartheid. . . .
Losing her job as a communications director could also mean losing her US work visa -potentially forcing her to leave America.


Well, I’m sure we’re all glad Justine’s father called her a “f**king idiot,” but did you notice something about that article?

The "something" is the fact that the article calls her tweet out and out racism.  It was not.  It was stupid, but it was the opposite of racist, it was kowtowing to racial political correctness, and it failed miserably. It's ironic that most of the support she has garnered has been from conservatives, who understood the intent, and thought the twitter storm was unnecessarily malicious.

But I have to say, after the Uncle Phil Robertson A&E kerfuffle, I have a bit of schadenfreude (it's such a useful word) at the sight of a liberal being roasted in the flames of political correctness.

Now there you go, a show everybody can enjoy.