We enjoyed a quiet Christmas yesterday.  Opening presents under the tree took a few minutes, as we had a couple for each other, and a few more that had come by mail.  We had guests over for Christmas dinner, but being old farts like us, they left early.

Christmas has severely limited the amount of Obamacare Schadenfreude being put out, but a few slipped through the tinsel wall:

Many counties have only pricey plans 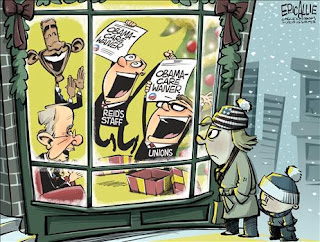 More than half of the counties in 34 states using the federal health insurance exchange lack even a bronze plan that's affordable — by the government's own definition — for 40-year-old couples who make just a little too much for financial assistance, a USA TODAY analysis shows.

Many of these counties are in rural, less populous areas that already had limited choice and pricey plans, but many others are heavily populated, such as Bergen County, N.J., and Philadelphia and Milwaukee counties.

More than a third don't offer an affordable plan in the four tiers of coverage known as bronze, silver, gold or platinum for people buying individual plans who are 50 or older and ineligible for subsidies.

Look at the electoral map.  The Democrat party of today is almost an entirely urban phenomenon.  Obamacare is designed to solve a largely urban problem, for an urban population.  They frankly do not care about the country bumpkins who don't, for the most part vote for them, but do provide the bulk of the food, energy and the materials required for civilization.

And now that the final deadline has passed to sign up for Obamacare to have insurance coverage by the time your last one expired/was cancelled by Obamacare: 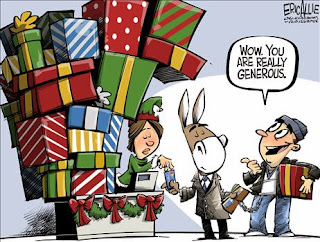 I Tried, and Failed, To Sign Up For Obamacare


I tried to use the Obamacare exchange in my state, I really did. I probably spent about seven hours on the site in four or five sessions over the past few months.

Theoretically, I’m the sort of person who might benefit from the program. I don’t work for a big company that provides health insurance for its employees. We had been getting our family health insurance by paying for a “cobra” policy that extended the benefits my wife had gotten from her former job, but that has an 18-month time limit. So we need new health insurance for our family effective January 1, 2014. (A modest health reform might extend that 18-month time limit to, say, four years, but the drafters of Obamacare were not interested in modest reforms.)

In the past, I had bought health insurance through the Authors Guild. But because Obamacare outlawed individual policies of the sort that had been available through the Guild, that is no longer an option. (A modest health reform might have encouraged the purchasing or provision of health insurance through voluntary professional associations such as the Authors Guild, but the drafters of Obamacare were not interested in modest reforms.)

I live in Massachusetts, a state that had, under Governor Mitt Romney, pioneered the “individual mandate” and “universal coverage” that are at the center of Obamacare. You’d think they’d have a functioning Web site for health insurance. And they did, a year or so ago when I window-shopped for health insurance. Since then, however, to become compliant with Obamacare, the state scrapped the old RomneyCare web site and replaced it with a non-functioning Obamacare site.

Initially, I waited, figuring the site would be fixed by the time I needed to buy insurance. Indeed, there were plenty of signs that the site was being repaired.

“Attention: scheduled maintenance: This site will be unavailable from Wednesday December 11th at 2 p.m. until Thursday December 12th at 5 a.m.,” the home page declared at one point. When I returned another time, there was no time span given, just a sign that said “Maintenance in Progress: Welcome The Massachusetts Health Connector is currently undergoing maintenance. Your health coverage needs are extremely important to us. Please check back soon.”

Obamacare’s defenders like to blame Republican obstructionism for the program’s problems. But Massachusetts has a Democratic governor, Deval Patrick, who is such a pal of the president’s that they regularly have dinner during Obama’s Martha’s Vineyard vacations. Both houses of the state legislature are solidly under Democratic control. One can’t blame the Republicans for this one.

I did call the phone number listed on the site and ask for help at one point. The woman who answered helpfully told me that the language on the site about a December 15 deadline was wrong, and that I actually had until December 23. She also gave me the phone numbers of three insurance companies I could call directly. (A modest health reform might have just planned on consumers purchasing insurance directly from insurance companies rather than on some government-operated web site, but the drafters of Obamacare were not interested in modest reforms.)

The Massachusetts Web site did eventually begin to function well enough for me to compare plans and find one that would work best for me. I stuck it in the shopping cart the way you would with a purchase at L.L. Bean or any other online shopping site.

Instead of a credit-card check-out, though, I found myself in a kind of tax-return hell. The annual pre-April 15 encounter with the IRS is bad enough, but the idea that one should be required to go through the whole thing before buying some health insurance is downright obnoxious. The website wouldn’t accept a hyphenated last name. It had strong opinions about abortion (“How many people are in your family? Include unborn child(ren) if someone is pregnant.”)

Finally, about two-and-a-half hours in, I got an error message that said “a connection to the server has failed. (status=503).” That’s when I gave up on Obamacare and went to the Web site of a health insurance company... 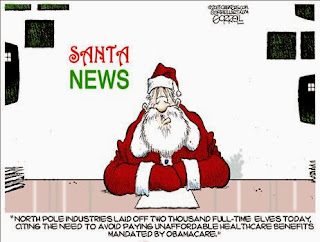 
Merry Christmas, everybody! On the day Obama dispatched some minions to sign him up for the cheapest plan possible, frustrated Californians were left to struggle mightily with a malfunctioning Covered California website.


Covered California has had a surge in the number of people signing up for coverage as the deadline approached. Lee said preliminary data show the number people who had signed up for an individual health insurance policy through California’s state-run exchange had topped 400,000. The previously reported figure was 109,000 by the end of November.

About two-thirds of those who have signed up so far are eligible to receive a federal subsidy that will help lower their monthly premiums, while about one-third make too much money for a subsidy, Lee said.

The need for Covered California to provide consumers some wiggle room became evident as Monday wore on, with complaints surfacing from people who were attempting to sign up for an insurance plan but were unable to do so.

Gene Nelson, an adjunct professor in the biomedical engineering department at Cal Poly San Luis Obispo, had been frustrated in his attempts to apply through the website and through Covered California’s call centers.

He faced a variety of challenges on the website, including stalls, time-outs and messages warning of invalid user names and passwords that left him unable to even create an account.

When he contacted the call center for help, a recorded message told him to sign up through the website instead and then bounced him off the telephone call with a series of busy-signal beeps. He said he was not given the option to hold on the line for an available operator.

Customer service, government style. But when it gets down to it, they don't really care because it's not optional.  No matter how awful the system they create is, you have to navigate it because it's mandatory.  And the results are predictable: 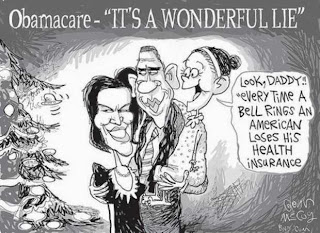 
Support for the Affordable Care Act has dropped five percentage points in a month to a record low, according to a CNN/ORC poll released Monday.

The poll finds that just 35 percent of the public supports the law, compared to 40 percent in late November.
The drop in support indicated in the poll could be particularly troubling to the Obama administration because almost all of it came from women, whose opposition rose from 54 percent to 60 percent in a month. The administration has tried to highlight advantages for women, such as free preventative care that covers mammograms.

Proving that about half the people are morons.  That feels about right. 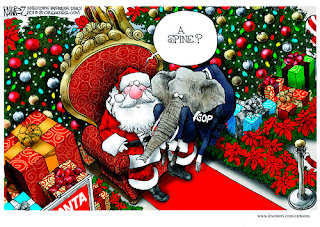 
. . . There has been some discussion among Republicans about tying an individual mandate delay to a proposal to raise the nation's debt limit. That would be a perfect way to distract attention away from the mandate and to Republicans themselves. Democrats would angrily vow that they would not stand for bringing the nation to the edge of default. The mandate issue would get lost in the fighting.

A clean vote on the individual mandate would be infinitely more effective for Republicans. That's not to say it would succeed. Of course, many House Democrats will still vote against delay, and Senate Democrats will kill it.

But Republicans held dozens and dozens of votes on Obamacare in years past when the public had little idea what was at stake. Republicans warned that Obamacare would be a disaster, but voters didn't know what was coming. Now, they do. Maybe it's time for the House to start voting again. 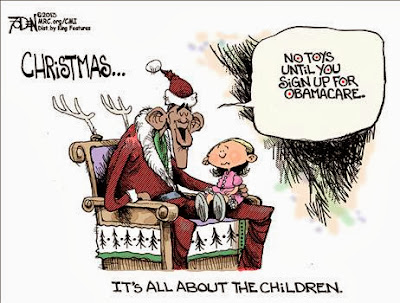 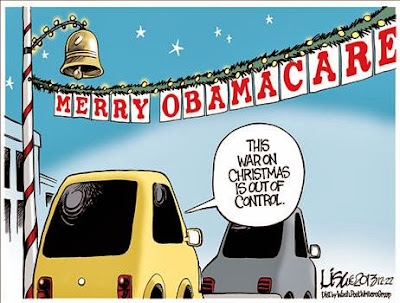 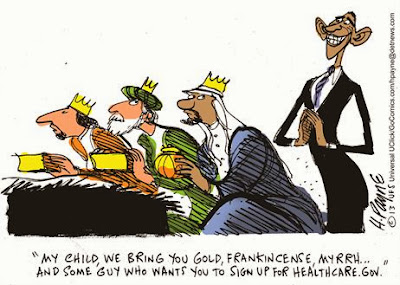 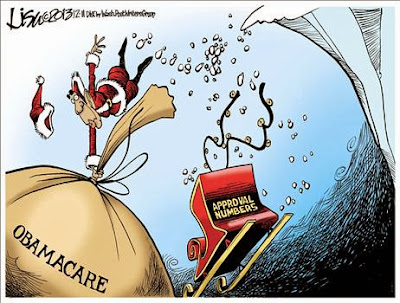