A photoessay by  Lenny Bernstein and Darryl Fears emphasizing climate and weather extremes:
News that shaped the planet in 2013

Another year of extreme weather brought the Philippines a super typhoon and the United States the widest tornado ever observed, deadly wildfires, severe drought and killer floods. President Obama released his plan to battle climate change and its impact on people and wildlife, but the warming planet passed another troubling milestone as heat-trapping greenhouse gases continued to accumulate. Here is a look back at some of the most significant events to affect the environment in 2013.

1. Recorded carbon dioxide levels in the atmosphere reached the unsettling milestone of 400 parts per million on May 10, a level of the heat-trapping gas unseen for 3 million to 5 million years...

Having two zeros makes a number more ominous, because we have five fingers on each hand?  If we thought in binary, would we need to wait until 512 ppm to be unsettled?

Rare, but hardly unheard of. EF-5 exists because tornadoes do occasionally reach that strength.  The fact that the scale only goes to 5 suggests that they are rare.  More rare is when an EF-5 tracks through a heavily populated area, at which point it becomes a tragedy.

Unmentioned is the fact that overall tornado activity activity in the United States is near a record low.


3. A U.S. Fish and Wildlife Service proposal in June to protect both captive and wild chimpanzees under the Endangered Species Act threatened to end their online trade and use as medical lab specimens.

That's good. But I do worry that without a reason to keep chimps  alive, their number will dwindle significantly.


4. President Obama unveiled his long-awaited climate action plan on June 25, ordering the Environmental Protection Agency to propose limits on carbon dioxide emissions from existing coal- and gas-fired power plants. He also said he would approve the Keystone XL pipeline, which would carry crude from Canadian oil sands fields to refineries in the Gulf of Mexico, only if it did not “significantly exacerbate” climate change.

And electricity prices have started to rise in response to the lack of supply as utilities have begun to close coal fired plants before the end of their useful life.  The supply will, ultimately be made up with natural gas, but in the meantime, the market disruptions cause prices to rise.  And the Preznit is playing politics with the Keystone Pipeline, pure and simple.

6. It’s “extremely likely” that humans are the main cause of global warming, the Intergovernmental Panel on Climate Change said on Sept. 27.

Unfortunately for their story, the world hasn't actually gotten any warmer in the last 17 years or so (depending on which temperature  data set you use), so does that mean that humans are the main cause of climate stagnation?


7. The Yosemite Rim Fire was scary not only because it burned for two months ending Oct. 25 and ranked as the third-largest wildfire in the history of California, a state that has seen its share of monster burns. It followed a giant Arizona wildfire that killed 19 elite firefighters, the Granite Mountain Hotshots, in June. On top of that, it followed what meteorologists say was the driest year ever in California, where Death Valley tied the record for the highest temperature ever in June, 129 degrees. Los Angeles and San Francisco posted their driest year on record...

I lived in California long enough (23 years) to watch the wildfires denude the Santa Monica Mountains more than once (literally, the window in our front room overlooked them).  Drought and wildfires are a way of life out west.  And no mention of 10,000 record cold weather records set in winter of 2013.

8. Haiyan, dubbed a “super” typhoon, struck the Philippines on Nov. 7 with sustained maximum winds of 195 mph and gusts of 235 mph, one of the most intense storms in modern times.

And still it was one of the least active years for Atlantic hurricane activity on record.


9. Moose were eaten alive by ticks, two subspecies of butterflies in Florida disappeared, frog and amphibian populations plummeted, and a new study showed that crabs will super-size in the coming years by ingesting increased carbon in oceans. 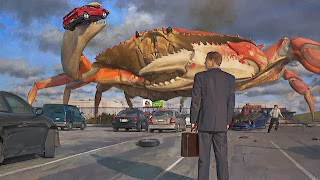 Oh, my god, moose have ticks, scientists lost track of two subspecies of butterfly (not full species, mind you, and "extinct" species are routinely refound"), and crabs may (emphasis on may) respond to increased CO2 in the water by making larger shells!  It's entirely another question if CO2 in the oceans will rise to that point.  If these guys knew any more, they'd be really dangerous.


10. Wildlife poachers kill millions of animals each year, but this year was especially deadly for African elephants and rhinoceroses, whose tusks and horns are valued for carvings and traditional medicine.

That sucks, but I'm shocked that they didn't find a way to make that happen due to global warming.  It's certainly less reach than the "giant crabs" story. Here's a hint.  Civilized people in wealthy countries with a good energy supply rarely resort to killing elephants and rhinos for their tusks and horns.
Posted by Fritz at 1:54 PM