Another weird weather day here.  64 F and rising, and rainy.  The radar suggests it's going to rain all day.

There's a big story about the CGI, the contractor who produced the Obamacare website in the Washington Post this morning.  It will make you worry about all Federal contracting (as well you should):

HealthCare.gov contract: Politics not a factor, but neither were firm’s ties to failed projects


CGI Federal, the company responsible for building the problem-plagued Web site for the Affordable Care Act, won the job because of what federal officials deemed a “technically superior” proposal, according to government documents and people familiar with the decision.

Not considered in the 2011 selection process was the history of numerous executives at CGI Federal, who had come from another company that had mishandled at least 20 other government ­information technology projects more than a decade ago. But federal officials were not required to examine that long-term track record, which included a highly publicized failure to automate retirement benefits for millions of federal workers.
...
In hindsight, one former CMS official said, the AMS record “could well have knocked [CGI Federal] out of the competition, and probably should have.”
...
“Should CMS have recognized that ‘Okay, here’s CGI Federal. It’s a new company, but, oh, my God, it looks a lot like the AMS from yesterday’?” asked one former CMS official familiar with the contracting process who like others interviewed for this article spoke on the condition of anonymity to discuss internal procedures. “Yes. I would consider that dropping the ball.’’

Because we are fooled ruled by the best and brightest.

Obamacare named the biggest story of 2013


NEW YORK (AP) -- The glitch-plagued rollout of President Barack Obama's health care overhaul was the top news story of 2013, followed by the Boston Marathon bombing and the dramatic papal changeover at the Vatican, according to The Associated Press' annual poll of U.S. editors and news directors.

The saga of "Obamacare" - as the Affordable Care Act is widely known - received 45 first-place votes out of the 144 ballots cast for the top 10 stories. The marathon bombing received 29 first-place votes and the papal transition 21.

Other strong contenders were the bitter partisan conflict in Congress and the leaks about National Security Agency surveillance by former NSA analyst Edward Snowden.

Selling Obamacare in a Gay Nightclub in DC; not as popular as condoms.


Washington’s new health insurance exchange dispatched a sign-up envoy to one of the city’s gay clubs one recent night to get out the word about Obamacare. It envisioned men mingling on the dance floor, a cocktail in one hand and enrollment information in the other.

But the brochures about DC Health Link, as the exchange is called, weren’t snapped up as quickly as the free condoms provided by a local clinic.
...
Add an appearance by Santa wearing a “Naughty” hat as he posed for pictures on stage, and DC Health Link assister John Esposito had a near-impossible task that night. Positioned behind the stage and bar area, he stood by a small table offering not just information about insurance enrollment but packages of condoms and tubes of lubricant. The latter items were courtesy of the Whitman-Walker Clinic, which also had its HIV testing van parked outside.

“It’s not about drawing a huge drove of people to the system,” explained an upbeat Esposito, who by day is stationed at Whitman-Walker as part of the DC exchange’s ongoing work with the lesbian, gay, bisexual and transgender community.

We touched on the comparison of the hacking of the Target stores system for credit cards and the vulnerability of Obamacare to similar hacking; however, at the time, I didn't know that unlike the private concerns, the government is not obliged to tell you when they leak your shit credit card #...

Hiding the Hacking at HealthCare.gov


Christmas shoppers were stunned to learn last Thursday that computer hackers had made off with the names and other personal info of some 40 million Target customers. Some of the pilfered information is reportedly being sold on the black market, prompting JP Morgan Chase to limit purchases and cash withdrawals on debit cards owned by recent Target shoppers.

But at least Target informed its customers of the security breach, as it is required by federal law to do. HealthCare.gov faces no such requirement; it need never notify customers that their personal information has been hacked or possibly compromised. The Department of Health and Human Services was specifically asked to include a notification requirement in the rules it designed for the health-care exchanges, but HHS declined.

What you don't know won't hurt your, right? 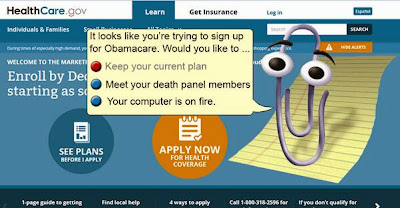 
President Barack Obama's healthcare law could have a "meltdown" and make it difficult for his Democratic Party to keep control of the U.S. Senate next year if ongoing problems with the program are not resolved, a Democratic senator said on Sunday.

Senator Joe Manchin of West Virginia, who has urged delaying a penalty for people who do not enroll for health insurance in 2014 under the law, told CNN that a transitional year was needed for the complex healthcare program, commonly known as Obamacare, to work.

"If it's so much more expensive than what we anticipated and if the coverage is not as good as what we had, you've got a complete meltdown at that time," Manchin told CNN's "State of the Union" program.

"It falls of its own weight, if basically the cost becomes more than we can absorb, absolutely."

Manchin has already called for a government shutdown delay of the individual mandate for 1 year.  I see a potential party shift in his future, as West Virginia becomes redder and redder.


In a CMS notice released around 9 p.m. without fanfare (not the way an organized government announces important policy changes if it wants them to be noticed) the administration said it would allow people whose 2013 insurance plans had been canceled to be exempted from the individual mandate penalty in 2014 . . .

This comes on the heels of evidence that “pajama boy” hasn’t been able to rope many friends into signing up for Obamacare. (“A muted turnout over the coming weekend would be bad news for health insurers, already grappling with low enrollments in the first months of the balky roll-out. Health insurers could post significant losses for individual plans sold on the exchanges in the first quarter of next year if the initial batch of enrollees lacks enough healthy people to offset the costs of covering sicker and older members.”)

President Obama did nothing at the end-of-year news conference to dispel the impression of chaos:


Well, there’s no doubt that — that when it — when it came to the health care rollout, even though I was meeting every other week or every three weeks with folks and emphasizing how important it was that consumers had a good experience, an easy experience in getting the information they need and knowing what the choices and options were for them to be able to get high-quality, affordable health care, the fact is it didn’t happen in the first month, the first six weeks, in a way that was at all acceptable. And since I’m in charge, obviously, we screwed it up. . . .


Perhaps less self-reflection and more constant and intense management of his signature legislation would help. Not convinced all will be running smoothly in 2014? You are in good company. The president continues to hit new lows in multiple polls, as does support for Obamacare. . .

And Ann Althouse, always interested in how women think, posts this bit


"Opposition to Obamacare rose six points among women, from 54% in November to 60% now..."


"... while opinion of the new law remained virtually unchanged among men.... That's bad news for an administration that is reaching out to moms across the country in an effort to make Obamacare a success."


Sixty-three percent say they believe the new law will increase the amount of money they personally pay for medical care, which may not be a good sign for a law known as the "Affordable Care Act."

So men recognized it wasn't going to work before women.  I think that has do with the fact that men are interested in the details of how things work, while women, who are generally more closely involved with the actual nurturing aspects of health care had hopes for something better, but little less interest in the financial details of how it was going to actually work.

But good news!  The Administration has no Plan B, so we're stuck with it!


Last Wednesday Jason Furman, chairman of the Council of Economic Advisers, joined the Washington think tank Third Way for a wide-ranging discussion. Near the end of the session, Third Way scholar Bill Schneider brought up Obamacare. "Does the administration have any kind of backup plan — if not enough young healthy people sign up for the Affordable Care Act, what's going to happen?" Schneider asked. Noting that he teaches college classes, and his students don't seem particularly well-informed about Obamacare, Schneider continued, "What are you going to do if they don't sign up in large numbers? The numbers don't look that good for young healthy people."

Furman's response was not particularly encouraging for the administration. "We actually don't have a great demographic breakdown," he said, "but what we do know is that there was a big increase in enrollment in November relative to October, and we've seen increasing demand in December, although we don't have the final numbers and we don't have the demographic breakdown."
..
Schneider was still curious. "But you have no particular backup plan?"

"There's a Plan A," Furman answered. "Which is to enroll as many young healthy people as you possibly can."

Well, at least one younger smoker is going to join the risk pool:

If you believe this I’ve got some nice Nebraska oceanfront property for you to look at. Hopefully when he enters that mystery Social Security number he doesn’t have any problems.