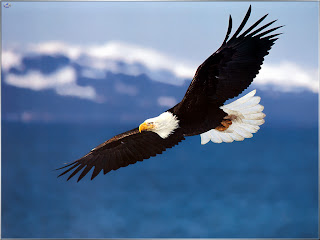 Bald eagles are dying in Utah — 20 in the last few weeks alone — and nobody can figure out why. Hundreds of the majestic birds — many with wing spans of 7 feet or more — migrate here each winter, gathering along the Great Salt Lake and feasting on carp and other fish that swim in the nearby freshwater bays.

Earlier this month, however, hunters and farmers across five counties in northern and central Utah began finding the normally skittish raptors lying, listless, on the ground. Many suffered from seizures, head tremors and paralysis in the legs, feet and wings. Several of the ailing birds were taken to the mammoth Wildlife Rehabilitation Center of Northern Utah, where Marthaler and other handlers tried to save them. Within 48 hours most were dead.


At first, the agency's disease scientists guessed that the illness could be encephalitis, which is caused by the West Nile virus, but later ruled out that possibility. And although many sick eagles tested positive for lead, researchers did not think that it was killing the birds.

Officials suggest the eagle die-off is possibly connected to the deaths of thousands of eared grebes that began in Utah in November. Eagles are known to prey on the small shore birds. Because the grebes are thought to have died from avian cholera, many scientists theorize that the eagles became sick from eating infected grebes. Officials still don't know why the shorebirds became sick.

Reading up on avian cholera, it seems like an entirely logical possibility. I hope it doesn't spread out here; our winter duck population seems low this year, and our eagles have been doing well enough that I worry whether there's enough ducks to get them through the winter.
Posted by Fritz at 6:58 PM