It looks as if Washington 'Coons Redskins coach Mike Shanahan will be was fired today after a 4 year losing record... That sort of makes you think, doesn't it.

Massachusetts, the model for Obamacare, has highest health costs in the United States

On Oct. 30, as President Obama was under fire for the botched rollout of his signature health care law, he visited Boston's Faneuil Hall. It was in that hall in 2006 that then-Massachusetts Gov. Mitt Romney, with a smiling Ted Kennedy by his side, signed a sweeping health care overhaul into law that would eventually become the model for Obamacare.

In his October remarks, Obama used the Massachusetts experience to argue that Obamacare could work, despite what the naysayers claimed...

Yet a new report from the Massachusetts Health Policy Commission reached a different conclusion.


Massachusetts, whose health care reform program was used as a template for the Patient Protection and Affordable Care Act, had the highest per capita health spending in the U.S. in 2009. According to the commission's report, the state spent $9,278 per person on health care in 2009, which was 36 percent higher than the national average of $6,815, and 11.2 percent more than the next-highest state, New York, which spent $8,341.

What a great model!

Stacy McCain notes, as did I a couple of days ago, that the net effect of the Obamacare "reforms" is to help push to costs onto the rural, more Republican leaning states, and is part of the culture war of the cities against their rural suppliers of food, materials and energy.


Was the relatively high cost of health care in Massachusetts a cause or an effect of the push for socialized medicine? The political impetus for ObamaCare came from highly urbanized, Democrat-dominated states where the cost of health care was already high.

If the result of this national policy is to spread the misery (i.e., causing a rise in health-care costs in more rural Republican-dominated states) why should liberals care? This simply deprives the GOP states of an economic advantage they previously enjoyed.


Avik Roy writes on how Politifact’s assessment of the “if you like your plan, you can keep it” promise went from 100% true to half-true to a “pants on fire” lie to the “lie of the year.” The column is fairly devastating by itself, but then Politifact’s Angie Holan, who authored some of the relevant evaluations, tried to defend Politifact with a tweet:

The mind reels. Then-Senator Obama’s 2008 health care plan had numerous elements that were sure to disrupt health insurance markets, as Roy noted in the column. (If, on the other hand, Politifact wants to argue that the initial promise was “true” because it represented then-candidate Obama’s honest intent in 2008, then there was no point in fact-checking it at all.) More importantly, insofar as one wants to argue that the 2008 plan and the PPACA are sufficiently different to justify different assessments of the claim, the individual mandate is largely irrelevant — and this is the first time someone from Politifact has tried to suggest otherwise. (For instance, there’s no mention of the mandate in Ms. Holan’s “Lie of the Year” post.) The individual mandate is not what is causing individuals to lose their health insurance. If anything, it has the opposite effect by reducing the effect of other PPACA requirements. It’s as if Politifact “fact-checkers” don’t know very much about the subjects of their “fact checks.”

I wouldn't say that at all.  All the political fact checkers that I've seen have a clear agenda, and the facts are the warp around which they weave the weft of highly colored spun opinion to create the tapestry that tells their foreordained story.

and finds it worthy of only two "Pinocchios" out of a possible four.


Schumer’s comment was carefully worded to suggest that Democrats are working hard to improve the law while being open to Republican ideas. But his remarks leave out a significant part of the story. Senate Democrats generally have not offered legislative fixes — and the leadership often has blocked legislation backed by Republicans and even some Democrats from coming to the floor for a vote. Administrative fixes engineered by the White House can only go so far in addressing some of the problems that have emerged from the drafting of the original law...This comment is on the tipping point of between One and Two Pinocchios, but we don’t have 1/2 Pinocchios. Given the gap between Schumer’s rhetoric and the reality, we lean toward Two Pinocchios

Is there any doubt that had a Republican Senator uttered equally oleaginous words that Kessler would have tortured the fact more closely to find them worth three or four Pinocchios?

Good news!  The Feds are finally going to find a way to blame the health care roll out failure on Capitalism: U.S. government urged to name CEO to run Obamacare market


The White House is coming under pressure from some of its closest allies on healthcare reform to name a chief executive to run its federal health insurance marketplace and allay the concerns of insurers after the rocky rollout of Obamacare.

Advocates have been quietly pushing the idea of a CEO who would set marketplace rules, coordinate with insurers and state regulators on the health plans offered for sale, supervise enrollment campaigns and oversee technology, according to several sources familiar with discussions between advocates and the Obama administration.

Supporters of the idea say it could help regain the trust of insurers and others whose confidence in the healthcare overhaul has been shaken by the technological woes that crippled the federal HealthCare.gov insurance shopping website and the flurry of sometimes-confusing administration rule changes that followed.

I can't imagine the government could possibly offer enough incentive (legally) for a highly paid, successful CEO to take over such a nightmare, with such a low probability of success. However, I imagine they could find some CEO whose businesses have long been propped up by the feds with the appearance of success that they could use as scapegoats. 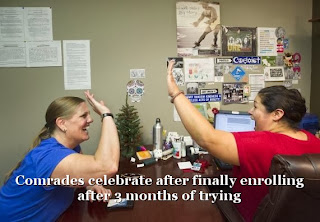 The rollout continues to lag expectations, and the liberal media have continued to move the goal posts in an effort to make the thing look less hideous:


And by Obamacare supporters, I mean the Major Media, who are thrilled with an Associated Press report

Of the more than 1.1 million people now enrolled, nearly 1 millio
n signed up in December, with the majority coming in the week before a pre-Christmas deadline for coverage to start in January. Compare that to a paltry 27,000 in October —the website’s first, error-prone month — or 137,000 in November.

Of course, the original signup expectations were about 7 million, out of some 30 million uninsured, and this doesn't account for the fact that many of these signups were people evicted from the plans that they had personally selected, and fit their needs, and many more are signed up for the welfare program Medicaid.  And we still don't know how many of these plans have been paid for, or will ever be paid for.


The 41 employees of Extreme Dodge in Jackson, Mich., are very familiar with trade-ins, but this year they’re learning about trade-offs as they come face to face with the new realities of health care. A few workers say they’re getting a great deal, but most have a severe case of sticker shock. “I feel like I’ve been taken to the cleaners,” said Neal Campbell, a salesman.

The news was presented at the company’s annual benefits meeting earlier this month, when employees were told that the health insurance plan that the auto dealership had provided its workers was canceled because it doesn’t comply with the Affordable Care Act, better known as Obamacare.

Rather than officially sponsor a new policy, the company -- voted one of the 100 best car dealerships to work for in the country last year -- will instead provide its employees with $2,400 apiece to buy their own insurance, or to pocket and pay the new federal penalty if they elect to go without it.
. . .
Twenty-six of the dealership's workers had been covered this year under the old company plan. Twenty-one have now decided to go with the new group plan recommended by the company for next year, though they realize that they face sharply higher out-of-pocket costs next year.

However, the MSM is starting a campaign to sell "happy" Obamacare stories:


"The White House, Democratic lawmakers and advocacy organizations will launch a campaign this week to highlight real-life experiences under the Affordable Care Act..." "... tales so compelling that they help drive up enrollment, marginalize Republican repeal efforts and erase memories of this fall’s HealthCare.gov debacle."

Shouldn't that just be the internal memo about the campaign? Saying that's what you're about to do is practically the opposite of doing it. And I think the story only came out in that form — over at Politico — because actually doing it is not possible, not with the raw material they have. Perhaps they expected the media to do it for them, in which case the question is, why isn't the media doing their work for them, as usual? And I'm guessing the media can't do it either, because even if you are inclined to sift through the raw material and find the good things, you can only cherry-pick where there are some cherries. Politico needs to write about something, and this was all they had, the desperate fantasy of launching a campaign that can't possibly happen.

And the Washington Post (to mention one) is falling in line like the good soldier propagandist it is:

Health-insurance sign-ups on U.S. exchange top 1.1 million in initial enrollment period
Posted by Fritz at 10:52 AM