Virginia Celebrates the Return of the Big Rock...

Return of rockfish is long-awaited news for anglers


They arrive around Christmas, pushed to our shores by winter's closing fist, slipping south like a river of mercury.

For landlubbers, the return of the stripers beneath the dark, cold waves goes unnoticed. But for fishermen, marinas, tackle shops and the like, few things stir the blood like the annual cry of "They're here!"

The fall run of the Atlantic striped bass - or rockfish, as they're known in these parts - is a leg in one of the planet's great migrations.

It's also one of conservation's success stories and - by pure chance of geography - a gift from nature to us.

"Striper fever" follows the fall migration, a journey that can stretch some 800 miles, from the waters off Maine to the Outer Banks. Seaboard towns ignite as the schools pass, with an estimated 3 million anglers forsaking warm beds in search of a prize. The trophies - females called "cows" - bring up the rear of the exodus, some big enough to tilt the scale toward 100 pounds. 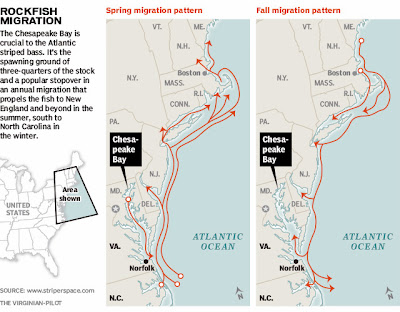 And they're headed here, to winter off our comparatively warm coast, close enough to be hooked from pier, beach, boat, kayak or even Jet Ski.

Three-quarters of the migratory stock pass through the concrete pilings of the Chesapeake Bay Bridge-Tunnel at least once during their life cycle. A 74-pounder caught off Cape Henry in January holds the Virginia state record.

John Crowling, general manager of the Virginia Beach Fishing Center, a marina in Rudee Inlet, calls rockfish "a bonanza" that fills hotel rooms and restaurant tables in the midst of the cold-weather tourist slump.

My fish guide friend and neighbor Walleye Pete has been fishing off the Bay Bridge Tunnel for several weeks now, and reporting good catches of decent sized Striped Bass, as well as Redfish (aka Red Drum): 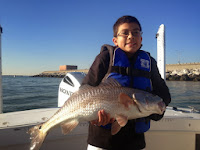 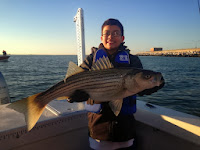 However, anglers are cautioned not to cross the 3 mile line out into the ocean, where Striped Bass are protected:


Virginia anglers love their rockfish. So much so that massive overfishing here and along the East Coast in the '70s and '80s brought the population to the brink of collapse and forced fishing bans in state and federal waters.

Soon the stock began to recover, and Virginia lifted its ban after a few years. But the U.S. Coast Guard is reminding the public it's still illegal to catch or even possess rockfish in federal waters that begin three nautical miles off the coast and stretch out to 200 miles, an area called the Exclusive Economic Zone.

"They're federally protected," explained Lt. Scott Williams, spokesman for U.S. Coast Guard Sector Hampton Roads. "Boaters, whether they're commercial fishermen or recreational fishermen, could be subject to fines if they were to catch Atlantic striped bass in that Exclusive Economic Zone."

The Coast Guard says it's stepping up enforcement efforts, and established a hotline at 757-398-6399 for the public to anonymously report suspected striped bass poachers.

With modern GPS systems there's no excuse for not knowing where they are within a few feet.