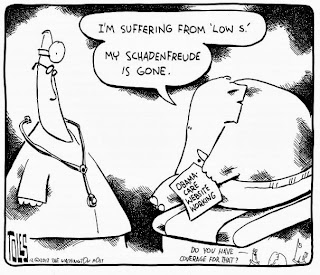 Tom Toles, one of the worst cartoonists ever, had it exactly wrong today, like he does much of the time:


People have been poring over the recent poll numbers, and the results have not been good for democrats and support of Preznit Obama in the upcoming months:


Polling provided to National Journal by the Kaiser Family Foundation shows that white women have soured considerably on the law, especially in the month since its botched rollout. The skepticism runs especially deep among blue-collar women, sometimes known as “waitress moms,” whose deeply pessimistic attitudes toward the Affordable Care Act should riddle Democratic candidates with anxiety.
...
The Kaiser poll, which has been conducted monthly since Obamacare’s inception, shows the law has never been a big hit with white women. But this group’s opinions took a sharply negative turn in the November results. According to Kaiser, 40 percent of college-educated white women hold a “very unfavorable” view of the law—10 points higher than a month ago. An additional 10 percent view the law “somewhat unfavorably.” A month ago, those two groups together totaled just 42 percent.

Another key group that is losing faith is the so called "millennials."  Millennials Jump Ship over Obamacare Bait and Switch


A new poll from Harvard University suggests those days are over – and not just for Obama. As National Journal’s Ron Fournier reports from the survey’s findings a majority of those 25 and under in this survey of more than 2,000 would vote Obama out of office if they had the chance for a do-over. Among the entire group, the President’s overall job approval sinks to 41/54, just about the overall national average.
. . .
Prior to the passage of Obamacare – enthusiastically supported by this demographic while Obama continually promised it would lower premiums and not force people out of existing plans – younger adults could choose insurance that fit their healthier profiles.

Vote in hope, repent in sorrow.  Finally, the Obama and the democrats have lost significant ground with another key demographic.  According to recent Gallup polling, the preszit's approval dropped among Hispanics from 75% to 52%.  Not yet underwater, but barely treading and getting weaker.  Expect a big push on "immigration reform" shortly, but if it continues to decline at the point, I would expect them to jump on the anti-immigration bandwagon.  Actually, this article presents a breakdown of the recent results by a number of demographic factors, and the results should have the democrats scrambling off the ship: 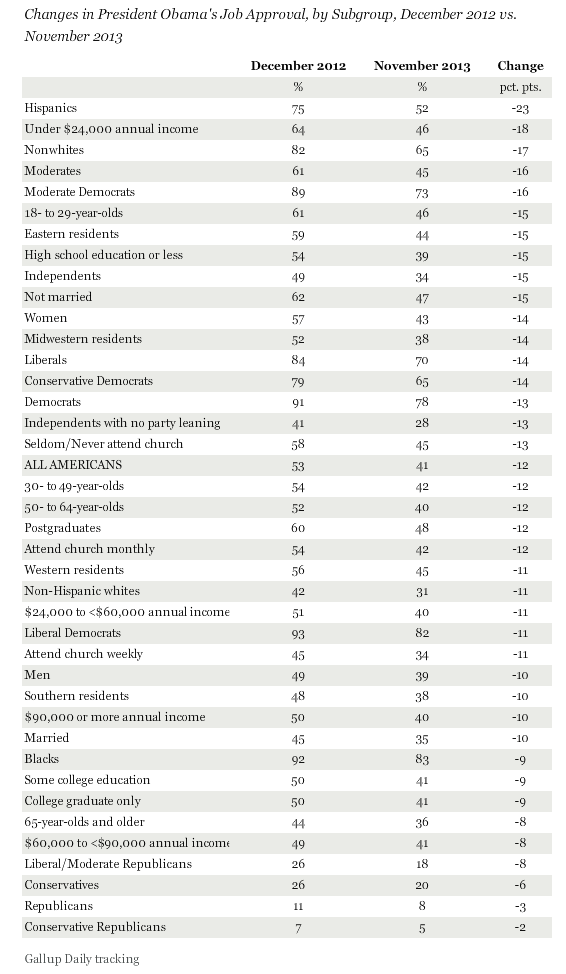 The one place that Obama seems to be holding his ratings were with Conservative Republicans.  Already swimming around in the bilge, these ratings had no place to go.

The Obamacare victim du jour:  Parents of 6-Year-Old With Rare Cancer Agonize Over Health Care Decision After Getting the Obamacare Letter No One Wants to Get:


Five months ago, Paul Porter’s 6-year-old daughter was playing outside on a slide. Later that night while sitting on the couch she complained of a stomach ache. Life changed forever.

Fast forward to present day. Ellie Porter has undergone major surgery, rounds of radiation and chemotherapy — and there’s more to come for the girl that likes to wear flowered headbands.

But the difficulty didn’t end there for the Salt Lake City, Utah, family that has helped their daughter battle cancer for the latter half of this year. In late November, they received a notice regarding their insurance. Porter, a dentist who chose his own insurance, was told his coverage no longer qualified as an acceptable plan under the Affordable Care Act. 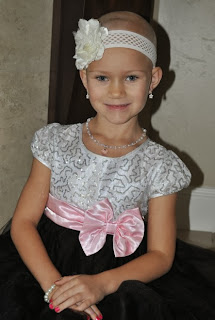 Porter has until mid-month to choose from three options, deciding what’s best for his family and his little girl in the middle of treatment. He could:

1) Keep his current insurance for the next year under the extension that arose from “if you like your plan, you can keep it” outrage;

2) Switch to a compliant plan; or

3) Seek out insurance under the Affordable Care Act.

And Porter did like his insurance, but since the passage of the Affordable Care Act, he’s been worried.

“I was nervous when this all hit because we’ve been a healthy family. We’ve never had to use our insurance before,” he said.

When Porter signed up for insurance, he said he picked a plan they could afford “that would cover us if something catastrophic happened.” And their catastrophic did happen.

Why do Obama and the democrats hate white kids with cancer?  Oh, right....

And about that website?  The Whitehouse turned down an offer by an "internet giant" to build the website for free.


This was confirmed during testimony today before a Congressional committee. Issa, the House Oversight and Government Reform Committee Chairman, said the Obama White House turned down the offer.


Bill Hemmer: Was it proven today that an internet company offered to build the website for free but the government passed on it? Was that true? Did that happen?

Rep. Darrell Issa: It was stated under oath that it was true. No one argued that it wasn’t. The Obama administration blew over a billion dollars so far to build the failed Obamacare website.

Also, internet experts estimated the cost of building the Obmamcare website should have been somewhere in the neighborhood of $5-10 million instead of the $600 million and counting so far:


Different media outlets have pegged the cost to build the cost to build ill-fated Obamacare exchange website at anywhere from $350 to $618 million. According to two tech experts who appeared on Sean Hannity ‘s Fox News program on Wednesday the price should have been more like $5-10 million. Most of the discussion centered on the lack of security on Healthcare.gov, but as Hannity was ending the segment he asked the two experts, David Kennedy, president of database security firm TrustedSec and Luke Chung, president and founder of the software firm FMS.


“If you would have been hired to build this site, how much could you build it for and how much better could it be?” Kennedy answered; “I would say to build a site like this with the infrastructure, the architecture around it, you are looking at maybe $5 million to $10 million at a very maximum rate.”

I'm sure glad 'we' gave the job of building this monstrosity to the failure prone Canadian company headed by a crony of Michelle Obama!

On the other hand, different computer experts claim that the Obamacare website suffered from unrealistic expectations:


The fiasco with the $600 million federal health insurance website wasn’t all bureaucratic. Forcing slow and disparate databases run by government and insurance companies to work together in real time—and then launching the service all at once—would have challenged even technology wunderkinds.

In particular, the project was doomed by a relatively late decision that required applicants to open an account and let the site verify their identity, residence, and income before they could browse for insurance. That meant the site would have to interface in real-time with databases maintained by the Internal Revenue Service and other agencies.

“You could put 100 Google engineers on it, and it’s not going to fix [the fact] that the scope of the project is flawed or fix the IRS system if it’s slow,” says John Halamka, chief information officer of Beth Israel Deaconess Medical Center in Boston. “You don’t want to query 10 downstream systems and be reliant on their performance, because you are only going to be as good as the slowest one.”

I guess the government people should stick with one armed experts...

Sebelius' Department of Health and Human Services held a contest for "young invincibles" to produce a pro-Obamacare propaganda video; ironically, the $2,000 winner was "Forget About the Price Tag."

She may be stupid, and the song sucks is without much merit, but at least she's cute.

Mickey Kaus thinks that what the democrats need is a "do-hickey" that people can use to publicly   display their virtue in having selected insurance through Obamacare:


Back in the early days of hybrid cars, when the Prius was starting to sell, some manufacturers (e.g. Honda) introduced hybrids that looked just like their regular cars. People presumably like the way regular cars look, or they wouldn’t look like that, so sales expectations for the normal-looking hybrids ran high. But they bombed. Why? It seems people who were in the market for hybrids weren’t just trying to save money and the planet–they wanted the world to know they were trying to save money and the planet. The strange-looking Prius did the job. Soon manufacturers were trying to add distinctive hubcaps or grills or bumpers to their hybrids in order to serve this “cueing” function.
. . .
What the Affordable Care Act’s panicked marketers need, it seems, is some kind of badge, doohickey, ribbon, amulet or distinctive coloration that those who’ve bought overpriced Obamacare policies can display to tell their peers they’ve done the right thing. Wear a plexor in your lapel? A blue ribbon around your wrist? Dye your thumb red? Maybe kausfiles readers have some ideas for what this viral welfare state MacGuffin might be. Please submit your designs and proposals to Mickey@dailycaller.com.

May I suggest an "OC" brand on their foreheads?  But then, the plan is really to force us all into it.  Except Harry Reid's aides, Obama's union friends, and the federal bureaucracy.

And a final light note, Mike Collins is one of several Republicans vying for Rep. Paul Broun’s seat in Georgia, and he owns a trucking company. Cue the Enya: