Restaurants all over the country are dealing with a shortage of Maryland crabs.

The stock in the Chesapeake Bay was low this year, which has suppliers looking to other places to keep up with demand.

Angus Phillips, who used to write the fishing and outdoors column for the Washington Post, and Gene Miller normally expect to catch a bushel a day when they go recreational crabbing on a tributary of the Severn River, but this year they're lucky to get enough for lunch. 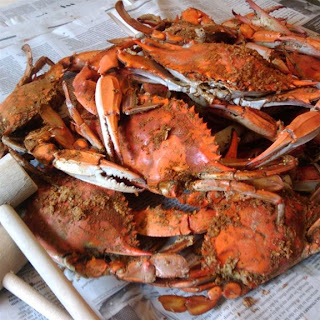 “Normally when we have a down year we’ll see lots of females, lots of little crabs that aren’t big enough to keep,” Phillips said. “This year we're not seeing anything.”

“The taking of females, I’m sure the commercial guys are going to hate me, but sometimes someone’s gotta say, 'No more females,'” Miller said. “Take a year off. See what happens.”

Commercial crabbers are suffering financially from the shortage. Cantler's Riverside Inn in Annapolis buys from six or more crab suppliers, who tell them it is the worst crab season in 20 years.

Crabs are a highly variable fishery, with extreme boom and bust years. Next year could be great year.  But it would be stupid to respond to decreased crab catches by allowing increased fishing and keeping more female crabs, which is what the watermen traditionally propose.
Posted by Fritz at 6:53 PM