A few reactions to Glenn Younkin, Winsome Sear and Jason Miyares sweeping to the top jobs in Virginia. Democrats took it about as well as you might expect. Stacy McCain has a media roundup, ‘These Republicans Are Dangerous’ and Other Stupid Media Election Reactions

It’s official — everybody is now Hitler, or at least the 1.7 million or so Virginians who voted for Glenn Youngkin are “white supremacists,” according to the trauma-induced reactions of the liberal media, who responded to Tuesday’s results with predictable insanity.

and The Weird Logic of Wajahat Ali,  "Got that message, Democrats? White women are the enemy! . . . That’s your 2022 midterm campaign platform. Good luck." And as long as I'm claiming my FMJRAs, the Wombat's In The Mailbox: 11.05.21  has Legal Insurrection: Progressives Rage At “White Women” In Wake Of Virginia Drubbing and Don Surber: Lefties Get Racist & Sexist After Losing On Tuesday. From Mediaite, ‘A Black Mouth Moving’ That ‘Justifies and Legitimates’ White Supremacy: MSNBC Guest Says Winsome Sears Win Doesn’t Make GOP Racially Progressive. I certainly hope not. Insty responds THESE PEOPLE NEED THORAZINE. At PJ Media, Stephen Kruiser thinks the Virginia Election Broke Democrats Worse Than Trump Did.

Kurt Schlichter at Town Hall, After Being Humiliated in VA, Democrats Tell the Voters to Kiss-Off. I'm sure that will help them next time. "As Napoleon supposedly said, never interrupt and enemy when he is making a mistake."
FiveThirtyEight pretends to understand How Virginia’s Electorate Shifted Toward Republicans. John Sexton at Haut Hair examines competing theories on Who won the Latino vote in Virginia? "So the bad news is that we don’t really know for certain right now how Youngkin did with Latinos in Virginia. But again, there is some evidence that Trump’s 2020 improvement with these voters didn’t just evaporate." Also, Glenn Youngkin's top strategists: 'It wasn't just CRT,' it was 'parents matter'
A paragraph or two of caution from OregonMuse's The Morning Rant at Ace's:

I'm glad that Glenn Youngkin won, primarily because just about anyone would be better than that loathsome reptile Terry McAuliffe. But who is Glenn Youngkin, really? Is he more like Ron DeSantis or Mitt Romney? We don't know, but I suspect the latter. We'll need to how he actually governs, actions speak louder than words and all, but given his background in business and finance, I think he's probably one of those moderate, Chamber-of-Commerce type Republicans. You know, the kind the establishment/Deep State just loves, so he's probably not going to be rocking any boats.

But, with much of Virginia being a bedroom community for Washington DC, he's probably the best we can do there. A competent manager is a reasonable hope. Just don't expect any Reagan revolutions or tea parties to erupt.

Also from Wombat's In The Mailbox: 11.05.21  Joy Pullman at Da Fed, Democrats Are Right To Be Scared About Losing The Parent Vote and Legal Insurrection,  Indiana Educator Explains How CRT Is Taught Under The Radar. Ace, CRT Is a Racist Republican Lie and Is Not Taught In Schools, Claim Leftist Political Activist and Education Bureaucrats "Oh Hell Yes We Do Teach CRT -- And We Lie to Parents About Teaching It, Says Indiana Teacher and School Administrator."  Gail Heriot at Insty, AFTER THE VIRGINIA ELECTIONS: I’m still a little giddy about Tuesday’s elections (though Glenn is right about not getting cocky).

But here’s something that I can add: Don’t think electing a governor (or even a conservative state legislature) is going to solve the problem of critical race theory being taught at the K-12 level. The Virginia legislature would be spinning its wheels to pass a statute that says “Don’t teach CRT.” It might as well pass a statute that says “Don’t teach stupid stuff.” Nobody agrees on what constitutes CRT. And we are dealing in part with ideologues who don’t want to agree. They want to teach what they want to teach, and they’ll find a way to say that their chosen curriculum isn’t CRT, no matter how CRT is defined.

And this explains a lot. The "birthing person" of the gender non-binary convicted of raping a girl is the Loudoun County high school girls bathroom using "they's" penis.

Of course. And of course it looks like this. pic.twitter.com/eZWEMz4Mtk

Atop Da Hill, Democrats scramble for path forward after election setbacks. "The enthusiasm of Republican voters and a decisive shift among independents toward the GOP are troubling developments for Democrats who now see their congressional majorities in real danger." At Ace's Quick Hits
Update: Not just a red wave, a red tsunami. At Haut Hair, Capt. Ed reports Sounding the retreat: Democrat campaign committee abandons Florida to DeSantis.
Karen Townsend at Haut Hair reports Here we go: DOJ sues Texas over new voting law. Because the Biden/Garlend DOJ believes in stealing elections. In one of the interesting bits in Tuesday's elections, a truck driver with a minimal budget apparently ousted a powerful Democrat from NJ Senate seat. But Wait! Powerful New Jersey Senate Democrat says '12,000 ballots recently found' support refusal to concede to truck driver (Dan Chaitin, WaEx). Funny how that happens, isn't it? A state should know exactly how many ballots exist an hour after the poll close. Kevin Downey at PJ Media, Public Interest Legal Foundation Sues Over 26,000 Dead People on Michigan Voter Rolls, but dead people wouldn't vote in Michigan, would they?
And in election comedy, 'Fuzzy Slippers' at LI reports Roger Stone Threatens To Run Against Gov. DeSantis Over Election Audit In State Trump Won and Ace reports Adam Kinzinger Is, Get This, Considering Running for President, He Tells His Friends At, Get This, CNN. Good luck!
At Da Wire, Judge Orders Release Of January 6 Defendant After Inspection Shows ‘Mistreatment Of Detainees’ “Does no one care? Does no one follow up?”

Following an impromptu inspection of the D.C. jail, a federal judge has ordered the release of January 6 defendant, Christopher Worrell, over the mistreatment of detainees.

The surprise inspection of the jail by U.S. Marshals took place last month, but the report from the inspection was not made public until Wednesday.

Due to the findings, U.S. District Judge Royce Lamberth said he has “‘zero confidence that the D.C. jail’ will provide the treatment correctly and not retaliate against Worrell,” who has cancer, CNN reported Wednesday.

Lamberth called the jail conditions “deplorable” and “beyond belief,” ordering Worrell transferred immediately to another jail and then released home to start cancer treatment, the report outlined.

Some 400 prisoners are being moved out of the jail after the “deplorable” conditions were uncovered. According to CNN, the Marshals’ report found that water was being shutoff in many cells “for punitive reasons” for days at a time, toilets were clogged, and an inmate who had been pepper-sprayed was “unable to wash the spray off for days, leading to an infection.”

The D.C. Department of Corrections staff were “antagonizing detainees” and “directing detainees to not cooperate with” U.S. Marshals during the inspection, the agency said, and “[o]ne DOC staffer was observed telling a detainee to ‘stop snitching.’” 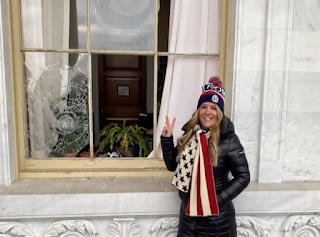 
ATexas-based real estate agent who said she would "definitely not" go to jail for her actions in the Capitol riots because she is white and blonde has hit back at people mocking her after she was handed a 60-day prison term.

Jenna Ryan, 50, was sentenced by U.S. District Judge Christopher Cooper after she pleaded guilty to one count of parading, demonstrating or picketing in the Capitol.

Ryan, who flew in a private jet to attend the January 6 protests in Washington D.C., has become notorious for her social media posts and comments about the riots.

Her rea crime? Althouse,  Federal judge, sentencing a woman to jail, takes her to task for believing in Critical Race Theory.

I'm reading "She said she wasn’t going to jail for Jan. 6, citing ‘blonde hair white skin.’ A judge sentenced her to 60 days behind bars" (WaPo).


“For better or worse, you’ve become one of the faces of January 6,” U.S. District Judge Christopher R. Cooper of D.C. told Jenna Ryan, 50.... “You suggested antifa was somehow involved. And perhaps most famously, you said that because you had blonde hair and white skin, you wouldn’t be going to jail.”

He was referring to a tweet Ryan posted in March saying, “Sorry I have blonde hair white skin a great job a great future and I’m not going to jail. . . . I did nothing wrong.”

But I'm going to stick with Critical Race Theory. Ryan made her belief in white privilege so overt that it threatened white privilege. Attacking her openly stated expectation helps maintain the privilege.

Complicating the analysis: The judge is black.

So just to be Clear.... the black judge SENT her to jail... BECAUSE she was white? AND! there's NO SUCH THING as critical race theory???? got it!

I can hardly wait for the Biden administration's turn in the barrel.

Linked at Pirate's Cove in the weekly Sorta Blogless Sunday Pinup and links. The Wombat has Rule 5 Sunday: Denise Richards ready and waiting at The Other McCain.