Igor Danchenko, you may recall is the Russian national, sometimes employed by the ultra-liberal Brookings Institution, who provided most of the evidence in the Steele Dossier given to the FBI, which was released to the press and widely touted by liberal media outlets and politicians as proof that Donald Trump colluded with the Russians to get elected and was compromised by some scurrilous information in the hands of the Russians and used by the FBI/DOJ to obtain a FISA warrant on Carter Page to spy on the Trump campaign and administration. The dossier itself has been completely discredited, and Danchenko has told the FBI that the stories were largely without merit, being the result of stories Russian friends drinking. 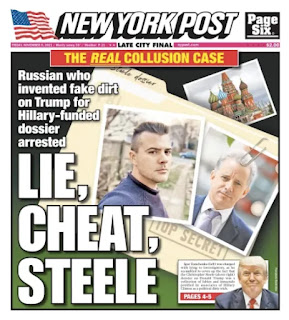 Now, Special Counsel John Durham's grand jury has indicted him on charges of lying to the FBI, asserting that stories Danchenko attributed to Russian drinking buddies, were in, in fact, fed to him by a Clinton factotum, Charles Dolan.

A 2019 report by the Justice Department inspector general found major problems with the accuracy of Danchenko’s information. But the 39-page indictment unveiled Thursday paints a more detailed picture of claims that were allegedly built on exaggerations, rumors and outright lies. The indictment is likely to buttress Republican charges that Democrats and FBI agents intentionally or accidentally turned cheap partisan smears into a high-stakes national security investigation of a sitting president.

The indictment also suggests Danchenko may have lied to Steele and others about where he was getting his information. Some of the material came from a Democratic Party operative with long-standing ties to Democratic presidential nominee Hillary Clinton, according to the charges, rather than well-connected Russians with insight into the Kremlin.

Did Hillary Clinton know about these rumors and direct the operative to pass them to Danchenko, so they could be laundered as "Russian tips"?

Twitchy,  WaPo fact-checker says Durham’s ‘stunning indictment’ means ‘Christopher Steele’s sources were really bad’ (then it gets awkward). Also from Vicky Taft, Woman Who Testified Against Trump Also Introduced Authors of Fake Russian 'Dossier' to Each Other. Gee, What Are the Odds ... ?. Fiona Hill. Andrea Widburg at Am Think thinks The latest Durham indictment is a big one. Maybe. John Sexton at Haut Hair cites Eli Lake: The Danchenko indictment shows the Democratic Party manipulated the FBI, but we knew that. Dan Chaitin at WaEx, Trump White House aide says Durham indictment puts 'deep state' plot on Hillary Clinton's doorstep. Of course she knew; but it will get hard to find people to testify to that. Nobody wants to shoot themselves twice in the head. George Parry at Am Spec,

But these are only the latest developments. Since the last time I summarize Russiagate, Matt Margolis at PJ Media was wondering, Are More Obamagate Charges Coming? Clearly, the answer was yes. Dan Chaitin reported that Attorney general: John Durham remains empowered. "Let me just say first about the money," Garland replied. "We’re now in a new fiscal year, and as everyone knows, Mr. Durham is continuing. So I think you can readily assume that his budget has been approved." Yep. Also, Devin Nunes warns 'future of this country' hinges on Durham indictments and Ratcliffe says 1,000 intel documents given to Durham support more charges.

Regarding Durham's indictment of DNC/Perkins Coie lawyer Michael Sussman, George Parry  at Am Spec calls it John Durham’s Salad Shooter "Knowingingly (sic) concocting a fake narrative to fool the FBI and CIA is going to affect many Hillary Clinton campaign players, special counsel John Durham has let it be known in discovery." Also,  John Durham and the Amazing Disappearing DNC Hack, "Evidence grows that the alleged Russian hacking of the DNC server in 2016 was an inside job"  and John Durham and the Steele Dossier, "Indicted Clinton campaign lawyer Michael Sussmann shrewdly set in motion the use of Christopher Steele of dossier infamy to spread word of supposed Trump–Russia collusion." From Jerry Dunleavy at WaEx, Durham unloads thousands of documents to Sussmann defense, and  Strzok attacks Durham indictment against Sussmann and 'chilling effect' on FISAs. Taking flak, that's how you know you're over the target. Paul Sperry at Da Fed says  Durham Investigates Pentagon Contractors Who Helped Clinton Campaign Plot Russia Hoax,  "Prosecutors are investigating whether cybersecurity contractors abused security clearances to feed the FBI false information linking Donald Trump to Russia." George Parry again, from ET, Exclusive: Poll Shows Independent Voters Want Durham to Probe Biden Aide, Jake Sullivan, who has been in it all up to his neck. But sundance singles out another target, John Durham Needs to Look Toward Mary McCord, who is now working for the Jan. 6 kangaroo committee.

Of course, with Durham taking aim at the Steele Dossier, it's no shock that Democrats and the media (but I redund) are trying to rehabilitate Christopher Steele and his notorious dossier. Spectator World, The name’s Steele, Chris Steele, "The discredited British spy is set to be interviewed Monday by George Stephanopoulos."  ABC, Confronting his critics, Christopher Steele defends controversial dossier in first major interview. John Sexton at Haut Hair, Christopher Steele still defending the accuracy of his dossier, even the pee tape.  Dr, John at Flopping Aces, The Steele interview timing is no coincidence.  Jerry Dunleavy at WaEx, Christopher Steele comes ‘out of the shadows’ for Stephanopoulos interview and Christopher Steele stands by discredited anti-Trump dossier claims about Michael Cohen in Prague and 'pee tape.' Tristan Justice at Da Fed, ABC News Documentary Fails To Rehab Debunked Steele Dossier At Center Of Russian Collusion Hoax. John Solomon at JTN, Steele's defense of dossier collides with an avalanche of evidence to the contrary. "Even statements by Steele's lawyers, his main source and his friends undercut his claim about the "professionalism" of his now-infamous dossier." Sundance, Chris Steele Clings to Fabricated Stories of Cohen in Prague and Trump-Russia Pee Tapes. Debra Saunders at AM Spec, Steele Dossier: The Lie Told Around the World, Again, "Christopher Steele’s bogus smear of Donald Trump served its purposes and it continues to." George Neumayr at Am Spec, Christopher Steele, the Foreigner Who Interfered in Our Election "He is one threat to democracy that the ruling class can overlook." JTN, Soros-tied group met with FBI during Russia collusion probe, hired Christopher Steele "Democracy Integrity Project founder Dan Jones testifies about extensive contacts with Clinton campaign-tied figures, including Michael Sussmann and Glenn Simpson."

WaPoo reports Ex-FBI leader Andrew McCabe wins back pension in Justice Dept. settlement after he was fired under Trump. A fine example of sue and settle. Jordan Davidson at Da Fed, Biden Administration Awards Disgraced Russia Collusion Hoaxer Andrew McCabe With $200K Pension. John Sexton at Haut Hair, Andrew McCabe gets his pension back despite IG finding that he 'lacked candor' under oath, the crime of lying to the FBI, when someone other than a Democrat does it. Jerry Dunleavy at WaEx, Merrick Garland says DOJ stands by conclusion Andrew McCabe lied despite reversing his firing and Byron York's Daily Memo: DOJ memory holes Andrew McCabe wrongdoing.

Elder abuse identified. Fox, Schiff 'heartbroken' by Mueller's decline during Russia probe: 'This was not the Bob Mueller I knew', "'I would not have pursued his testimony with such vigor,' Schiff wrote in new book." Dan Chaitin at WaEx, Schiff 'can't answer' whether cognitive decline disqualified Mueller from leading Russia investigation. Well, if it doesn't disqualify Joe Biden. . . . Althouse, "By all rights, Russiagate should be dead as a serious news story. But as the Real Time episode showed, 'collusion' is still alive for some..." "... and the bulk of the case essentially rests now upon the characterization of one person from the above passage as a Russian agent: a former aide to Paul Manafort named Konstantin Kilimnik...."

Dan Chaitin, Schiff reveals assurance from FBI director under Trump "FBI Director Christopher Wray assured Rep. Adam Schiff he would resign before being pressured into "something that wasn't right" under former President Donald Trump, the congressman claims in a new book." Wray didn't resign, ergo everything was right under Trump. QED. From Natalia Mittelstadt at JTN. Ethics watchdog wants probe of possible improper gift to Senate panel chasing Trump-Russia hoax "The request concerns an almost 700-page report provided to the Senate Armed Services Committee at no cost by an outside group." Sundance, The Modern Weaponization of Our National Security System Is The Lasting Legacy of Barack Obama and Eric Holder. Matt Taibbi, Yes, Virginia, There is a Deep State, "A major untold story of the Trump era has been the political comeback of the CIA, NSA, and FBI, who thanks to an ingenious marketing campaign now enjoy widespread support among young liberals."  Theodore Roosevelt Malloch at Am Great claims to know How to End the Deep State:

First, restrict all government employees to five-year contracts, renewable only twice. For the military this should be 20 years and out, no exceptions. Then put measures into place that all these bureaucrats, appointees, and congressional staffers are not allowed to lobby or ever work for any government contractor or firm that has such contracts.

Second, impose term limits on Congress. Five two-year terms in the House; and, two six-year terms in the Senate. Likewise, no elected officials can ever lobby Congress or serve on the board or as an employee of any firm that does business with the government. Ironclad. The U.S. Congress, like the New Hampshire Legislature, should only be allowed to sit 45 days a year. This will make it a less than full-time assignment and allow all politicians to be part-time and return to their respective Mount Vernons. It will be a people’s republic.

And finally, the budget of the CIA and all other intelligence agencies, including most importantly, the FBI and NSA, should be cut over three years by 20 percent a year. This would work to rein in their excesses and limit their ability to thwart the democratic process.

And some miscellaneous: sundance, The Fourth Branch of U.S. Government Targeted Julian Assange For Kidnapping or Assassination in 2017, A Transparently Obvious Motive Being Overlooked. A little tinfoily.

Julian Assange was not a threat to Donald Trump, but he was a threat to those who attempted to stop Donald Trump.  In 2017, the DC system was reacting to a presidency they did not control.  As an outcome, the Office of the President was being managed and influenced by some with ulterior motives.