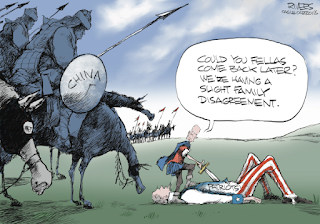 The saga of Steve Bannon and the other Jan. 6 refuseniks continues. US News, Trump Adviser Bannon to Face Criminal Charges for Stonewalling Capitol Riot Probe "Bannon, 67, is expected to surrender to law enforcement in Washington on Monday and make his initial appearance in federal court, according to the Justice Department." What Monica Showalter at Am Think thinks of the Bannon indictment: Joe Biden takes another political prisoner. I agree. John Solomon at JTN, Trump comes to Bannon's defense, says contempt prosecution proof 'USA is a radicalized mess' "Former president suggests ex-adviser being treated tougher than China and Russia." Well, China and Russia are our enemies, so Democrats must be for them. At the Slantic, David Frum frumps, Steve Bannon Knows Exactly What He’s Doing "The fight over January 6 is about much more than the law." Likens Bannon to the Chicago Seven. At HE, Mark Meadows Marked Absent for House Inquisition Deposition Deadline, setting up another confrontation. Amy Wang at WaPoo whines, In wake of Bannon indictment, Republicans warn of payback. Damn straight. Also George Terwilliger opines In abandoning executive privilege, Biden rejects 200 years of history. And Jen Rubin opines Bannon’s indictment should quiet DOJ critics. The left is never satisfied. There's always one, from Mediaite, Former Trump Spox Alyssa Farah Blasts Aides Defying Jan. 6 Subpoenas.

At Am Great, Lloyd Billingsley details The Chutkan Chronicles, "January 6 judge shows preference for judicial abuse." and Julie Kellie publishes A Poem of Persecution and Faith by a January 6 Trespasser. Anxious gets Inside Chris Christie's breakup with Trump over Jan. 6.

And in the real insurrection, Mike Miller from Red State reports the BLM NYC Leader Who Threatened 'Riots' and 'Bloodshed' Walks off Interview When Called Out.

This is the polling equivalent of the moment in “Jaws” when Roy Scheider is chumming the water and the shark finally breaks the surface, giving him his first look at the scale of what he’s dealing with. . . . Democrats are going to need a bigger boat. . . . I know Joe Biden doesn’t drink but he should consider starting. Hoo boy.

PM, Biden's approval and job performance numbers are so bad even CNN has no positive spin left for them. Dan Chaitin at WaEx catches Chris Dodd (one of the pieces of bread in a waitress sandwich), Biden confidant says quiet part 'out loud' about 2024 run for reelection

“I’m hoping the president runs for re-election,” Dodd said, according to a New York Times report published Friday, “but for whatever reason that might not be the case, it’s hard to believe there would be a short list without Kamala’s name on it. She’s the vice president of the United States."

Will he even make it a full term?

Politico whines that the GOP roars back to life in Trump-resistant Pennsylvania suburbs, "The Republican rebound suggests the Democratic suburban slide reaches beyond Virginia and New Jersey." Roger L. Simon claims GOP Leaders Betray Their Voters Over Murkowski. Politicians gonna politic. On Da Hill, Alyssa Farah says she thinks Pence will run for president in 2024 against Trump. I don't see him succeeding. At Da Beast Matt Lewis hopes Could Chris Christie and Liz Cheney Take Trump Down?  I doubt it. At Am Think, Paul Gardiner warns of Guarding against Cheating in Elections by the Far Left. Atop Da Hill, Americans are participating in redistricting like never before, written from a pro-Democrat position. I'll get excited about it when they fix Maryland.

JR Dunn at Am Think thinks about The Left's Bungled Revolution

In the USSR, they had the kulaks. Now, “kulak” means “fist,” and that’s how the word was used in the old imperial Russia. A kulak was a hard guy, an SOB – a landlord or foreman who brutally overworked the peasants, or a moneylender who gouged serfs who took out loans after bad harvests or times of shortages. So when the Bolsheviks showed up and announced they were getting rid of the kulaks, the peasants rejoiced: no more brutal overwork, no more confiscatory interest payments.

But then the meaning expanded to embrace well-to-do peasants – people who owned their own homes or a small plot of farmland. And then peasants with a handful of cattle or horses. Then any peasant who owned a single cow. Eventually everybody got to be a kulak, with an equal chance of ending up in the Gulag.

Today, the equivalent would be “domestic terrorist.” Originally, this meant trash like Theodore Kaczynski or Timothy McVeigh. But this too expanded during the Clinton years to cover cranky religious leaders and backwoods off-the-gridders, and then Tea Party members, and Trump loyalists, until at last it has come to mean… parents of small children.