Election - Is You Woke Enough to Vote?

But first, via the Wombat's In The Mailbox: 11.08.21, Margot Cleveland at Da Fed wonders Why Does Michigan Still Have 25,000 Dead People On Its Voter Rolls? Why do some people save  rubber bands? Because they might have a use for them later. At WaEx, Paul Bedard asks No voter fraud? How about 1,334 cases, 1,147 convictions. And as with most crimes, it's fairly safe to assume it occurs 10-1000 times more often than it get prosecuted. That's why crime pays, and people still commit it. Rabbi Fischer at Am Spec thinks Really, the Polls Stole the New Jersey Gubernatorial Election, "Jack Ciattarelli was robbed." Crime in New Jersey? Whoa!!

Politico fears Republican wave builds to take back the House, "A combination of aggressive redistricting, strong fundraising and a favorable political environment has the GOP excited about its prospects in next year's midterms." NYT (cited at Haut Hair) whines why Why Republicans won in a New York county where Democrats outnumber them. “I don’t like the president, and the Democrats are spending too much money on things like infrastructure, when really we need politicians who are going to bring more money back into this country,” Salena Zito at Am Great, Pennsylvania Leapt Further Right on Election Night, "Republicans made gains in Pennsylvania in keeping with trends in Virginia and New Jersey that reflected Democrats' overreach."

Which is a good segue into the "woke" controversy. The other day, James (the snake) Carville took the Democrats to task for being too "woke" for the electorate. This brought a response from AOC. Stacy McCain, AOC Goes to War With James Carville

You wanted more Democratic infighting? You got it:


The open and proud socialist Rep. Alexandria Ocasio-Cortez (D-NY) declared on Sunday that Republicans have been using wokeness as a means to distract Democrats from pursuing racial justice.
In a series of tweets, the congresswoman said that Democrats believing in a “woke problem” will hurt their chances for reelection because they “rely on the racial justice issue of voting rights.”
“One dangerous aspect of thinking there’s a ‘woke problem’ is that Dem chances for re-election or majorities in House, Senate, & WH rely on the racial justice issue of voting rights,” she tweeted. “Dems distancing from racial justice makes protection of voting rights less likely, ensuring losses.”
According to AOC, the term “woke” has been appropriated by Republicans as a “derogatory euphemism for civil rights & justice,” charging that Fox News not only serves to indoctrinate right-wingers but also to trick Democrats into believing that racial justice is “controversial.” . . . 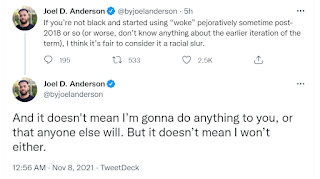 At Da Lid, AOC Attempts To Redefine ‘Woke’ To Slander Conservatives. 'Bonchie' at Red State, Alexandria Ocasio-Cortez Freaks After James Carville Shares an Uncomfortable Truth for Democrats. Ace, Democrat Party Melting Down Over Fundamental Question: Stay Woke and Alienate 90% of Independents, Or Break from Wokeness and Alienate the Democrat Base of Wealthy White College Students, Guilty Wealthy White Suburban Professionals, and Minority Activists, "Begun, the Woke Wars have." David Thompson, Piety Detected. From the Wombat's In The Mailbox: 11.08.21, Da Tech Guy: The Hale-Bopp Comet Democrats. Robert Spencer at PJ Media, NJ State Senate Candidate Who Spent $153 to Win is Already Apologizing to the Woke Mob for mean Facebook posts.  Freddie DeBoer, Please Just Fucking Tell Me What Term I Am Allowed to Use for the Sweeping Social and Political Changes You Demand. Sundance at CTH notes how Transportation Secretary – Forget Gas Prices and Supply Chain Chaos, Bridges and Roads are Racist Chris Barron at HE thinks The Real Lesson from Tuesday is that The Culture War is the Only War that Matters.
My opinion? The liberal/progressives (whatever their preferred nomenclature is this week) invented the connotation of 'better' and 'more enlightened' for their side, and they resent the hell out of it becoming a slur in the hands of deplorables, much like they have to switch from liberal to progressive and back as the words go in and out of favor. Screw 'em and rub their noses in it.
Charlie Kirk, New Jersey’s Edward Durr-The Truck Driver Who Just Provided Our Nation With a Teachable Moment. It ain't always about the money. At Am Think, John Green wonders What Does Election 2021 Tell Us about 2022?

Just like that, the Republican prospects for 2022 are looking pretty good. The Dems have decided to ignore their 2021 losses and the "Let's go Brandon" chants. Instead, they've doubled down and gotten right back to work pushing their massive spending plans. The American people have spoken, and the Democrats have responded by giving them the finger. Twenty twenty-two is going to be bloodier for the Democrats than an Alec Baldwin dress rehearsal. San Fran Nan and Little Chucky Schumer are looking at that flea-infested bed they've made, and the clock says it's almost time to climb in and cuddle up for the night.

At ET, Roger Simon yells  ‘Yalla Brandon!’: How the Jewish Vote May (Finally) Be Changing. I'm not holding my breath.

WSJ, cited at Haut Hair, Youngkin's win offers playbook for Republicans: Parents' rights. Paula Steiner at Am Great, Virginia and the Spirit of ’21, "This election season, Virginians stood against those who seek to destroy our chances of greatness as individuals and a nation." and Ken Masugi at Am Great says Virginia Is for Lovers—of Freedom. Tristan Justice at Da Fed snarks Max Boot Failed Us: Despite His Best Columns, Democracy Died. "Virginia voters were warned. A candidate running on a platform of parental choice in schools and fair elections was the replication of Adolf Hitler’s German rise in 1933. Democracy dies in darkness, and it died in Virginia." From Breitbart, Capehart: Winsome Sears Not Proof GOP Victories Weren’t Motivated by Racism — ‘Whiteness Is a Hell of a Drug’. But Christopher Skeet at Am Think warns Not to Rain on Our Parade, But..., the administrative state won't give up without a long, dirty fight. Chris Bedford at Da Fed, thinks The Battle For Virginia Is Far From Over — And The Hardest Fighting’s Still Ahead, "Glenn Youngkin, good man as he seems to be, is not a stand-in for active and engaged parents. If they leave the field, he will not succeed."

When you tell people that something they see right before them does not exist, you lose their vote. That's what Virginia Democrat Terry McAuliffe did as he campaigned for governor, and, no surprise, he lost. If Democrats continue on this course in 2022, they'll lose again.

Specifically, McAuliffe said of critical race theory, or CRT, on "Meet the Press," "Let me explain: It's never been taught in Virginia."

That's just not true today, as countless parents attest, and it wasn't true when McAuliffe was Virginia governor in 2015.

Twitchy, CNN’s Brianna Keilar insists that critical race theory is not in the curriculum in Virginia, but Sen. Rick Scott brought receipts

FACTS LAST: CNN's Brianna Keilar refuses to acknowledge the evidence Critical Race Theory is an influence in Virginia schools. "Just to be clear, it's not in the curriculum in Virginia. Just to be clear," she repeated like a broken record when presented with the facts pic.twitter.com/7dfR156Zv7