Forget It Brandon, It's Baltimore

Jazz Shaw at Haut Hair, To highlight his success, Biden will point to... Baltimore?

It would appear that somebody on Team Biden has finally noticed that the President’s approval numbers have continued to tank and are not showing any signs of rebounding. With that in mind, now that Uncle Joe is back from his European climate alarmism meetings, he’s being sent on a “national Build Back Better tour” to promote his agenda and convince people of all the good things he plans to do for them. That might turn out to be a challenging sales job while the country is in the middle of a border crisis, a supply chain crisis, skyrocketing fuel prices, rising inflation, and empty shelves in stores. The first stop on the tour is going to be in Baltimore, Maryland today. (I know. I couldn’t believe it either.) Biden will talk about how money from the recently passed infrastructure bill will go toward modernizing the Port of Baltimore and ease some of the supply chain woes the country is suffering under. (Associated Press)

At the Port of Baltimore, Biden plans to lay out the benefits of the $1 trillion infrastructure package that Congress passed last week. The president intends to emphasize how the spending can strengthen global supply chains to help lower prices, reduce shortages and add union jobs, according to a White House official.

Biden plans to hold up Baltimore’s port as a blueprint on how to reduce shipping bottlenecks that have held back the economic recovery from the coronavirus pandemic. The infrastructure package includes $17 billion for upgrading ports — an urgent need as a backlog of ships waiting to dock at major transit hubs has fueled inflation and damaged public perceptions of Biden’s economic stewardship.

The port in Baltimore is adding container cranes as well as a 50-foot berth where ships can be unloaded.

To be fair to the President here, Baltimore does have a major shipping port that could potentially help alleviate the bottleneck of shipping containers awaiting the chance to be offloaded from ships all along our coasts. And the city could certainly use all of the jobs that would come from revitalizing its shipping industry.

But with that said, the projects Biden will be talking about aren’t going to happen overnight. They won’t even happen in the next year. They are not only going to have to dredge and construct a new shipping berth but completely rebuild and expand a shipping tunnel to accommodate more freight. Federal money may allow that to happen, but projects like that take years of planning and construction before any increase in offloading capacity is realized. The supply chain crisis is upon us today, so quicker solutions will be required.

Then there is the ever-present question that arises any time a new influx of money arrives in Baltimore. How much of it will actually make it into the projects being described as opposed to winding up in the pockets of the politically well-connected? Anyone who has watched season two of The Wire (which, as we all know, was more of a documentary than a drama series) could tell you about the infamous levels of corruption and crime that eventually wrecked what was once one of America’s greatest ports. 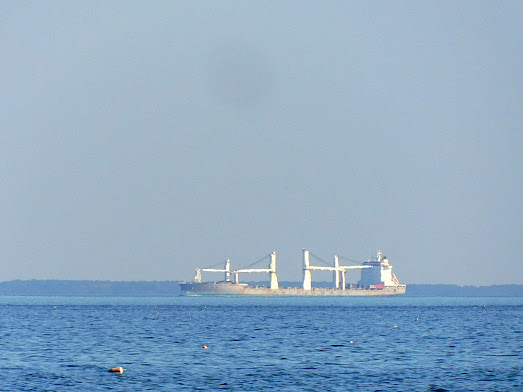 Oh goody, more boat wakes causing erosion on the Chesapeake's endangered islands! ( I told you I could do more of these!
Posted by Fritz at 7:30 PM