Big Fish Have Little Bugs Upon Their Back to Bite Them 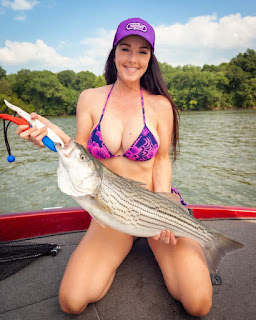 
During the last few months, anglers have been catching fish in the Chesapeake with parasites attached to their bellies and fins. Striped bass and sheepshead are the most frequent hosts. One sheepshead was found carrying over 20 of the unsavory hitchhikers. Some on social media believe the parasites are simply sea lice, but that is not the case.

Hamish Small, an Associate Research Scientist at the Virginia Institute of Marine Science (VIMS) who earned his doctorate in Marine Parasitology, reports that, “sea lice are parasitic copepods, and these (recent infestations) appear to be an iparasitic sopod (crustacean).” Small is sequencing the DNA of these crustaceans so he can determine exactly what they are. If he had to guess, Small believes they are Livoneca redmanii, which are known to be in the Chesapeake Bay. One particularly gross version of these parasites is Cymothoa exigua, which once inside the fish’s mouth attaches to the tongue of the host fish, and eventually replaces the tongue! 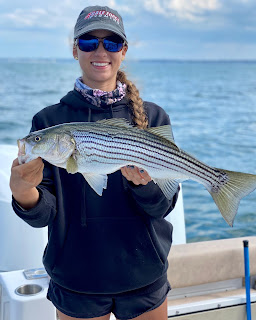 We do occasionally see the "tongue eating" parasite, more often in blue fish and Menhaden than Striped Bass.

According to Small, it is not unusual to find a fish that is carrying a few of these parasites. It is the recently discovered larger numbers of parasites on individual fish that is a cause for concern. “They usually are found in small numbers (single or a pair) within the buccal cavity (mouth) or in the gill chamber of the fish they parasitize, so the current finding of multiple (over 20) on the caudal fin (tail) and caudal peduncle (the narrow part of a fish forward of the tail) of the sheepshead is somewhat unusual. Likewise, another case indicated eight parasites attached to the pelvic fins of a striped bass,” he said. 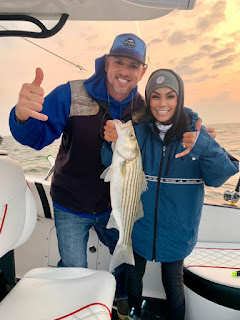 There are also small parasitic copepods that infect fish gill, especially Striped bass, in warmer and more brackish water. They can't be good, but they don't seem particularly associated with sick looking fish. Most fishermen don't even know they are there

These parasites use hooks to hold onto their hosts. That cannot be comfortable, especially in the mouth. Heavy infections, such as on the sheepshead, can cause significant damage to the host fish. Can you eat an infected fish? VIMS said there is no harm to humans. Personally I would donate an infected fish to science and catch another for dinner.

“At this point we can’t really say whether this is something new.” said Small. If it is new, the scientists at VIMS don’t know the cause. If you are an angler, you can help by reporting any infected fish you catch. Try to get a photo, and call VIMS at 757 787-5834.

The fish we catch here in winter and early spring commonly have some kind of isopod on them, and most fisherman call them "sea-lice", which probably just reflects the problem with common names. Most fisherman also think that they are a sign that the fish has recently migrated in from the ocean, although Pete and me are starting to doubt that. Often, after having caught a few fish, the deck is littered with the things crawling around. They certainly wouldn't discourage me from eating the fish.
The Wombat has Rule 5 Sunday: Dina Meyer up at The Other McCain, on time and under budget.
Posted by Fritz at 4:08 PM