Annals of the Biden Crime Family - The Ashley Diary 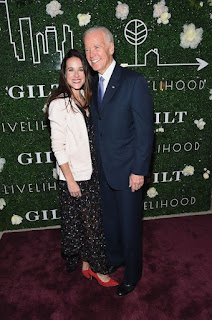 A new scandal is shaking the Biden Crime family. To summarize, Joe's daughter Ashley was in drug rehab (whoda thunk?) prior to his being elected President, and allegedly her diary went missing. She claims it was stolen, others claim it was left behind when she left. I could see the latter, and her believing the former in any event. The diary contained some potentially damaging content to Joe Biden, and, not shockingly, it ended up being shopped around to various conservative sites, and excerpts were published. One site that claimed to be in possession of them, but didn't publish them was Project Veritas, who said because they could not verify their source, they would not publish them, and in fact, offered them back to the Biden family, and law enforcement, and were refused. Last week, the FBI, acting on warrants from the DOJ's Southern District of New York, raided the offices of Project Veritas, the homes of Project Veritas employees, including James O'Keeffe, it's founder, essentially confirming that the diary was, in fact Ashley's, and the NYT was tipped off to the raids (ala Roger Stone and CNN).

Was I molested. I think so — I can’t remember specifics but I do remember trauma,” the author wrote at one point. She also mentions taking “probably not appropriate” showers with her father when she was a child.

Althouse, "People Tied to Project Veritas Scrutinized in Theft of Diary From Biden’s Daughter/The F.B.I. carried out search warrants in New York as part of a Justice Department investigation into how pages from Ashley Biden’s journal came to be published by a right wing website."

National File, Fox News Legal Analyst: Law Doesn’t Care How Ashley Biden’s Diary Was Obtained, FBI Wrong To Investigate. John Hinderacker at Power Line, The FBI and the Stolen Diary  "But an FBI investigation? A year after the diary disappeared and was published? Since when is the alleged theft of a woman’s diary a federal crime? Let alone a federal crime that warrants investigation by the FBI?" Jonathon Turley, FBI Raids Project Veritas Writers . . . Over A Missing Biden Diary?

So why the raids? Since when does the FBI conducted raids over missing diaries?

The FBI can cite the interstate elements of the alleged theft as raising a federal crime. However, what is the crime? It is not clear if they are suggesting that the responsible parties were seeking to sell the diary or that there was some national security element (which would be bizarre since Biden’s daughter was writing before her father ever became president).

Journalist organizations are routinely given material removed from businesses, agencies, or private owners without permission by confidential sources. If this is a federal crime subject to FBI raids, what happened to the new media policies of the Biden Administration after the Tucker Carlson controversy?

There are a host of unanswered questions. Here are five to start with:
Regardless of how one feels about Project Veritas, there should be calls from media outlets for some answers to these basic questions. Likewise, Congress should be seeking such answers as part of its oversight responsibilities.

Insty, The media won’t be asking these, because the media — like the FBI — see their primary role as protecting the Democratic establishment from political threats.

Yes, it sure sounds like they are concerned that the diary will reflect negetively on Greasy Joe, but that's not the job of the FBI to investigate diaries, even diaries possibly stolen from a person who became President afterwards. I hate to say it, but imagine if this were one of the Trump daughters. It's also interesting that they went after one of Biden's critics in the media. I think Merrick Garland needs to be asked about this the next time he dares an appearance on Capitol Hill.

But wait, we're not through; Hunter is the gift that keeps on giving. NYPo, Hunter Biden’s wife seen at SoHo gallery as controversial art show opens. Da Mail, Inside Hunter Biden's controversial art show in SoHo: Exhibition opens with tight security after team of lawyers were brought in to scrutinize potential patrons.  Breitbart, Report: Hunter Biden Secretly Holds Second Art Show in SoHo. Matt Palumbo at Bongino, Hunter Biden’s Paintings Sell for More Than Picasso’s "“You can buy a Picasso, a signed Picasso, for $400,000, which is cheaper than Hunter Biden’s $500,000 paintings,” she said. “So I think possibly that the people who are paying insane prices for Hunter Biden paintings are not really doing it for the art.” Dan Chaitin at WaEx hears Hunter Biden's art dealer predicts paintings, priced up to $500K, will be 'cheap' in 10 years. My prediction is that they'll retain a little historical value "Can you believe this shit?" NewsMax, Ethical Questions Still Loom Amidst Hunter Biden Art Showing. Da Mail, Hunter Biden faces fresh cash-for-access questions after his art dealer – who claims to be the only person to know the identity of president’s son’s art buyers - is snapped wearing Camp David hat. At Da Caller, Billionaire Mega-Donor At Center Of Hunter Biden Art Sales Raises Ethics Concerns. Eric Lendrum at Am Great, Radical Left-Wing Billionaire Funding Hunter Biden Art Shows, Raising Ethical Concerns. Althouse catches the NYT shilling for Hunter, "[Hunter] Biden has described his art as 'literally keeping me sane,' and more than one painting here features text..."

"... detailing his addiction and recovery. ('He began to write a new story,' reads the trippy self-portrait.) The painting of the bald figure bears a citation of the pre-Socratic philosopher Parmenides. Mr. Biden has scrawled these quotes, curiously, in a gold paint marker, the sort of craft-shop instrument beloved of scrapbookers. The gold marker recurs throughout this show, outlining bare trees and mountain ridges, rounded Gaelic characters, and quite a few snakes, some of which appear to have been done with a stencil. The snakes may have some personal significance, molting and rebirth and all that; the symbology may also, more than anything, just suggest being a dude. All of this feels rather random, rather personal, rather ingenuous."

From "Hunter Biden: Emotionally Honest, Generically Smooth/The president’s son has turned to art as a career. 'The Journey Home' is his first solo exhibition" by Jason Farago (NYT).

It's such a transparent ruse to cover Hunter's long standing influence peddling business.

At Da Mail again, Hunter Biden offered to sell US aluminum giant $80,000 'analysis' of Russian oligarch Oleg Deripaska, who’s now under investigation by the FBI, report on laptop hard drive claims, but not to worry, Jordan Davidson at Da Fed reports that the Hayden Center Doubles Down On Blatant Lie That Hunter Biden’s Laptop Is ‘Russian Disinformation’

The Hayden Center’s blatant confession came during a heated Twitter exchange between the organization and the Acting Director of National Intelligence under the Trump administration Richard Grenell.

“Why did Michael Hayden and the Hayden Center push the phony story that Hunter Biden’s laptop was Russian disinformation?” Grenell asked.

A few hours later, the Hayden Center explained that it amplified the false narrative, which aided Big Tech and the corporate media in suppressing the story just weeks before the 2020 presidential election, “Because our founder @GenMhayden and director @LarryPfeifferDC had signed the letter and believed that the partisan leak had ‘all the classic earmarks of a Russian INFORMATION operation.’”

Wa Free Bee, VOA ‘Whistleblower’ Misrepresented Academic Credentials, "Biden rehired Voice of America program review director after Trump fired her for falsely claiming degree from Sorbonne" Cheating and misrepresentation is the Democrat way, after all. It worked for Greasy Joe.

Da Mail asks Working from home? Biden hosts budget talks in Delaware with Chuck Schumer and Joe Manchin as it's revealed more than ONE-THIRD of his first 276 days in office have been spent away from the White House. I don't blame him for not wanting to be in DC; it sucks, but Delaware is scant improvement. But if it keeps him close to his favorite rocking chair. . .  'Bonchie' at Red State reports Jill Biden Steps in to Save a Confused, Meandering Joe Biden at White House Event. Mediaite, Poll: A Plurality of Democrats Say They Want Someone Other Than Biden to Be the 2024 Nominee

So did you hear about the fart heard round the world? Da Mail, Joe Biden or the new Mr Trump? Camilla 'hasn't stopped talking about' hearing the President 'break wind' during chat at Cop26 climate summit in Glasgow. It's the beans in that British breakfast. And as for falling asleep at a climate talk? Let him without sin cast the first stone. I've fallen asleep in climate talks.