On Monday, former Trump White House strategist Steve Bannon surrendered himself to the FBI on charges of criminal contempt of Congress for his refusal to cooperate with the partisan House select committee on the January 6 Capitol riot. Bannon was indicted by a grand jury on Saturday.

Bannon is accused of failing to appear for an October 14 deposition before the panel, and for refusing to provide documents to the committee. He faces a minimum of 30 days in jail, with a maximum of one year if convicted, as well as up to a $1,000 fine for each charge. 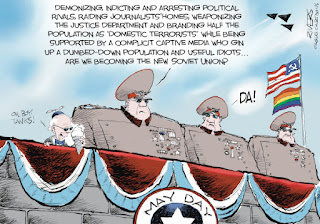 “I’m telling you right now, this is going to the misdemeanor from hell for Merrick Garland, Nancy Pelosi, and Joe Biden.

“Joe Biden ordered Merrick Garland to prosecute me, from the White House lawn, when he got off Marine One,” Bannon alleged, alluding to a politically-motivated prosecution the likes of which America has never seen.

“We’re going to go on the offense,” he added. “We’re tired of playing defense.”

Star News,  Steve Bannon Released from Custody, Calls Contempt of Congress Charge ‘Misdemeanor from Hell’ "During his hearing, U.S. Magistrate Robin Meriweather agreed to release Bannon until he faces trial. However, he will be required to submit his passport and abide with a weekly check-in with law enforcement officials. Furthermore, Meriweather set arraignment for Thursday before U.S. District Judge Carl Nichols." Sundance at CTH has the video, Steve Bannon Speaks After Court Hearing: “This is going to be the misdemeanor from hell” for Democrats. Discovery could prove amusing. News Thud reports ex-Republican Kinzinger says he hopes Bannon indictment sends “chilling message”, because that's what he wants, Democrats sending chilling messages to Republicans.

From the Wombat's In The Mailbox: 11.15.21, Twitchy: Lefty Activist With “Over One Thousand Soldiers Ready To Go” Threatens To Come To Next School Board Meeting “Locked & Loaded”, American Power: The Problem Of Loudoun County Schools and BattleSwarm: Did CRT-Pushing Ariz. School Board Prez Break Federal Law?

At Haut Hair John Sexton observes, This NY Times' story on Loudoun County is pretty slanted. Why would you expect an exception? Across da pond at Da Mail, Loudoun County official brands concerned parents 'alt-right' to the fury of the black and Jewish mums and dads who organized petition to replace board members

Sundance, Scottsdale Arizona School Board Votes to Remove President After Moms Discover Secret Surveillance of Parents and Children. Demoted to ordinary board member. It probably will take an election to remove him, unless he goes to jail for spying.

Indiana teacher explains how Democrats are lying when they claim Critical Race Theory is not taught in schools.pic.twitter.com/2abSuedVlH

Summit News, Video: Rhode Island Teacher Warns CRT ‘Absolutely Everywhere’ In Schools
Gabe Kaminsky at Da Fed wonders Why Are Philadelphia Public Schools Trying To Stop Teachers From Talking To The Press? Center Square, Missouri, Hawley calls for parents' bill of rights for school information. At the Daley Gator again, Would the Left really like to license parenting? Yes, and be able to control what parents teach their kids. No wonder Schools Across U.S. Facing Class Cancellations, Critical Staff Shortages (Da Wire).
WaPoo whines Conspiracy theories are an election security threat, new report says.
Capt. Ed at Haut Hair, WaPo: Dems suddenly realizing that Biden's tanking, too, but YaHoo! says Don't trust the polls: Pollsters are increasingly unable to predict American thought. Probably true, but not the way they want you to think.
At Da Blaze, Winsome Sears says voters are 'tired' of black and white people being pitted against each other, fires back at 'SNL' for gun joke. SNL, it's still on? Mile Miller at Red State explains how Winsome Sears Proves Again Why She Terrifies the Democrat Party.
At Haut Hair, AllahPundit whines about Mike Flynn: We must have one nation under God -- and one religion under God. I'm reasonably certain he wasn't talking about forced conversions like the Taliban. From Mediaite, Jim Clyburn Lambasts ‘Sunshine Patriot’ Michael Flynn as ‘Being Patriotic to This Country Only When the Weather Is Pleasant’
Capt. Ed, BREAKING: Leahy announces retirement in 2022, and Sundance, Vermont Democrat Senator Patrick Leahy, The Longest Serving Senator, Will Not Seek Reelection. I'm sure the Democrats can find somebody crazy to replace him. The state elected Bernie, after all.
Meanwhile, down in Texas, from PM, Anti-gun, failed presidential candidate Beto O'Rourke announces run for governor of Texas. Mock Hispanic. And from The Texan, State Rep. Ryan Guillen, a South Texas Democrat, Switches Parties to the GOP, Wall, handwriting.
AP whines Wyoming GOP votes to stop recognizing Cheney as a Republican and Da Mail, Wyoming GOP votes to stop recognizing Rep. Liz Cheney as a Republican following her vote to impeach Trump earlier this year in recognition of the facts on the ground. Meanwhile, at JTN, Nick Ballasay documents the Trump revenge tour: 13 GOP incumbents targeted for party challenge in 2022 congressional races "There are three additional races that the former president might target by endorsing challengers to Republican incumbents." If you strike at the king . . .
CNN's Brian Stelter aka "puddin" says a New book alleges Fox's Maria Bartiromo shouted at Bill Barr about imagined voter fraud. If so, good, he needed yelling at.
Posted by Fritz at 10:47 AM