You may not know this, but the most gerrymandered congressional map in America is in Maryland right now, drawn to give Democrats 88% of the congressional delegation in a state where Democrats win at most 66% of the vote.

A nonpartisan redistricting commission came up with a new map, which is compact, sensible, and based on communities of interest and county lines. Democratic legislators in Annapolis, led by gerrymandering enthusiast Eric Luedtke, have just passed out of committee a map designed to give Democrats all eight congressional seats.

Luedtke correctly points out that his map is less absurd in some ways than the partisan gerrymander Democrats created 10 years ago, but no honest person would ever say this map is anything other than a naked power grab that flouts all notions of representative government and good governance.

The current congressional map pictured just below ties the Appalachia part of Maryland into the same district as Bethesda, a wealthy, liberal, country-club-packed neighborhood, in order to carve up the rural (conservative) vote in Western Maryland into three different districts. 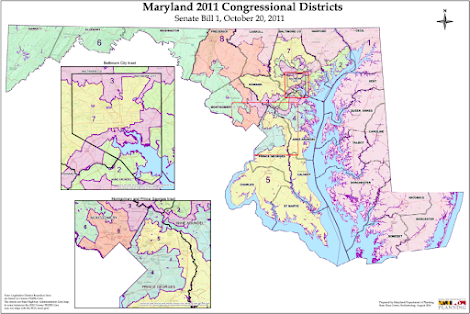 Sadly, from the Democrats point of view, the map leaves the Eastern Shore, a traditionally conservative area, in the hands of Republican Andy Harris.

Here’s how we described Maryland’s congressional map a few years ago.

"The 3rd District is technically all contiguous, but some parts of it can only connect to other parts of it by boat.

"There’s an area just outside the Beltway where you can cross through four congressional districts during a 20-minute walk. At that point, a wart on the back of the 8th District sticks into the tail of the Baltimore-based 7th District, alongside a narrow isthmus connecting the two totally separate parts of the 4th District, right next to the northern proboscis of the 5th District, which in turn stretches two hours south to the mouth of the Potomac."

Since then, the state organized a Citizens Redistricting Commission, which included Republicans, Democrats, and independents. That commission created an eminently sensible map, pictured here: 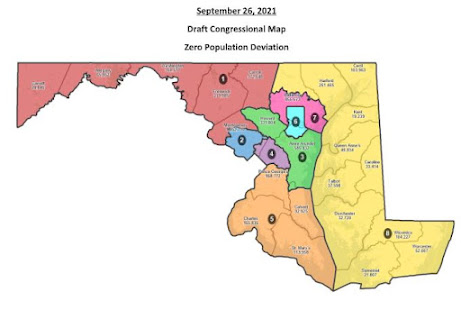 Oh My God! The Eastern Shore, the Western Maryland panhandle, and Southern MD all might go conservative, leaving the urban core to the Democrats. 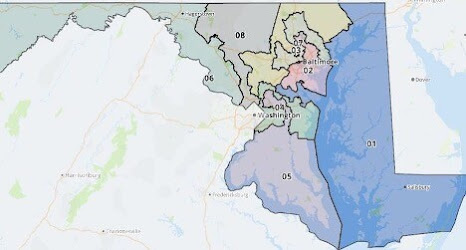 Once again, you have three lower-Montgomery County-to-the-Pennsylvania-border districts, including that lovely Bethesda-to-Appalachia 6th District. The 5th District has a horn, the 4th is two balls connected by a thread, the 7th and 3rd look like they’re melting, and most egregiously, the Eastern Shore district reaches across the Chesapeake Bay into Annapolis, in order to give a fighting chance to lobbyist Heather Mizeur, who is trying to unseat the only Republican representative from Maryland, Andy Harris.

I don't want to hear any more whines from the WaPoo about Republicans unfairly redistricting North Carolina. No taxation without representation!