The Election Post: There Once Was a Man on Nantucket

Whose head was an empty bucket. Jack Murphy at the Neon Nettle notes Biden Given the Middle Finger While Visiting Nantucket on Thanksgiving Day, but that's fair enough, because Joe Biden Moves to Completely Screw You at the Pump ('Bonchie' at Red State).

CNN is concerned that Trump pulls strings behind the scenes to help loyal 2022 candidates, and at Star News, Cook Political Report Shifts Democrat-Held Georgia, Arizona and Nevada Senate Seats to ‘Toss Up’.

Brad Raffensperger (remember him?) whines One Year Ago, Trump Called Me an ‘Enemy of the People.’ Rising Costs and Inflation Are the Real Enemy. Both can be true. FWIW, I think Trump went a little far calling him an enemy of the people, but Raffensperger could have done a lot more to protect Georgia unlegislated changes in the voting rules, and potentially massive mail-in voting fraud.

Also at the Neon Nettle, ‘Woke’ Criminal Justice Group Claims Term ‘Looting’ Is Racist. But I agree, the flash mob robbing of upscale stores isn't "looting", it's something else, far more evil. At PM, Seth Rogen ROASTED for urging people to get used to big city crime and break-ins.

Meanwhile, from the NYPo, the administration focuses on the big problems, as AG Garland orders tougher crackdown on rowdy airline passengers. Am I going to get on a watch list for publicly grumbling about having to wear a fucking mask for 15 hours even though I'm "fully" vaccinated? Jerry Dunleavy at WaEx points out how Republicans point to number of times Garland has politicized the Justice Department, and Matt Margolis at PJ Media (VIP) says Yes, Merrick Garland Has Politicized the Department of Justice

WJ, Unseen Jan. 6 Interview: I Saw Police Moving the Barricades, Letting People Into the Capitol, which makes their usual charge of trespassing a little more tenuous.

Seattle Times observes Bannon’s lawyers file opposition to keeping documents from being released. Unlike the government, he apparently has nothing to hide.

Jazz Shaw agrees with me on redistricting, Democrats are suddenly concerned about gerrymandering when Republicans do it. Well, I've lived in California and Maryland.

There’s always something of a debate over which states gerrymander the maps the worst, but Maryland and North Caroliner are two of the top contenders. Maryland still has some districts that would have given Hermann Rorschach nightmares. But you’ll notice that you never heard the Democrats complaining about those maps, did you? Of course not. And we can say the same for several of the red states where Republicans have conveniently carved up the state in a way that maximizes their odds of success.

Elbridge Gerry had nothing on MD Democrats, check out districts 3,4, 7 and 8. 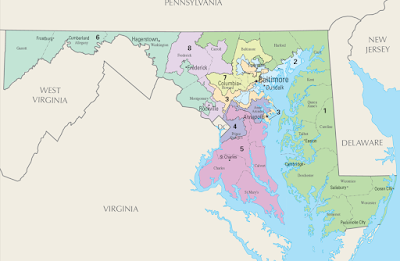