Election Post - The Sprint to the Finish Line in Virginia 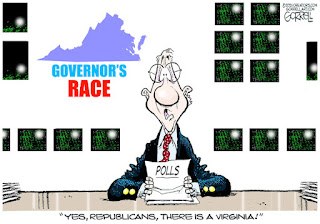 The NYT, cited by Haut Hair puts on a brave face with Both sides claim momentum in final days before Virginia votes. Don't they always? TNP has a word of advice, A Word of Warning  That Fox News Virginia Poll: Don’t Be Complacent. "Youngkin may be ahead 8 points in a single Fox News poll, but the data might suggest it's not reliable." Always good advice. In Virginia, most of the Democrats have already voted by mail (some maybe more often than others). If you're a Republican in Virginia, get to the polls, and bring a friend if you can. Across da pond at Da Mail, Democrats fear LOSING Virginia as polls tighten and Republican gubernatorial challenger Youngkin SNUBS Trump by refusing to take part in his tele-rally in the state Fortunately, the elections will be over in a few days, except for the inevitable recriminations and calls for audits.

Clarice Feldman at Am Think thinks (no, not yet) that Something Big is Coming. Chris Barron at HE, claims Virginia is A Republican Road Map to Win Back the Suburbs. Politico highlights The suburban Virginia block that explains how Democrats might be about to blow it. NBC blames the WuFlu, In a tight Virginia race, Covid concerns still make campaigning difficult for Democrats, "While Republicans have more or less kept up normal operations, Democrats face anxiety from volunteers and elaborate safety procedures." Hoist on their own petard! 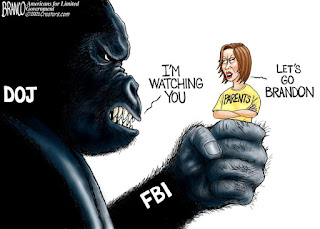 So, apparently Terry McAuliffe went for what should be a friendly, sympathetic interview with Chuck Todd on 'Meet The Press', and dug himself a few more holes. Sundance at CTH, Sunday Talks, in Virginia Race Terry McAuliffe Says Things Were Fine Until Parents Started Sticking Their Noses Into What Happens in Schools, with the full video, of course. At Red State Sister Toldja claims Chuck Todd Sticks a Fork in Terry McAuliffe in Heated Exchange on Education Comments and Rebecca Brown Terry says  McAuliffe Lies His Way Through Sunday's 'Meet the Press' Interview. From Breitbart, McAuliffe: Parents Should Not Pick School Books — ‘We Have Experts’ Who Do That and Robert Spencer at PJ Media, McAuliffe: Parents Shouldn’t Pick Textbooks, ‘We Have Experts Who Actually Do That’ If you want to pick your kids text books, you have to home school, but if you want to wrench control of their educations out of the hands of sociopathic leftists, you need to vote Republican.

Terry McAuliffe's closing argument is that critical race theory is a "racist dog whistle" that has "never been taught in Virginia." But I can debunk this lie—and prove that McAuliffe himself was the first Virginia governor to promote CRT.

It’s truly bizarre. Unlike Youngkin, McAuliffe has taken a novel approach to trying to pick up support. He’s decided that he will not only insult a voter’s intelligence but that he’ll also dig a deeper hole by insulting voters themselves – and then expects them to say “more, please.”

At Breitbart an Exclusive — Glenn Youngkin calls Terry McAuliffe the ‘Godfather’ of the ‘Modern Day Progressive Democratic Party’, in the Puzoian sense.

And let the tiki torch be our escutcheon. We don’t want to parade around like The Great Race’s cackling Dr. Evil in artistical black, or like today’s Antifa regime shock troops that curiously have chosen the same color uniform as the SS. We don’t want to parade around virtue-signaling in our electric cars, or taking offence at the least little thing. Instead, we hold high the symbol of the ordinary suburban barbecue: the unremarkable tiki torch. Available at WalMart. Of course, as you would expect, there are many alternatives to the basic 4-pack suitable for peaceful protesting alongside campaign buses, including one, for $58.95, that sports a carved image of a primordial god.


It makes sense that the top of the ticket in Virginia’s state election Tuesday gets most of the national attention. The fact that Terry McAuliffe is both a former governor and before that a Clinton bagman makes the race compelling to journalists. But the GOP candidate for lieutenant governor deserves a lot more attention, especially since she has a reasonable chance of winning her race, too.

I wonder why the legacy media has so little interest in Winsome Sears? Could it have anything to do with the fact that she is a Black, female, conservative, Marine veteran?

At Mediaite, Jim Acosta Calls Carlson’s Upcoming Special ‘Proud Boy Porn’‘ - Let’s Go Tucker’ Well, he needs something to keep him going after Trump. Oliver Darcy at CNN calls it Fox News' Tucker Carlson problem, better ratings than CNN. At Da Fed, Tucker Carlson says Neocon Karen Liz Cheney Isn’t Just A Liar, She’s Also A Coward after she demanded Fox cut his special, but wouldn't appear to talk about it. At Newsweek, 'Pure Evil': Republican Adam Kinzinger Blasts Tucker Carlson for 'Abusing' Viewers' Trust. And from JD Davidson at Da Fed, Turns Out Alexander Vindman Is The Dopey Hack We All Thought He Was, after he calls for censoring Tucker. You have to admit he makes the right enemies.

J Michael Waller at Am Great reports Americans Don’t Buy the Insurrection Narrative "Two polls show few Americans believe the January 6 riot was a “coup” or “insurrection.” And the numbers are declining. " Expect the media to start shouting it louder. And from Breitbart, an Exclusive – Rep. Mo Brooks: Stephen Colbert Lies. I Wore Bulletproof Vest on January 6 Because of Threats Against Me from BLM, Antifa

“Stephen Colbert — and it seems like the entire left-wing — they just lie freely,” Brooks stated on SiriusXM’s Breitbart News Daily with host Alex Marlow. “On January 6, at the Ellipse rally, which is one-and-a-half miles from the United States Capitol, I wore an armored vest, a bulletproof vest — although technically, they’re not really bulletproof, but they help — and I wore it because the socialist left-wing radicals in society have uttered any number of threats of violence — to include death — against members of the United States Congress, including myself.”

Brooks recalled the mass murder attempt carried out by James Hodgkinson, a leftist supporter of Sen. Bernie Sanders (I-VT), against Republicans in 2017 at a practice game for a charitable event.

He stated, “And I’ve been shot at before on the baseball field. So you’ve got to take these threats seriously. Certainly, if you saw the carnage — five innocent people getting shot by a socialist madman — then you have to be concerned, and my office had received from the Capitol Police warnings [and] advisories that we needed to be a little bit safer because of threats from Black Lives Matter, Antifa, or [other] socialist left-wing [groups].”

Twitchy, NBC News’ Chuck Todd shares polling ‘filled with some scary news’ for Biden and the Dems, and from sundance Devastating NBC Polling Highlights Collapse of Support for Biden and Democrat Party Overall – Also Majority of Public Do Not Support Vaccine Mandate Some voter remorse?

1. The DNC Controlled All Poll Watchers for 40 Years

I had to read this section of the book two or three times to absorb what it was saying. I couldn’t believe it could possibly be true. Yet it is: “Shockingly, the 2020 contest was the first presidential election since Reagan’s first successful run in 1980 in which the Republican National Committee could play any role whatsoever in Election Day operations.”

This section in chapter 1 goes on to explain how such an insane thing could be real. Essentially, after Democrats accused Republicans of cheating in a New Jersey race in 1981, a judge banned the RNC from poll-watching and voting litigation everywhere in the country, then kept re-upping the order until 2018, when it finally expired three years after he died.

This handicapped Republicans for almost 40 years while Democrats were free to do things Republicans couldn’t, like give boosts to their voters all along the voting process and track them extensively, challenge ballots, document irregularities, and sue over election disputes.

Unbelievable, yet true. BO Newsome at Am Great read it too and came away knowing  How the 2020 Election Was Rigged. At Da Caller, one Suburb Of Philadelphia Mailed Out Nearly 700 Ballots To The Wrong People, or chickenfeed as Democrats would call it.

HE notes how #MeGovernor...Letitia James Seeks to Replace NY Governor She Helped Force Out. It's just New York. They tend to vote poorly.