Let's start with the Texas voting law fight. Rich Lowry at NR explains The Texas Voting Lie "None of the bill’s provisions would actually prevent anyone from voting, no matter what Democrats say." That's not quite correct. It might actually prevent some people who are not supposed to vote from voting, and that's why Democrats are as mad as wet hens. And Republicans have shown a willingness to make reasonable changes, Texas Trib, Republicans say they’ll tweak part of Texas elections bill criticized for impact on Black churchgoers "The provision deals with the window for early voting on Sundays, and the current version of the bill raised concerns that it would hinder get-out-the-vote efforts by Black churches."  CNS News cites Biden: 'Simply Un-American' for States to Pass Voting Reforms That Boost Election Security.  And speaking of voter suppression, Schumer-aligned dark money group faces IRS complaint over attempt to suppress GOP voter turnout, "Deceptive Facebook ads targeted Republicans, including Sens. Josh Hawley, Mike Braun." At WaPoo, former conservative Max Boot opines The Republican plot to steal the 2024 election by trying to stop illegal voting.

Dan Chaitin at WaEx has the story on the  Alarm goes off in Fulton County warehouse containing 2020 election absentee ballots "Security guards did not find anyone inside the building, according to the Atlanta-Journal Constitution. Still, Fulton Sheriff Pat Labat said during a press conference he is "3,000% confident and [I] understand that the ballots are secure."" 3,000%! Now I'm sure there there was some funny business.

Insty, WASHINGTON POST: Trump has grown increasingly consumed with ballot audits as he pushes falsehood that election was stolen. "Of course, the WaPo told us the claim that the Wuhan virus came from a Chinese lab was a falsehood, too."

Fox, Henhouse. WaPoo crows Harris’s biggest role yet: Preserve, boost voting rights  LI, Joe Biden Putting Kamala Harris in Charge of Protecting ‘Voting Rights’. Breitbart, Beto O’Rourke: Biden, Dems Have to Pass the ‘For the People Act’ — ‘Do or Die for America Right Now’. John Lott at The Political Insider, America The Outlier: Voter Photo IDs Are The Rule In Europe And Elsewhere, also at Am Great. Matt Palumbo at Bongino, Nearly Every European Country Requires Voter ID. Hey, I have an idea, let's be more like Europeans, and institute mandatory voter ID!

WaPoo whines Pressure mounts on Manchin as ‘panic’ sets in among Democrats over voting rights. From the Wombat's In The Mailbox: 06.02.21, Weasel Zippers: Biden Swipes At Machin & Sinema During Presser, and Capt. Ed at Hot Hair, Biden: I'm getting mighty tired of Manchin and Sinema voting with Republicans

A lame attack, but what else can one expect from a president who promised bipartisanship and then tried to govern by brute majoritarianism? Frustrated by a lack of progress in Congress, Joe Biden accused Kyrsten Sinema and Joe Manchin of voting more often with the GOP than with their own party. That’s demonstrably false, but Biden apparently wants to signal open season the pair — and on the filibuster . . .

What does Joe mean by “white supremacy”? People who didn’t vote for him — it’s really that simple. Thirty-seven people were shot in Chicago over the weekend, but Biden has no plan or policy to solve that problem because (a) Illinois isn’t a “swing state” and (b) the people doing the shooting in Chicago are not Trump voters, IYKWIMAITYD.

Also from the Wombat's In The Mailbox: 06.02.21, the Weasel Zippers tell us that Prosecutors Drop Case Against Man In “Capitol Riot” First of many?

The dismissal of the case against Christopher M. Kelly was disclosed on Wednesday, the same day prosecutors secured a second guilty plea by one of the more than 450 Capitol riot defendants.

U.S. Magistrate Judge Zia Faruqui agreed to dismiss the case against Kelly after prosecutors said in a court filing on Tuesday that they discussed the merits of the case with Kelly’s lawyer and decided that ending the prosecution “serves the interests of justice” based on “the facts currently known to the government.”

As it became increasingly obvious that the votes didn’t exist in the Senate for the formation of a 9/11-style commission to investigate the January 6 Capitol Hill riot, some Democrats began urging President Joe Biden to whip out his pen and his phone and just create such a commission on his own. While the idea had already gained the endorsement of some of the further left agitators, the White House hadn’t committed to the plan. As of last night, the idea seems to have dropped off of the agenda because House Speaker Nancy Pelosi said she would be taking a pass on the plan. There are still some options remaining, but none appear to be anywhere near as grandiose as what was originally being envisioned.

Dan Gerelnter at Am Great wants us to Elect the January 6 Protesters to Congress. "Send the January 6 protestors back to Washington as our elected representatives. Give the D.C. establishment something to get really frightened about."  I'm OK with that. CNS News reports Judicial Watch Sues to Obtain Records in Fatal Shooting of Ashli Babbitt by Capitol Police Officer. Good, Judicial Watch has a good record of prying data out of the unwilling hands of the Feds. 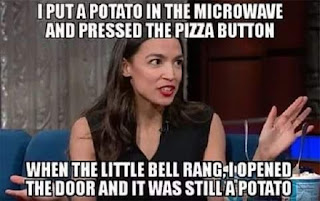 And Democrats of identified the next Immanuel Goldstein, Becky Noble at The Political Insider, Democrats To Cast Marjorie Taylor Greene As The GOP Villain For 2022. All parties have a few loose screws, but the Democrats have a glass house when it comes to casting this stone.

Coverage is likely to be sketchy for the next couple of day, as we head to Pennsylvania over the weekend. I may have time for a DIY version in the morning, though.