On the Ninth Day of Christmas, Election 2020 Gave to Me

Carol Brown at AmThink, Don’t expect Mike Pence to save us on January 6. I didn't. Herr Professor Jacobsen elaborates in January 6 – No Mike Pence Can’t Just Reject Electoral Certifications. "Note the words in the Constitution: The President of the Senate “shall … open all the Certificates” and “the Votes shall then be counted.” Shall is mandatory, there is no discretion." But, Christian Datoc at Da Caller notes Biden Overruled Objections To Trump’s 2017 Electoral College Win — Will Pence Do The Same For Biden? His Office Won’t Say

And as for Josh Hawley's attempts? Breitbart reports Mitt Romney Slams Josh Hawley over Planned Electoral College Objection, which is certainly a point in Hawley's favor, while never Trumper,  G.W, Bush's former chief speechwriter and current WaPoo columnist Michael Gerson called Josh Hawley’s heedless ambition is a threat to the republic. Carol Brown again, McConnell exerting pressure against Hawley. Marlo Safi at Da Caller, Mitch McConnell Calls Jan. 6 Vote ‘Most Consequential I Have Ever Cast’ In Call With GOP Senators "McConnell describes his upcoming vote as “a vote of conscience,” sources told Anxious." Also Anxious McConnell slaps back Trump — repeatedly. Soon enough, he may be liberated from having to lead the Senate. But as Jordan Davidson at Da Fed reminds us Dems Call Hawley’s Election Concerns ‘Coup Attempt’ After Objecting To Every GOP Certification This Century. 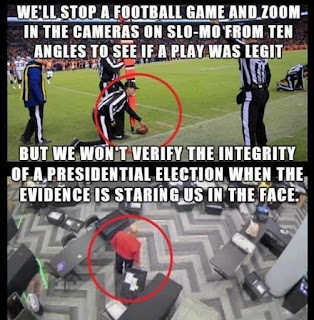 From the Wombat's In The Mailbox: 01.01.21, John Hinderacker at Power Line asks : How Much Voter Fraud Was There?

Over the next two years, the election will be investigated and books will be written. Some will argue that Donald Trump actually won the election, while others will try to show that Biden’s victory was legitimate. In all likelihood, the question will never be definitively resolved, but the questions about Biden’s legitimacy probably will grow.

Will that scenario bring about demands for electoral reform so that future elections do not end in a cloud of doubt? I hope so, but I doubt it, at least in states where Democrats have substantial power. The Democrats like voter fraud. That has been true for a long time. In 2020, they saw how helpful to their cause lax voting procedures, that both enable fraud and make it hard if not impossible to prove, can be. They will fight tooth and nail to preserve their fraud advantage in future elections. All of which could make the bitterness over last year’s election a mild preview of things to come. 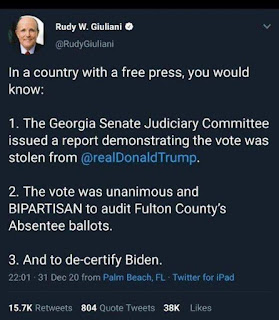 
In a statement, the lawmakers listed the following reasons for their decision:


Accepting ballots past 8:00 pm on Election Day
Not properly requiring signatures to match those on mail-in ballots or requiring dates
Meanwhile, the matching of signatures was required at a polling site
Authorizing the curing of mail-in ballots with less than a 24-hour’s notice
Only some counties were informed and adhered to this order leaving voters treated unequally from county to county
Authorizing the use of unsecure drop boxes, which is not permitted in statute
Prohibiting certified poll watchers overseeing the canvassing of ballots in Philadelphia

“Until these unlawful practices are acknowledged and corrected, we cannot agree to support electors chosen based upon an inaccurate total vote count. The voters of Pennsylvania deserve integrity in the election process and equal protection under the law,” they said.

Jordan Peterson again, Trump Appeals To SCOTUS To Declare Wisconsin Election Results ‘Unconstitutional And Void’ and expecting a bullshit "no standing" or "too late (laches)" response.

In the Georgia Runoffs, Scott Morefield at Da Caller has Ossoff channeling China Joe, Ossoff Gets Defensive With Peter Doocy For Pressing Him On Chinese Communist Party Business Ties ‘C’mon, Man!’:, at Da Wire, Perdue To Self-Quarantine After Close COVID-19 Contact, Says He’ll Do ‘Whole Lot Of Virtual Campaigning’, the NYT (cited at Hot Air) whines that Georgia Republicans Deliver Persistent Message: Fear The Democrats, as well they should. To try to win is racist! Star Parker at Am Great has Lessons Georgia Voters Can Learn From CaliforniaJake Dima at Da Caller reports that Republicans Have Doubled The Number Of Poll Watchers For Georgia Runoffs, Officials Say. It's a start.

By the same standard of statistical analysis that the left applies to everything, it is easy to prove that the election was stolen from Donald Trump.

Not a high bar.  Alex Nitzbert at JTN, Trump campaign wants to air evidence to Americans before Congress certifies election "These are the specific types of evidence that we want to be able to present to the American public on the national stage and not allow local politicians to sweep it under the rug," Paul Vedard at WaEx finds Democrats more gloomy than ever, despite Biden’s Electoral College win Daniel Bobinski, at UncoverDC, in Calling the Presidential Election – and Beyond predicts Trump wins and:


What happens between now and inauguration day, and in the weeks following, will not be pretty. I believe tensions will rise sharply after Jan. 6, and when it’s finally announced that Joe and Dr. Jill will not be moving to 1600 Pennsylvania Avenue, you can expect to see violence across America like you’ve never seen before. The Deep State, both the vanguard in Congress and their Marxist street guerillas, will not like being Trumped a second time.
. . .
Anyone who’s thinking ahead has already stocked up on essentials. That includes a few months’ worth of food, medicine, and yes, toilet paper. We can pray that it doesn’t happen, but several sources with decades of experience in our nation’s intelligence agencies told me they expect approximately 300,000 ruffians to hit the streets and vent their anger at the news of Trump’s 2nd term, and they expect the violence to be intense and widespread.

As for Kurt Schlicter, My Prediction for 2021 Is Pain. I hope not.

Big Tech is at it again.

Facebook has shut down the ad account for the Georgia Battleground Fund, a joint fundraising committee for NRSC, @Perduesenate, and @kloeffler.

This is unacceptable with only 4 days to Election Day.

and from Sundance at CTH, You Can’t Make This Up – Hours After Blocking Section 230 Big Tech Reform Effort, Senate Republicans Complain About Big Tech Censorship "Literally within moments of their veto and Section.230 rebuke, the same NRSC is on their social media account complaining about Big Tech censorship:" You get what you vote for. If you're lucky.
And in our favorite disputed House race, Iowa's 2nd, Pelosi to “Provisionally Seat” Iowa Republican Despite Challenge From Democrat Who Lost By Six Votes (Mike LeChance at LI) "Would have been awkward for Pelosi not to seat the Republican who was certified the winner, considering just days later the Congress will consider challenges to Biden elector certifications."
Linked at Pirate's Cove in the weekly Sorta Blogless Sunday Pinup and links.
Posted by Fritz at 10:59 AM