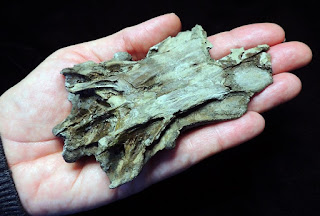 The Baynet: New Species Of Fossil Found Along Calvert Cliffs

On April 27, 2019, local fossil enthusiasts Stephen Groff and Marcus Jones found a partial skull of a fossil fish along Calvert Cliffs. Little did they know at the time that it would turn out to be the find of a lifetime.

Using a microscope, needles, and fine brushes, Groff carefully removed the entombing sediments from around the 10 million-year-old bones to reveal a true treasure. This fossil-find consisted of the bony braincase of a cobia – the first ever found in the fossil record. The only known species of living cobia is a marine inhabitant that occurs nearly worldwide in a variety of tropical, subtropical, and warm temperate habitats and occasionally enter estuaries, feeding on crustaceans, cephalopods (squid and their kin), and other fishes. The hand-sized fossilized partial skull was different enough from the living cobia that a new species was named in honor of Groff and Jones, and published recently in the Journal of Paleontology.

Fossils from boney fish aren't all that uncommon here. We find teeth of various sorts, drum or porgy mostly, but occasionally something bigger and badder like a barracuda or wahoo, also vertebrae, and the hyperostoses we call Tilly bones, but I have yet to see a piece of skull like that. But from the picture at the link, it sure could have been on Matoaka.

Calvert Marine Museum Curator of Paleontology Dr. Stephen Godfrey, along with fossil-fish expert Dr. Giorgio Carnevale of Torino, Italy, named the new species of cobia Rachycentron stremphaencus. When paleontologists describe a new fossil species, one of the perks is that they get to invent a new name for the new species – and they can name it just about anything they like! In this situation, it seemed most fitting to name it after the co-discoverers. So, the new species name “stremphaencus” is derived from a combination of the letters of “Stephen” and “Marcus” with some rearrangement of the letters to make it mellifluous. 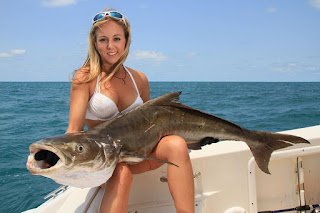 Cobia come into the Bay, and most years a small fishery for them develops in summer down near Point Lookout and further south. This past summer, quite a few were caught by trollers and chummers out in the waters off our shore.

Up until now, no species of cobia had ever been named in the fossil record, so this is a first, and big news for paleontologists, both amateur and professional. When asked about the find, Jones said, “It’s a privilege to be able to participate in such an exciting field.”

Groff and Jones found the braincase in a block of sediment that had fallen onto the beach from the adjacent cliff face. When asked about the find, Groff responded, "It wasn't until the next day when I returned with Calvert Marine Museum Paleontology Collections Manager John Nance to collect the specimen, that we realized it was a skull, and it was then that I knew this was going to be something special."

I'd still like to catch one, but a fossil would be OK, too.

The Wombat has Rule 5 Sunday: Julie Strain, RIP and ready for your digital amusement.