Election 2020: Don't Let Your Guard Down

Military.com tells us  National Guard Plans to Ask Thousands of Troops to Remain in DC Until Mid-March. Stacy McCain wonders Why Are National Guard Still in D.C.? A show of force against the "deplorables" of course. Matt Vespa at Town Hall, Hey, Dems, You Won't Have to Dig Deep to Get to the Bottom of the National Guard's Eviction at US Capitol

Yet, it’s not going to be hard to figure out why this slap to the face occurred to our men and women in uniform. Democrats—you run this town. The commander-in-chief is a Democrat. You’re not going to have to dig deep on this one. 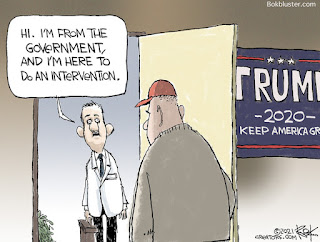 Virginia Kruta at Da Caller, ‘We Don’t Have To Guess About Where This Goes’: Tulsi Gabbard Issues Warning About Domestic Terrorism BillAt PM, Tulsi Gabbard asks Biden to denounce the targeting of all Trump supporters. I'm guessing Joe will deny he's doing it, as he's doing it. What, being a domestic terrorist isn't illegal yet? Green Glenwalt warns The New Domestic War on Terror is Coming "No speculation is needed. Those who wield power are demanding it. The only question is how much opposition they will encounter." Sundance at CTH,  DIA Purchasing Smartphone User Location Data Without Search Warrants. WaPoo happily informs us that Police Chiefs vow to root out officers with extremist ties, or whoever the SPLC considers an extremist. Althouse alerts us Will Wilkinson, cancelled for tweeting, "If Biden really wanted unity, he'd lynch Mike Pence." I had no clue who Wilkinson was, and if he's on the left, he needs canceling.

Of course, today is the day House to send article of impeachment to Senate (WaPoo). Senator Cornyn: Trump’s Second Impeachment Trial “Strikes Me As A Vindictive Move” (KT, Hot Air). No shit, Sherlock. Atop Da Hill Rubio says the  Trump impeachment trial is 'stupid' and from WaEx, Rand Paul: Trump Senate impeachment trial an 'illegitimate procedure' without John Roberts and asks Are They Going to Impeach Bernie Sanders for Inciting the Guy Who Shot Steve Scalise?  (Breitbart) Good question. And from across the pond at the Guardian, Senate Republican threatens impeachments of past Democratic presidents. Which reminds me of my plot to impeach Vice Preznit Biden on China and Ukraine the minute the GOP wins the House back in 2022. But the Senate would never convict. Althouse cite a dead white guy, "The President of the United States is impeachable at any time during his continuance in office." "Wrote James Madison in The Federalist Papers, Number 39."  Of, course, there's always Pierre Delecto, so the Democrats can claim bi-partisanship, Romney On Impeachment: “Unity” Requires Accountability "He said he will “do my best as a Senate juror to apply justice as well as I can understand it.”" The NYT whines (via Hot Air) that Republicans Who Voted To Impeach Face Swift Backlash as Sundance reminds us that Arizona Republicans Stand With Trump, Censure Cindy McCain, Jeff Flake and Doug Ducey.

The AP suggests Supporters’ Words May Haunt Trump At Impeachment Trial. Because people won't say anything to dodge Federal charges.

Insty, COEXISTENCE: Coexistence Is the Only Option: Millions of Americans sympathize with the Capitol insurrection. Everyone else must figure out how to live alongside them.


Forget the patronizing language and the use of “seditionist” to refer to Trump supporters, and all the other lefty hysteria. She’s telling The Atlantic’s readers something they won’t hear many other places: You’re stuck with Trump supporters, and you can’t bully them into submission, however much you want to. You have to live with them.

And, you know, even Paul Krugman has noticed that all the sedition talk is bogus. . . .

Althouse again,"We all want to put this awful chapter in our nation’s history behind us. But healing and unity will only come if there is truth and accountability."

Is there truth in those sentences?

Is there truth in Chuck Schumer?  Tyler O'Neil at PJ Media, Pelosi Strains to Pin More Crimes on Donald Trump for the Capitol Riot , “accessory” to “murder.” Beth Baumann at Town Hall, Dems Could Toss Impeachment Aside to Pursue Another Avenue to Keep Trump Out of Office

Section 3 of the 14th Amendment allows Congress to limit an elected official from being considered for office if they have taken part in insurrection or rebellion. Democrats have continually said President Trump encouraged his supporters to attack the Capitol on Jan. 6, something they consider an act of insurrection. At least that's what they claim in their article of impeachment.

Here's what that section says:

No person shall be a Senator or Representative in Congress, or elector of President and Vice President, or hold any office, civil or military, under the United States, or under any State, who, having previously taken an oath, as a member of Congress, or as an officer of the United States, or as a member of any State legislature, or as an executive or judicial officer of any State, to support the Constitution of the United States, shall have engaged in insurrection or rebellion against the same, or given aid or comfort to the enemies thereof. But Congress may by a vote of two-thirds of each House, remove such disability.

A handful of Democrats believe they stand on more solid footing if they pursue this avenue.

Fine, let's start actions against Joe and Kamala for given aid and comfort to the BL insurrection immediately. Smitty at The Other McCain, The Sanhedrin

But what we really need to do that is bigger than Trump, and can mitigate much of the Sanhedrin’s grip, is a Convention of States. Where neither the Tea Parties nor Trump alone could affect the Deep State or the Sanhedrin in any substantive way, the trifecta of Trump, backed by Tea Parties, and driving toward a Convention of States could work. If we demand it and protect it from hijacking.

So that’s the call to action: support the CoS and let’s target our 2037 anniversary of 250 years of American Exceptionalism for a triumphal, re-ratified rebirth. I want power, not wealth redistributed; I want Commies laughed out of office for their nonsensical “multiracial whiteness” garbage; and I want a country where I can dote on some grandchildren with a secure future before them.

From the memory hole, Insty, PUBLISHED THE DAY BEFORE THE ELECTION. HOW LONG UNTIL IT’S MEMORY-HOLED OR STEALTH-EDITED? Will your ballot be safe? Computer experts sound warnings on America’s voting machines. But now, to question the validity of the vote is unAmerican! (TM)

Althouse, Rand Paul versus George Stephanopoulos. A great confrontation, and I do not agree with the title on this video, that Rand Paul "melts down." 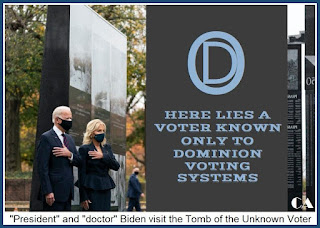 At Da Wire, ‘You Say We’re All Liars’: Rand Paul Has Fiery Debate With George Stephanopoulos
"You’re forgetting who you are as a journalist if you think there's only one side." As if George Stuffinenvelopes has ever really been a journalist. Sundance, Sunday Combat, George Stephanopoulos vs Rand Paul Regarding Election Fraud.
Politico whines (via Hot Air) that State Republicans Push New Voting Restrictions After Trump’s Loss. Good.
Posted by Fritz at 11:07 AM