I see now that whenever a President of the US, and a House of Representatives are controlled by different parties, it is the obligation of the House opposition to attempt to impeach the President. Can we turn the House in 2022? Is it too early to talk about impeaching President Biden for his corrupt actions with Ukraine and China? Not if history is any guide.

As a symbolic gesture, what does this symbolize? The absolute contempt that Democrats have for the 74 million Americans who voted for Trump.

Having discovered that, with the help of mail-in vote fraud and Big Tech censorship, they can steal any election anywhere, Democrats have no fear that the “deplorables” could ever regain power. Thus the totalitarian regime, able to cruse its enemies with impunity, simply does not care about the potential of a backlash — dissent is now treason, and resistance is illegal. No matter how “unlikely” Trump could be removed from office between now and next Wednesday (it’s so unlikely as to be almost impossible, but we cannot rule anything out, in this climate of hysteria), this vote with 10 “Republicans” voting yes, is important for its symbolic value. Glenn Reynolds observes: “They were talking about impeaching him before he was even sworn in, which tells you a lot about the seriousness of this stuff.” Democrats never accepted the results of the 2016 election as legitimate, yet anyone who today questions the outcome of the 2020 election is condemned as an Enemy of Democracy.

The left seems to have a comprehensive scheme to marginalize conservatives, silence our voices, and destroy our lives. We need a battle plan of our own.

This Dinesh D’Souza podcast includes a discussion of the second Trump impeachment project and the lies behind it, what really happened in Washington DC, the banning of free speech on Twitter, Facebook and now Apple taking Parler off their app.

TNP, BREAKING: Full Trump Video Statement Urges Calm, Unity, sundance has the vid at A Video Message From President Donald Trump. I saw it live. It was very noninflammatory, and didn't even mention impeachment. A reminder from the AP on Jan 21, 2017, Fires, bricks mark daylong assault on inaugural festivities. Note the Anti-fa graffiti on the burning limo at right.

Former Republican, Capt. Ed at Hot Air, Breaking: McConnell Shoots Down Emergency Session For Impeachment Trial,, Henry Rodgers at Da Caller, McConnell Confirms The Senate Won’t Hold Trump’s Impeachment Trial Before Biden’s Inauguration. Effectively putting it off to the next Senate, at which point he will no longer be Majority leader, and will just be a turtle in the jury, not The Murder Turtle. And he's holding out on how he intends to vote. Capt. Ed, Axios: “Better Than 50-50” McConnell Votes To Remove Trump — If It Gets That Far, and More McConnell: I Must Mull Over The Legal Arguments Before I Decide On Impeachment.  Ace, Claim: Mitch McConnel "50/50" on Voting to Remove Trump from Office; If McConnell Votes to Remove, Trump Will Likely Be Removed.

But can that happen if Trump is no longer in office? Via the Wombat's In The Mailbox: 01.13.21 Legal Insurrection  No, The Senate Cannot Convict Trump After He Leaves Office. The text:

The Senate shall have the sole Power to try all Impeachments. When sitting for that Purpose, they shall be on Oath or Affirmation. When the President of the United States is tried, the Chief Justice shall preside: And no Person shall be convicted without the Concurrence of two-thirds of the Members present. Judgment in Cases of Impeachment shall not extend further than to removal from Office, and disqualification to hold and enjoy any Office of honor, Trust or Profit under the United States; but the Party convicted shall nevertheless be liable and subject to Indictment, Trial, Judgment and Punishment, according to Law.

Note that during this "trial" Trump will not be President. One would think the even CJ Roberts would boot that right away (although he might approve a trial for the purposes of "disqualification to hold and enjoy any Office of honor, Trust or Profit under the United States." 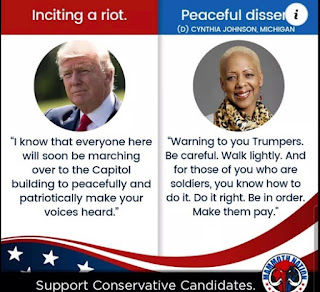 Allah again, McCarthy: Biden Was Fairly Elected, Antifa Didn’t Smash The Capitol, And Trump Bears Some Responsibility. Sundance, Good Grief – Et Tu, Brute? – Kevin McCarthy: “The President Bears Responsibility for Wednesday’s Attack On Congress By Mob Rioters”…. The interesting thing is, that the break in at the Capitol began before Trump stopped speaking. It's pretty hard to argue that he incited them. Sister Toldjah at Red State, Former Prosecutor Reviews 'Incitement' Allegations Against Trump, Says Dems Have Big Problems

After citing DC law on incitement and provocation, which was based on a 1969 Supreme Court case, Shapiro pointed out that Trump’s speech fell short of the requirements under DC law:


The president didn’t mention violence on Wednesday, much less provoke or incite it. He said, “I know that everyone here will soon be marching over to the Capitol building to peacefully and patriotically make your voices heard.”

District law defines a riot as “a public disturbance . . . which by tumultuous and violent conduct or the threat thereof creates grave danger of damage or injury to property or persons.” When Mr. Trump spoke, there was no “public disturbance,” only a rally. The “disturbance” came later at the Capitol by a small minority who entered the perimeter and broke the law. They should be prosecuted.

Another elephant in the room that the Democrats and the media are reluctant to mention is the timeline issue. According to CBS News investigative reporter Catherine Herridge, the first pipe bomb was said to have been found at the RNC around 12:45 as Trump was still giving his speech . . . 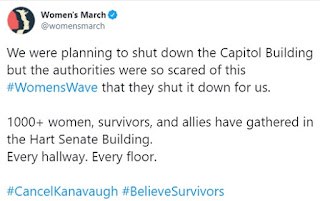 Insty, WERE THOSE PIPEBOMBS MEANT AS DIVERSIONS?

Catherine Herridge, formerly of Fox News and more recently with CBS News, reports investigators think those pipebombs found at the RNC and DNC on January 6 may have been intended to divert law enforcement away from the Capitol itself at a crucial moment. That would also suggest somebody with a command and control structure for the planned riot.

Herridge also notes that the crucial window for understanding the timeline of January 6 events is between 12:45 and 1:15, before President Donald Trump finished his speech to the gathered protestors. If that is true, and there are abundant reasons to think it is, then it’s difficult to ascribe to Trump responsibility for inciting the riot. 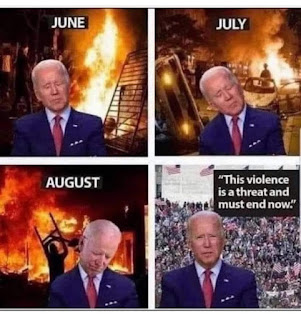 John Solomon at JTN, Rush to judgement? Three crucial questions remain unanswered about Capitol siege "What did Nancy Pelosi know? A prior plot or spontaneous riot? Were there inside facilitators?" Ben Weingarten at Da Fed, Democrats Are Using The Recent Capitol Riot To Consolidate Power. Of course; by any means available.

In the near-term, the Capitol Hill riot has served as a pretext for other corrosive political acts: calls for the 25th Amendment to remove a sitting president, a second impeachment vote; consultations between the speaker of the House and the Pentagon about preventing the president from accessing the nuclear codes and discharging his other duties; and calls by our national security and legal apparatus against conservatives and their speech — all under the pretense of combatting domestic terrorism and punishing “incitement.”

Yahoo! James Comey doesn't think Trump should be prosecuted: 'I'd rather the lights go out'

Allah is incensed that Trump Told Pence Before Certification: You Can Either Be A Patriot Or A P*Ssy. and Karen Townsend at Hot Air, Ted Cruz’s Communication Director Resigns, “Best To Part Ways” Now