The second impeachment is still generating content. From Fox, Tucker Carlson explains Why Democrats wanted to impeach Trump again, and why the GOP went along "Wednesday's impeachment vote had nothing to do with moral outrage, but old-fashioned politics."

But why are Republicans playing along? They don't really have a sound political rationale for any of this, they're just dumb and guilty.

Here's how it works from the perspective of the Republican leadership: It would be best if Donald Trump just went away forever. He's embarrassing. They don't want to talk about him. They'd like him to disappear. So that's their plan with impeachment. Make it so that Trump can never run for office again, not that he actually planned to, and then disgrace Trump so thoroughly that he cannot appear in public ever again, then pretend that Donald Trump never happened.

Call it the suburban Connecticut denial strategy. "Whatever you do, don't talk about mom's alcoholism. Just act like it's not happening and maybe it'll go away."

Politico whines about How Trump Wins Impeachment, Again "He’s spent a lifetime turning near-disasters into brand-building triumphs. Here’s how he could do it once more—unless the Senate breaks the pattern."

Breitbart, Tom Cotton: Senate ‘Lacks Constitutional Authority’ to Proceed with Impeachment After Trump Leaves Office. What does the Constitution have to do with the Democrat's actions? Tyler O'Neil at PJ Media, Tom Cotton Suggests It's Unconstitutional to Impeach Trump After January 20, Insty:

At Power Line, Scott Johnson adds that as a result of Mitch McConnell’s decision and subsequent statement, “no Senate trial will be held and Trump cannot be removed until he has left office. Can the Senate convict and remove him once he has already left office? Former Fourth Circuit Judge Michael Luttig argues in this Washington Post column that a Senate trial would be unconstitutional.” Others disagree, as the ABA Journal notes. In any case, “What a wonderful way to kick off the Harris/Biden administration,” Johnson deadpans.

Of course, the NYT begs to differ, Why Trump Can Be Convicted Even as an Ex-President. I have this notion that, assuming the 'Pubs take the House and Senate in 2022 (a big assumption), they should immediately begin impeachment proceedings based on Biden's blatant corruption with China and Ukraine, and then, make him ineligible to hold the presidency. The worst problem with that is Kamala.

From Alex Nitzberg at JTN,  Sen. Graham says Biden should oppose 'post-presidential impeachment' of Trump. I still say Trump should pardon Hunter Biden for everything, but not Joe. And from Carrie Sheffield at JTN, Trump reportedly furious about second impeachment vote, but believes move will backfire on Dems. For an amateur, Trump has pretty sharp political instincts; as a performer, he understands his audience. At Da Week, Matthew Walther says Impeachment season is just beginning

As far as I can tell the only practical consequence of Trump's impeachment will be normalizing what was once an extraordinary procedure meant to get around the problem of having a head of state from whom all federal legal authority flows at the head of a partisan government. The campaign to impeach Trump began before his inauguration and continued even after it had been completed. In the future, presidents will regard the most extraordinary censure our federal government can deliver as a partisan slap on the wrist, like being held in contempt of Congress after refusing to cooperate with an absurd subpoena.

And as if to prove him right, GOP Congresswoman: 'I Will Be Filing Articles of Impeachment Against Joe Biden' on January 21 (Matt Margolis, PJ Media).
And to prove that humor is not dead in politics, Journalists falsely accuse Louie Gohmert of calling for more 'uprisings' after he quotes Pelosi (Fox). " 'I just don't even know why there aren't more- why there aren't uprisings all over the country and maybe there will be,'"  Not the Bee, This is so beautiful: Libs are freaking out because of what GOP Rep. Gohmert said on the House floor ... But he was quoting Nancy Pelosi verbatim 😂💀. He ain't as dumb as he acts on TV.
And speaking of incitement to violins, At Insty, TRUMP’S SPEECH WAS NOT INCITEMENT TO IMMINENT LAWLESS ACTION.

Not if words and precedent have any meaning. You don’t need to be a lawyer to figure this out – read it for yourself. The entire media and political apparatus (apparently including the interim dean of Cornell Law School) is determined to gaslight you into believing it was. But you are not the crazy one.

And, as a lawyer, I really hate to say this, but it’s now wildly apparent you can’t trust our legal system on anything even remotely political either. Don’t expect sanity from that quarter.

Matt Margolis again,  Did CNN Accidentally Prove That Trump Did NOT Call for Violence at the Capitol? The only way for CNN to tell the truth would be by accident. NewsMax, Sens. Graham, Johnson Call for Independent Commission to Probe Capitol Riot. I'm sure it will be as well regarded as the Warren Commission.

John Sullivan “faces federal charges of civil disorder, entering a restricted building and violent entry or disorderly conduct…As protesters climbed over a wall near the Capitol entrance, he allegedly exclaimed in the video, ‘You guys are f—— savage. Let’s go!’ ‘There are so many people,’ Sullivan’s voice can be heard saying as the camera shows a large group of people making its way toward the building. ‘Let’s go. This s— is ours! F– yeah. I can’t believe this is reality.’ ‘We accomplished this s—,’ he said at another point ‘We did this together. F— yeah! We are all a part of this history…’ While he has denied ties to Antifa in recent interviews, his group Insurgence USA had advertised an event called ‘Kick These Fascists out of DC’ on Wednesday around the same time as a pro-Trump rally near the National Mall that preceded the Capitol chaos.”

“After the rioting, Sullivan was invited onto CNN to discuss what he witnessed at the U.S. Capitol,” the Blaze adds.

Of course he's a CNN contributor. Which doesn't let right wing violent protesters off the hook:

However, Curtis Houck of NewsBusters tweets, “Guys, just because the BLM/Antifa guy has been charged doesn’t mean that they planned this and it was a false flag. Sorry to be the bearer of bad news, but facts don’t care about your feelings.”

And as Dan McLaughlin wrote a week ago: It Doesn’t Matter if a Few of Them Were Antifa. “But the hunt to find a few false-flaggers in a mob of the most deplorable segment of Trump supporters is a red herring. Even if some of them were there, it does not change what happened, or why. And if you’re trying to sell the theory that left-wingers were a driving force in all this, you better have hard evidence for that, because you are swimming against the tide of simple common sense, basic human experience, and what we can see with our own eyes.”

UPDATE: On the other hand, “Maybe this is why you don’t do one-day show trials masquerading as impeachment,” GOP spokeswoman Liz Harrington tweets.

With absolutely ZERO evidence to back up the assertion, CBS Evening News spent part of Wednesday’s newscast giving oxygen to a conspiracy theory spawned from a Democratic congresswoman, claiming Republican members of Congress were in league with the insurrectionists and intentionally gave them “reconnaissance” assistance. The network even brought on a former U.S. attorney to call them Benedict Arnolds.

“Was it an inside job? New allegations that some members of Congress gave tours to rioters who stormed the Capitol,” anchor Norah O’Donnell loudly proclaimed during the opening tease, teeing up the fact-free report from chief Justice correspondent Jeff Pegues.

When it was his turn to smear Republicans with the unsubstantiated allegations, Pegues touted how New Jersey “Democrat Mikie Sherrill, a combat veteran, accused some of her congressional colleagues of working with the demonstrators.”

Stacy McCain, The Media’s Gaslighting Intensifies: Trump Voters Are ‘Terrorists’?  Meanwhile the WaPoo has decided to make "Q"  the newest Immanuel Goldstein, QAnon reshaped Trump’s party and radicalized believers. The Capitol siege may just be the start. Does anyone actually know any believers in QAnon? Although, given John Weaver,  Ed Buck, Anthony Weiner, Jeffrey Epstein and Weinstein and others, the idea that the US is run by a bunch of pedophiles is looking better and better.

AllahPundit hopes Did Hawley Wreck His Career With His Certification Stunt? while at NewsMax, Sen. Josh Hawley Defends Electoral Objection in Op-ed.

This ain't hell, I thought there was no evidence of voter fraud? But we were assured there is no such thing as voter fraud, Woman Charged with Operating Massive Ballot Harvesting Scheme in Texas, only because she was outed by Project Veritas. Now do Pennsylvania, Georgia and Michigan. 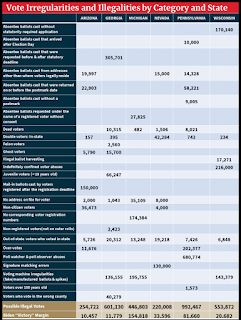 Geller, The Case for Voter Fraud in Georgia: The Evidence is Overwhelming but NPR is trying to whitewash it After Attacks On Election Integrity, Georgia Officials Work To Rebuild Confidence