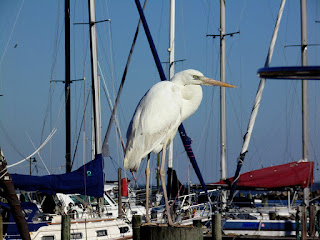 Skye and I had just walked down the steps to the dock at the harbor when we heard the furious flapping as Whitey, the apparently still resident Great White Heron, got off the dock and onto a nearby piling. 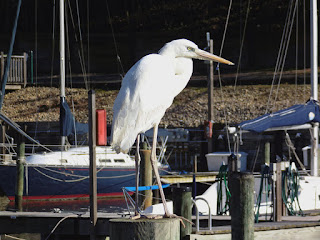 As we moved past that piling, he moved again, out to one at the end of the slip. Later, as we were walking down the pier toward the beach, he flew down the center of the harbor and out, and made a southward turn, confirming my suspicions that's one of the places he goes when we don't see him around. 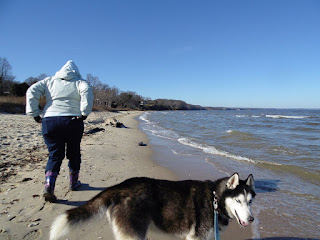 After a couple of cold, overcast drizzly days, the sun was welcome. It was about 40, with a bit of north breeze. 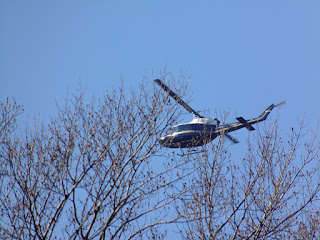 This certainly looks like the same USAF helicopter that we see occasionally run down the  beach in summer. And here, I thought they were coming for the bikinis. 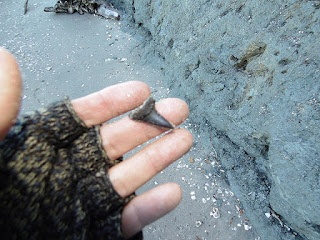 The first decent White Shark (Carcharodon hastalis) tooth of the year. Unfortunately the camera decided to focus on the sand and cliff instead, twice. Trust me, it's a nice specimen, sharp enough to be fresh out of the sharks mouth. It will occupy a spot on the kitchen window shelf until being displaced by a larger specimen. Otherwise, a terrible day for fossils, with only 3 total teeth. 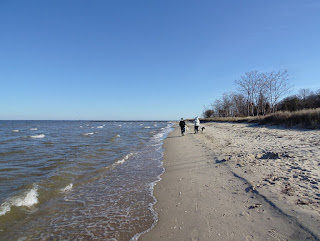 Georgia and Skye walk with Cindy, one of the regular beach walkers from the neighborhood. Cindy is Skye's fave, since she carries dog treats, and doles them out liberally
Posted by Fritz at 3:11 PM