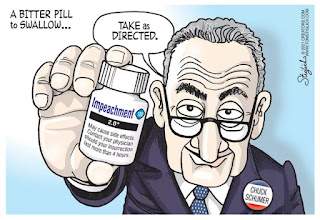 At the Spec.US, Roger Kimball writes Impeachment 2.0 is another silly sham, "Sen. Rand Paul is right". I'd like to read it, but it's paywalled and I've used all my free views this month, and I don't want to read it that bad. Michael Goodwin at the NYPo says it for "free", Impeaching Trump gets more divisive by the minute: Goodwin.


Fox, Senators mull censuring Trump as an alternative to impeachment trial, Jeff Charles at Red State, Democratic Senators Recognizing Impeachment Is a Fairy Tale Seek Other Options "It appears they are willing to settle for Diet Impeachment™ rather than the real thing." And the idea is starting to grow on AllahPundit at Hot Air, Actually, A Censure Resolution For Trump In Addition To Impeachment Isn’t A Bad Idea. A stupid and futile gesture that has absolutely no effect.

Breitbart, Jen Psaki: Biden Can Reach ‘Unity’ with Trump Supporters Even with Impeachment Trial. Fuck you and horse you rode in on. AllahPundit like Pierre Delecto, Romney: Don’t Talk To Me About Impeachment Being Divisive If You Won’t Say That Biden Was Fairly Elected. Him too. Althouse parses Pierre closely in "You know what, I was a big Trump supporter, I was really pulling for Donald Trump, but he lost fair and square." "Said... Mitt Romney." Looking carefully, he was attempting to put words in our mouths, not expressing his own opinion on Trump, whom he clearly hates for spiking the ball after he was elected and Romney wasn't.

I'm not seeing the whole transcript, but to really lean into the demonstration of honesty, Romney should acknowledge the dismissals that were for a lack of standing. I'd like to see him engage with what Rand Paul said last Sunday:


Most of the cases were thrown out for lack of standing, which is a procedural way of not actually hearing the question. There were several states in which the law was changed by the secretary of state and not the state legislature. To me, those are clearly unconstitutional and I think there’s still a chance that those actually do finally work their way up to the Supreme Court. Courts traditionally and historically don’t like to hear election questions.

I agree that the time for contesting the election has passed, but I don't think the way Romney is speaking will convince Trump supporters to give up their belief that something went wrong. Telling them the courts found it laughable, and they should give up and move on is going to make true believers more suspicious. And I'm sure they don't buy the assertion that Romney was ever "a big Trump supporter."

Sarah Longwell at the Peacock thinks GOP senators at Trump's impeachment trial are dooming the party. They need to repudiate him. She's entitled to he opinion, but I think she's wrong. Ace, Shock Poll: A New "Patriot Party" Would Become the Second Largest Political Party in the USA, Dropping the GOP to an Also-Ran Third Place

Is this really a shock, though?  . . . The trouble is, of course, that Democrats would trounce either party. But that would be a short-time problem, as people would naturally realign to support the party in the best position to beat the Democrats.

But yeah, there will be some short-term pain.

DOJ – […] Mackey allegedly tweeted an image that featured an African American woman standing in front of an “African Americans for [Hillary]” sign. The image included the following text: “Avoid the Line. Vote from Home. Text ‘[Hillary]’ to 59925[.] Vote for [Hillary] and be a part of history.” The fine print at the bottom of the image stated: “Must be 18 or older to vote. One vote per person. Must be a legal citizen of the United States. Voting by text not available in Guam, Puerto Rico, Alaska or Hawaii. Paid for by [Hillary] for President 2016.” The tweet included the typed hashtags “#Go [Hillary]” and another slogan frequently used by the Candidate.

More than 4,900 people, encouraged by the misinformation campaign, cast their vote via text, officials said.

Normally, it might be tough to prove sedition. It still might prove difficult in some of these cases. Prosecutors would have to demonstrate that each person individually had a specific intent to stop Congress from conducting the business necessary to transition to a new administration for the purpose of illegitimately imposing their own choice of leader. For many if not most of these defendants, they could argue that they were only there for a legitimate protest and got caught up with a mob that sucked them into the Capitol, but that they had no seditious intent.

How do you prove the mens rea for sedition in those cases? Likely, prosecutors will need to do little more than subpoena the social-media accounts for these defendants, if they have not already done so.

And this from YaHoo!  Proud Boys leader Enrique Tarrio was an FBI informant. I wonder how many undercover FBI informers or agents were involved in the Capitol incursion?