I watched it unfold on TV yesterday in disbelief too. Stacy McCain, WTF Just Happened in D.C.?

So, I was up late last night for the Georgia runoff election, then got up at 5:30 a.m. to write up the final result, after which I had some deadline project work to do until about noon. My grandchildren came over about 1 p.m. I had kind of noticed on Twitter some stuff about pro-Trump protesters breaching a security perimeter at the Capitol. But, OK, a few rowdy people got a little out of control, I figured. No big deal. And I was tired, so I decided to take a nap. My wife woke me up about 4 o’clock: “Did you see what’s happening?” Wow. Guess nap time is over:


Disturbing video captures the moment a woman was shot in the chest inside the US Capitol Building on Wednesday, as President Trump supporters intent on disrupting the certification of the presidential election stormed in.
The 30-second clip posted to Twitter captures the sound of a single gunshot, then shows the unidentified woman lying on the floor.
Blood poured from the mouth of the motionless woman, who was draped in red, white and blue, the video shows.
Fellow protesters can be seen tending to the woman, who was later seen being carried out of the building on a stretcher.
CNN reported that the woman was in critical condition.

I’m confused about what happened and why. Was she shot by police? What did she do? Did someone else have a gun?


Theory: My third cup of coffee was spiked with a small dose of LSD.

Except (a) I had four cups of coffee before 10 a.m. this morning, and (b) I am convinced that the acid dose was rather large.

It is reported that the woman shot has died, and that she was an Air Force veteran of 14 years. Stacy also has this:

BREAKING: Former FBI agent on the ground at U.S. Capitol just texted me and confirmed that at least 1 "bus load" of Antifa thugs infiltrated peaceful Trump demonstrators as part of a false Trump flag ops

I can easily imagine that, and there appears to be some independent media that supports that. SMIB risks face book jail by posting: 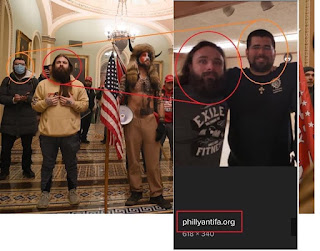 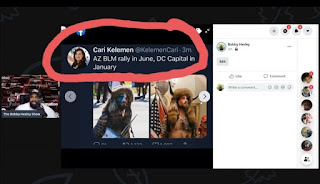 Facebook claims these people are Q-Anon. You trust Mark Zuckerberg, don't you? Althouse:

I didn't support animal skin guy, but he is our new leader and we should give him a chance to grow in office https://t.co/Ci4SDaXJBi

It shouldn't be hard to figure out who he really is. Let just say we remember who committed and who encouraged the violence all summer long. 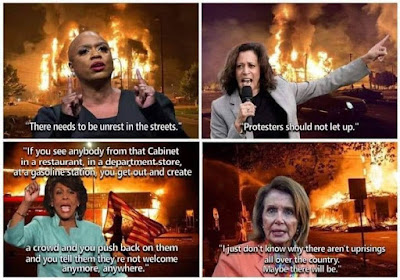 
Two groups of people (call them A and B) both see themselves as victims and have grievances they feel aren’t being heard.

Both resort to violence.

Dem reactions to group A:
“People will do what they do”
“Tell me where it says protests have to be peaceful”
“Don’t judge a whole group by the actions of a few”
“America is racist”

Dem reactions to group B:
“They are traitors”
“Violence is never acceptable”
“Arrest any people who agree with them in Congress”

And via the Wombat's In The Mailbox: 01.06.21, Weasel Zippers: Fox News Vote Totals Last Night Went Up, Down, Upside Down All Night,

Votes should only count up and never count down, unless a major error is detected and fixed. As I understand it, the networks get their vote feeds direct from the state government, without human intervention, so whatever is happening is happening at the state level. I suppose there could be reason for this, but I'd sure like to know what it is and see it fixed.
And lastly from Althouse: "While this represents the end of the greatest first term in presidential history, it’s only the beginning..."

...fight to ensure that only legal votes were counted. While this represents the end of the greatest first term in presidential history, it’s only the beginning of our fight to Make America Great Again!”

That's Trump's statement, which, as the NYT puts is, "had to be issued through surrogates since Mr. Trump’s Twitter account was suspended." It "came moments after Vice President Mike Pence affirmed Mr. Biden as the winner of the presidential election shortly before 4 a.m. after the final electoral votes were tallied in a joint session of Congress."
Posted by Fritz at 9:46 AM