It took her a few extra days to find her teeth, but at last, House Speaker Pelosi to send impeachment article to Senate on Monday, (JTN) and after trying to figure out what the best time to throw this political turd was, upChuck Schumer and Murder Turtle McConnell settled on a date. First, from Sundance at CTH,  Speaker Pelosi Will Send Trump Impeachment Article to Senate on Monday, Senate Trial Likely Next Week then Chuck Schumer Outlines Impeachment Schedule – Senate Trial Scheduled February 8, 2021, presumably to give Joe Biden a few days before the shit starts flying. Fox, Trump impeachment trial delayed until week of Feb. 8, Schumer says.  Ex-Republican Capt. Ed at Hot Air, Senate Republicans: Votes To Convict Trump Are Few — And Dwindling Ace, Noted Anti-Authoritarian Nancy Pelosi Calls for (Supposedly) Defeated Political Rival to be Prosecuted for Murder Smell the healing.

Don Surber, The impeachment is about legitimizing Biden

But this impeachment is not about Donald Trump.

This impeachment is about Biden, just like the last one was.

That first impeachment was to help coverup Biden's crime of withholding a billion dollars in aid for Ukraine unless they stopped prosecution of a company that paid his son a million bucks a year for a no-show job.

This impeachment is an attempt to legitimize the stolen election of Biden.

Hey, Barrett has 7 kids. She's not going to put their lives at risk just because someone wants to stop the biggest heist in American history.

Biden was installed as president, not elected.

A moment of amusement in the impeachment process as  Chuck Schumer says Senators must decide whether Trump incited 'erection' (PM). Hey it could happen to any old Dick (Tom or Harry).

Liz Cheney is probably not amused as Liz Cheney’s problems pile up "Trump’s allies in the House are moving quickly to try to oust her from GOP leadership."(Politico). Ace,  Neocon Viperess Liz Cheney Fights For Her Political Life "And I laugh, and laugh, and laugh." AllahPundit whines that Some House Republicans Threaten To Boycott Meetings If Liz Cheney Remains As Conference Chair while Mark Davis at Town Hall says It's This Simple: Liz Cheney Must Go

They really love the troops, too, National Guard Kicked Out Of The Capitol, Forced To Sleep In A Parking Garage (John Sexton, Hot Air), where Covid-19 Contracted by Scores of National Guard Members in Washington (WSJ). Politico, ‘Packed us together like sardines’: Guard deployed to Capitol struggles to contain Covid. Sundance, Tools For The New Regime – Troops Used as Narrative Props in DC Sent to Sleep in Parking Garage by Lawmakers, but, via the Wombat's In The Mailbox: 01.22.21, as Nice Deb at Am Great reports, Trump Offers to Let National Guard Stay at the Trump Hotel D.C. After Parking Garage Outrage

Former President Trump has reportedly offered to let the National Guardsmen still stationed at the Capitol stay at his Trump Hotel in Washington D.C.

“Trump has given permission for the troops to stay at Trump Hotel DC if any of them need, an advisor told the One America News Network.

Now, people arrested at the Capitol incursion are getting the message that if they want off the hook, all they need to do is blame Trump. Yahoo! Lawyer for the 22-year-old accused of stealing Pelosi's laptop blamed Trump for the Capitol riot, saying her client 'took the president's bait' Capitol rioters express regret for participating in unrest after not getting a pardon from former President Trump ""He regrets very very much having...just been duped by the president," said Al Watkins, attorney for Jacob Chansley also known as the 'Qanon Shaman'" Twitchy, AOC warned them: FBI now reportedly interviewing people whose cell phones were *near* the Capitol on Jan. 6 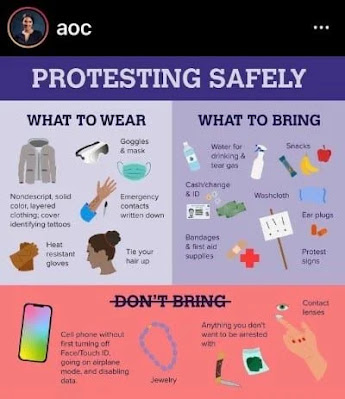 AOC advises heat resistant glove?  For throwing Molotov cocktails, I presume.Incite riots much? This would be amusing, but I know of one couple, nearly my age, who went to the rally and watched from across the street as the event unfolded on Jan. 6. I supposed the FBI will be checking in on them, and their name will go on 'the list' that the Biden administration is compiling.

A reminder from Ken Cuccinelli: Nancy Pelosi Had a Disturbing Request for What She Wanted the National Guard to Do. Machine gun nests. Ace, Glenn Greenwald: Where Was the National White Power Uprising On Inauguration Day That the Leftist-Military Complex Panicked People Into Fearing? Yes, where was that?  Hey dude, where's my insurrection? Da Beast tells us Dem’s New Bill Aims to Bar QAnon Followers From Security Clearances. Sure, all three of them, now throw in Antifa and socialists and we have a deal.