As promised, Nancy Pelosi and her band of merry pranksters delivered the second bill of impeachment to the Senate yesterday. NYPo, Trump article of impeachment over Capitol riot sent to Senate, Sundance at CTH, House Delivers Article of Impeachment, Trump Warns GOP of Primary Consequences. Mess with him, and you'll get a primary challenge. Seems fair to me. AllahPundit at Hot Air crows Pelosi, House Dems Deliver Article Of Impeachment To Senate

And in an interesting wrinkle that makes it even less likely to be a fair trial, Sen. Leahy, not Justice Roberts, to preside over impeachment trial (Da Hill). It's not entirely clear if Roberts said no because Trump was not longer President (and the constitution requires the CJ to preside over the impeachment trial of a sitting President), or if Schumer figured that out on his own. At NR Britanny Berstein writes, Sen. Leahy Expected to Preside over Senate Impeachment Trial, Not Chief Justice Roberts  Allah Pundit at Hot Air whines (he does a lot of whining) Roberts Bails Out Of Impeachment Trial, Leaving Dem Sen. Pat Leahy To Preside Instead; Update: Unprecedented, Says Cornyn. Will he vote in the jury (Senate) too. Will he also be a prosecutor? Althouse wonders Did Chief Justice John Roberts decline to preside over the Senate trial of the Trump impeachment? "I'm trying to understand "John Roberts ducks the spotlight by skipping the second Trump impeachment trial" by Joan Biskupic (CNN). Also "If the Chief Justice is required, then what Leahy is about to do is not a duty. Taking on a role that is not yours under the Constitution is an abuse of power." 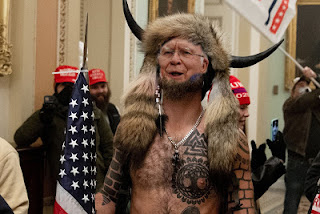 I wrote, in my post yesterday, "Did Chief Justice John Roberts decline to preside over the Senate trial of the Trump impeachment?"

In the comments, Meade wrote: "Will Leahy be costumed in his horned animal skin shaman outfit?"

I said, "Can someone do a photoshop of this? I'd like to put it on the front page."

Breitbart, Growing Number of GOP Senators Oppose Impeachment Trial. David Catron at  Am Spec predicts Trump Impeachment DOA in Senate "He will be neither convicted nor barred from holding public office. RCP, Democrat Prospects of Convicting Trump in Senate Fade Away. Which inspires this musical intermission:

Nice! Anyway, Byron York at WaEx writes of  The coming argument over whether Trump can be tried. From Da Hill, Rand Paul says Boycott the sham impeachment. Stacy Lennox at PJ Media (VIP), If You Thought the First Impeachment Was a Circus, Just Wait for Impeachment 2.0. Daniel Greenfield at Front Page wants to Impeach Obama for Inciting Black Lives Matter Riots. Well sure, but better, get Kamala Harris, and have her named as ineligible for the Presidency.
At the AtSlantic, The Trial Will Test Whether Senate Republicans Care Even About Themselves, and of course, the Democrats can always count on Pierre Delecto, Mitt Romney on board with post-departure impeachment trial of Trump, from Herr Professor Jacobsen at LI. Sundance announces Matt Gaetz Campaigns In Wyoming to Oust Liz Cheney From Republican Leadership over he pro-impeachment vote.
Hawley calls for ethics investigation into Dems who filed complaint against him. Fair is fair. Congratulations on his being able to ‘Bamboozle.’ his teachers at liberal teachers at Yale. Hawley mentors stunned by conduct, but early warning signs were there
On the occupation of Washington D.C. by federal troops, Chris Roach at Am Great calls it  Security Theater Redux "Far from being an exceptional response to an emergency, the sterile and militarized Washington, D.C. of Joe Biden’s inauguration was an effort at mass intimidation and a portent of things to come." At Am Think, Monica Showalter wonders Who ordered the National Guard troops stuffed into the icy underground parking garage?

Whatever happened, it sounds like the doings of the Democrats, who used the Guard and then tried to bury them underground, out of sight, out of mind.  That sets a mighty interesting tone for the incoming Biden administration.  It might just be the first thing it's remembered for.

PM, Tulsi to Biden: 'let our troops get back home'

Ilana Mercer at Am Great, A Hardcore Libertarian Take on the Storming of the Capitol Building "Our country is not to be equated with our Capitol." Sundance reports Founder of #WalkAway Movement, Brandon Straka, Arrested For Participation in Capitol Hill Riot, and notes that as far as they know, he did not enter the Capitol itself, but encouraged others to do so. Should be an interesting trial.

FBI Special Agent Jeremy Desor said that videos revealed that during the melee, Straka was part of a crowd pushing toward a Capitol doorway. Desor doesn’t contend that Straka went into the building, but says that as others tried to charge through the entrance, the activist shouted: “Go! Go!”

Desor said that as a Capitol police officer tried to make his way through the crowd with a riot shield over his head, Straka urged others to wrestle it from him. “Take it away from him,” Straka allegedly yelled. “Take it! Take it!” (read more)

NYT accidentally provides more evidence that Trump did not incited the rioters,  Son Tipped Off F.B.I. About His Father, Who Is Charged in Capitol Riot “I put my emotions behind me to do what I thought was right,” said Jackson Reffitt, who weeks before the siege alerted the F.B.I. that his father was planning “something big.” Disown the ungrateful wretch. But ABC holds to the narrative, ABC: U.S. Like Post-War Germany, Antifa and BLM Violence Is Morally Right (Newsbusters).

Yeah, you really cannot make this stuff up. After the DOJ, FBI, CIA and US Intelligence Apparatus writ large, went to extraordinary lengths to influence both the 2016 presidential election (Yates/Comey) against Donald Trump; and the 2018 mid-term election (Rosenstein/Mueller) against President Trump; with no accountability despite the overwhelming evidence…. Now the DOJ Office of Inspector General wants to investigate political pressure on the 2020 election.

Ex-Republican Capt. Ed at Hot Air, Here We Go: New Horowitz Probe Launched Over Allegations Justice Officials Tried To Overturn Election. Paul Mirengoff at Power Line, A DOJ coup attempt? No, an honest disagreement about the election.
At the American Mind, Setting the Record Straight on the POTUS “Ask "Vice President Pence was not asked to reject electoral votes."
Anxious reports Dominion files $1.3 billion defamation lawsuit against Rudy Giuliani, and Giuliani On Dominion Lawsuit: Yay! Now I Can Really Investigate Them! (Capt. Ed).
Ace, Remember: Abusing IRS Laws Regarding Non-Partisan Charities, Mark Zuckerberg Poured $350 Million Into Effort to Turn Out the (Extremely Democrat) Urban Vote "Strange that Mark Zuckerberg wasn't interested in promoting voting everywhere. Just in Democrat-controlled precincts." Remember, they got Al Capone on tax laws. WaT, Democrats question election results: 'We just trust the machines, and we shouldn't' "Discontent runs through a broad swath of voters from across the political spectrum." Jay Valentine at Am Think, You Know There Was Industrial-Scale Election Fraud. What Can Be Done?

In December, my team was contacted by some data geeks with official election data from one of the swing states. It was a set of about 4 million records, mail-in and absentee ballots with all the supporting data. They asked if we could do anything with it.

We are not election guys, and we have day jobs doing pretty cutting-edge stuff in technology, but we do love to play with data. The bigger, the more complicated, the better.

We built a spreadsheet with about 4 million rows, one for each of the ballots. We saw a video some teenager did counting how many ballots were received before they were mailed out. That's not a typo.

The U.S. Postal Service, which still finds letters from World War II in its system and piles of mail under bridges, delivered the ballots back to the state officials before they were mailed. As tech guys, we did think this might be a new, disruptive technology, and we are still trying to recreate it.

So we ran the test on the data we were given.

Guess what! About 30,000 — more, I recall — ballots were received before they were sent. A bunch more, in the thousands, were sent and received the same day. You get the picture.

O.K., big deal. We took an analysis some kid performed, and we did it, too, but with the most cutting-edge software out there, one that could create a 4-million-row spreadsheet that responded in less than a second.

Right. Our analysis was not the eureka moment.

The eureka moment was when we created the SIMPLE BUTTON. We created a button that said "ballots received before being mailed." It is just a button on the screen!

Some of our team, who may not even vote and certainly do not care a bit about election fraud, were amazed at how much fraud they experienced — by seeing it in live data. They touched the hot stove!

So we built a couple of more queries. Ballots sent and received in 24 hours, 48 hours!

The effect was the same to everyone we let hit the SIMPLE BUTTON — everyone was blown away.

There are a lot of publicly available data out there, and there are many, too many for us to track down, excellent analyses of those data. It is evidence but not proof.

Josh Hawley at NYPo,  Sen. Hawley: It’s time to stand up against the muzzling of America. Yep. Jim Treacher at PJ Media, House GOP: If the FBI Is Investigating Parler for the Capitol Riot, Let's Include Facebook and Twitter. Double yep.

Ex-Republican, Capt. Ed, As Expected, And Invited: Dems Make First Steps To Federalize Elections. I think it's unconstitutional, but when has that stopped the Democrats.