So far, Biden has refused to halt a divisive impeachment, questioned the loyalty of the troops, sparked an immigration crisis, and surrender to China via energy policy. He hasn’t even started yet. 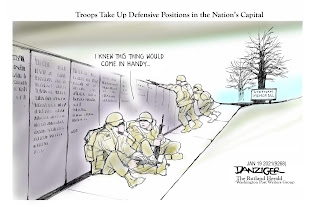 Texas Gov. Abbott On Sending National Guard To D.C.: “I’ll Never Do It Again If They Are Disrespected Like This.” (Karen Townsend at Hot Air). TNP, ‘No Plot Against Biden Found’ – 2 National Guardsmen Removed From Duty In DC After Social Media Spying. So they could only find two that did not pass SPLC guidelines? That's not nearly enough. Ace, Tucker Carlson's Must-Watch Opener About the Occupied Capital, and the Left's Increasingly Violent Rhetoric Leah Barkoukis at Town Hall, Carlson Explains What Message Dems Are Sending with the Militarization of DC. Welcome to the Hunger Games.

Thus, it’s not about safety, he argued.

“Instead, unmistakably, the Democratic Party is using those troops to send the rest of us a message about power: ‘We're in charge now. We run this nation, from Honolulu to our colony in the Caribbean and everywhere in between, very much including where you and your family live. Do not question us men with guns. We control the Pentagon.’ And indeed, they do,” he said. 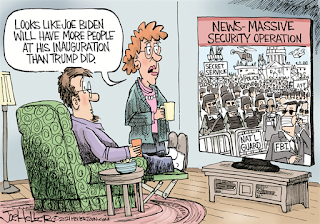 As @ScottAdamsSays noted this morning, once you start evaluating soldiers for political loyalty, you are on your way to creating something like a Revolutionary Guard that protects one party or leader. Democrats are becoming what they think Trump is.

Roger Kimball at Am Great, Calls the Democrats  A Party of Faction and Fantasy

The ostensible reason for turning the capital of the United States into an armed camp is to protect the mostly virtual inauguration of China’s Big Guy, Joe Biden, against the onslaught of all those “right-wing extremists,” “white supremacists,” etc. that the magical magus Donald Trump is mobilizing through secret “dog whistles” and other shamanistic practices.

The trouble is, all those “right-wing extremists,” like President Trump’s supposed “incitement” of the crowd at his “Save America” rally on January 6, are a figment of Nancy Pelosi and Chuck Schumer’s addled imaginations. Yes, that meme is assiduously, not to say preposterously, circulated and amplified by the media, social and anti-social alike. But those threatening hordes do not exist.

Yahoo! Spooked Residents Fear Backyard MAGA Mobs at Inauguration. On the beach yesterday we spoke to a friend who is a professor at GW and has a beach house here. She can't go home because she's not allowed to park on her street.

"I brought my family to the Capitol on January 2nd for a tour and on the 3rd for pictures to commemorate the day I was sworn in as a Member of the U.S. Congress. Again, the only people I have ever had in the Capitol with me during the 117th Congress are my young children, husband, mom, aunt and uncle," she said.

Stephen Green, Insanity Wrap #128: NBC News Hack Says MAGA Terrorists More Dangerous Than al Qaeda. Heads roll. . . Atlantic hack claims The Capitol Rioters Are Giving Insurrection a Bad Name "Civil society cannot allow mistrust in institutions to become violent rebellion." Not like BLM rioters, huh? There never was an "insurrection", just a demonstration gone wrong, although there were some malevolent actors who took advantage. NYT, Investigators Eye Right-Wing Militias at Capitol Riot "The F.B.I. has arrested several members associated with violent right-wing extremist groups known as the Oath Keepers and the Three Percenters. John Sexton at Hot Air, Court Documents Reveal A Group Of Militia Members Planned Their Entry To The U.S. Capitol, which means that Trump couldn't have incited them, since they were planning it before the rally. However, the rally did provided cover, which is why AllahPundit is crowing Barr: Questioning The Outcome Of The Election “Precipitated” The Riot At The Capitol and Mitch McConnell Blames President Trump, Says Mob “Was Provoked By The President”. The rally was totally unnecessary.

This may suggest the Democrats are mulling a new War on Terror — against domestic enemies. Both Clinton and Pelosi also returned to the Trump-Russia collusion conspiracy theory, suggesting Russian President Vladimir Putin played a role in the Capitol riot. 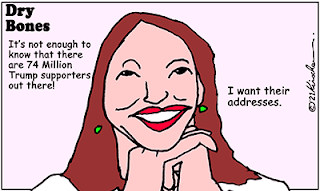 Ace notes Scumbag David French -- Who Was a Desk Jockey on a Short Term in Iraq -- Uses His "Iraq Service" as His Bona Fides for Suggesting a Counterinsurgency Campaign to Separate Trump Supporters from the General Population while Jim Geraghty at NR writes QAnon Conspiracy Theories Can't Be Ignored, while Jim Treacher finds Ali Velshi Doesn't Condone Rioting (Unless It Gets Him What He Wants), but then, I have never heard of Ali Veslshi before. Oh yeah, he's the MSNBC guy who stood in front of a burning building in Minneapolis and called it a "mostly peaceful protest". Ace, Twitter Permits Video Calling for Liberals to "Fight Back" Against Trump Supporters to Go Viral.  But then a slight glimmer of hope via Insty, I HAVE TO ADMIT, I WASN’T EXPECTING THIS Raishida Tlaib tweet:

I’m leading the call for national security powers to not be expanded in light of the attack on our nation’s Capitol that occurred two weeks ago, as such measures often lead to the erosion of Americans’ civil liberties.

On the other hand, she whines,  Trump won't be convicted by Senate because of white privilege, (PM) which brings us to impeachment follies. Brianna Kraemer at JTN reports Near-majority believe impeachment trial after Trump leaves office is 'unnecessary' "Opinion is split along partisan lines." Of course, isn't nearly everything? Mike Brest at WaEx, Wyoming GOP chairman floats secession after Cheney votes to impeach Trump, AllahPundit whines  More Than Half Of House Republicans Sign Petition To Replace Liz Cheney As Conference Chair. Elections have consequences, and so do votes. WaT, Liz Cheney censured in Wyoming for vote to impeach Trump: 'Did not represent our voice'.

I was Chief Prosecutor at Guantanamo for over 2 years and there’s far more evidence of Congressman Madison Cawthorn’s guilt than there was of guilt for 95+ percent of the detainees. It’s time we start a domestic war on sedition by American terrorists.

In his letter of the morning of January 6, Vice President Mike Pence asserted that “[s]ome believe that as Vice President, [he] should be able to accept or reject votes unilaterally.” He repeated the claim later in the letter: “vesting the vice president with unilateral authority to decide presidential election contests would be entirely antithetical to [the] design” of separation of powers and checks and balances given to us by our founders. And then a third time, he wrote: “I do not believe that the Founders of our country intended to invest the vice president with unilateral authority to decide which electoral votes should be counted during the Joint Session of Congress.” And a fourth: “It is my considered judgment that my oath to support and defend the Constitution constrains me from claiming unilateral authority to determine which electoral votes should be counted and which should not.”

With all due respect to the vice president, that is not what the president asked when all was said and done. But before I elaborate on that below, let’s explore just what constitutional authority the vice president has, by way of some hypothetical scenarios. . . .

Jim Bovard at Am Con, Our Mail-In Elective Dictator "The surge in mail-in voting is a sea change for American democracy regardless of whether widespread fraud occurred." Mail-in voting isn't going away. Republicans need to face that, and find a way to control the fraud involved. Hot Air, Sidney Powell Drops Suit To Overturn Georgia Results. I think it's what the lawyerly types call moot. Newsweek, 'Please Sue Me': MyPillow CEO Mike Lindell Welcomes Dominion Lawsuit Over Election Claims. Discovery should prove amusing.