To keep the Washingtonians out of the rest of the country. Do I have to? I'm not feeling it this morning. From MSN, Selfie-Snapping Rioters Leave FBI a Trail of Over 140,000 Images. Real serious insurrection you got there. The New Yorker has  A Reporter’s Footage from Inside the Capitol Siege. I hope she's charged like all the rest.  A reminder from BPR, Hundreds of rioters destroyed property, set fires during Trump’s 2017 inauguration, and all charges were dropped. And then the Federal bureaucracy declared the résistance. But via WaEx Lindsey 1.0 whines Pardoning Capitol rioters would 'destroy' Trump. I don't see it frankly. The Democrats are going to go after him with any tool they have anyway. To wit, from Breitbart, D.C. AG Racine: Trump, Rally Speakers Are ‘Being Reviewed’ for Inciting Violence Charges. We already know they didn't incite violence, but violence happened. If violence occurs after Biden/Harris Inauguration, can we impeach them? At TNP Rahem Kassam makes the case that The Media’s Incitement Campaign Against Congress Is What Really Radicalized Americans, with data and everything! Fox, FBI arrest Florida 'hardcore leftist' who plotted armed attack on pro-Trump protesters at state Capitol "Daniel Baker was kicked out of the Army, fought with terrorists, and supported Antifa, prosecutors claim"

I'm shocked, shocked that Wapoo manages to find Accounts of rioters who say the president spurred them to rush the Capitol could be pivotal testimony: ‘Trump said to do so’. Probably part of the leftist contingent.

Althouse finds "On Jan. 3, three days before the attack on the Capitol, Enrique Tarrio, the leader of the far-right organization known as the Proud Boys, shared a cryptic post..." at WSJ. Of course, he wasn't there because he is banned from DC. Proud Boys = Immanuel Goldstein. A comment from YoungHegelian:

Am I missing something, but have any members of the Proud Boys been charged in the Capitol riot, much less found guilty? It's kind of hard for Tarrio to have been in the riot since he was banned from DC at the time.

From what the WSJ presents it seems like just a lot of talk. I know that the rule now is that when Lefties talk about committing riotous violence, it's a 1A issue & a "rage that cannot be denied", & when Righties do it, it's sedition.

The Peacock struts,  FBI probing if foreign governments, groups funded extremists who helped execute Capitol attack "As part of the investigation, the FBI is examining payments of $500,000 in bitcoin to key figures and groups in the alt-right before the Jan. 6 riot." Gee I thought bitcoin transactions were secret. Remind not to use any.

The current FBI official told NBC News that the bureau did not necessarily suspect Russian involvement in the bitcoin transfers, which appear to have been made by a French computer programmer who died by suicide on Dec. 8 after triggering the transfers, according to French media. 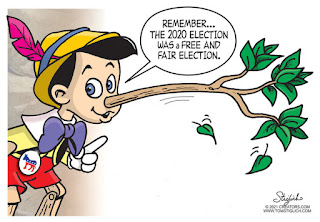 From Rick Moran at PJ Media, Democrats See the Capitol Assault as a Great Excuse to Crack Down on Civil Liberties. Karen Townsend at Hot Air, Manchin: We Can Use The 14th Amendment To Remove Cruz And Hawley, You Know. So using the legal procedures of the Senate can result in expulsion? Good know. And here I confused Manchin with a moderate. Fox, GOP senators to attend Biden inauguration Wednesday after objecting to his Electoral College win. Yeah, so what? That's the way it's supposed to be.

At NotTheBee, A 12-Foot Wall Is Going Up Around The Capitol To Protect Joe Biden And That's Weird Because I've Been Repeatedly Told By Dems Like Joe Biden That Walls Are Immoral, and don't work either. Sundance at CTH, More U.S. Military Troops Needed To Install Joe Biden Than We Have in Afghanistan

Think about it carefully…. 25,000 troops needed at the U.S. Capitol to install the Biden administration. How many armed soldiers do you need at the inauguration of the “most popular Presidential candidate in American history after the most secure election in history?”

NPR whines Federal Prisons On Lockdown Because Of 'Current Events' I kinda thought they were locked down by definition? NPR delenda est.

And on Shampeachment 2.0, Nancy is following a familiar pattern. From Nick Ballasy at JTN, As Biden inauguration approaches, Pelosi has yet to send impeachment article to Senate. Hurry up and wait. Beth Baumann at Town Hall reports that Graham Has a Suggestion for Schumer So This 'Disgraceful Saga' Can Come to an End. Dismiss the charge in the interest of  unity? Fat chance. Keith Whittington at the Volokh Report (now a Reason subsidiary), When is an Officer Impeached? V, The House and Senate are making unforced errors in laying the groundwork for an impeachment trial. Congress make unforced errors? Never? How could such a body of fine men make mistakes?

From Taylor Millard at Hot Air, Soon to be one-term Freshman GOP Congressman Peter Meijer Defends Impeachment Vote. Et tu, Andy McCarthy (NR)? The Trump Impeachment Is Deeply Flawed, but He Deserves Conviction, but from Bloomberg, Former Democratic Leader Daschle Warns Against Trump Impeachment. He's not morally opposed, he just thinks Democrats won't benefit. And I hope he's right. And NYT's caged conservative, Ross Douhat, Could Mitch McConnell Get to Yes? "Why the Republican leader should be tempted by the Senate’s opportunity to bar Trump from running for president again." Again, right or wrong is not the issue, it's strictly politics.

And last, from Capt. Ed at Hot Air, Giuliani: On Second Thought, I Can’t Be Trump’s Impeachment Lawyer

Rudy Giuliani now says he won’t on the Trump impeachment defense team. “Because I gave an earlier speech [at the January 6 Trump rally], I am a witness and therefore unable to participate in court or Senate chamber,” he tells me.

Linked as Blog of the Day at Pirate's Cove the daily If All You See . . . Thanks, Teach!