Annals of the Biden Crime Family - The Weekend Update

China Joe has been in office a little more than a week, so let's see what's happening. They say personnel is policy, so let's see who he is staffing his administration with. Labor Pick Paid Biden-Linked Firm Tens of Thousands Prior to Nomination "Boston's Marty Walsh has paid Anita Dunn's firm $90k since September"(Wa Free Bee), a mere pittance by political standards, also, Biden Energy Pick Set to Make Millions from Prominent Energy Company "Jennifer Granholm's ties to energy industry will likely lead to conflicts of interest" and according to Da Caller, Biden’s Energy Nominee Divvied Millions In Taxpayer Funds To Alternative Energy Startups That Went Bankrupt. So we can foresee more Solyndras in the future. PM, New Biden hire allowed Washington state to be defrauded out of millions by Nigerian scammers. Now, that's the way to spend taxpayer's money!

It was announced Friday that Suzie LeVine, Commissioner of Washington State's Employment Security Department (ESD), will be leaving her post at the end of January to take a position in the Biden Administration.

LeVine was directly responsible for the loss of hundreds of millions of dollars from Washington state unemployment funds after the agency was defrauded by Nigerian scammers.

An audit of the agency found that through the end of June 2020, the ESD had lost $600 million dollars to Nigerian fraudsters. They recovered only about $250 million of the missing funds. ESD said that more had been recovered since June for a total at the time of $357 million. Original estimates placed the loss at closer to $1 billion, though a large amount of the difference was recovered when the fraud was detected.

The audit found that LeVine and ESD had deliberately bypassed the waiting period for benefits in order to send out unemployment checks faster. That action was taken by LeVine at the urging of Democrat Governor Jay Inslee. LeVine was a political appointee of Inslee’s who had been a donor to his campaign.

From Tristan Justice at Da Fed, The Biden Administration Just Made Peter Strzok’s Wife A Top SEC Official, well, she'll have more time for the job, once Peter gets sent to jail for insurrection! (A case where the word might actually fit). Maybe she can hire Lisa Page as her aide-de-camp.

A little over a week and Biden's brother touts proximity to new president in ad for Florida law firm (JTN) while Karen Townsend at Hot Air reports that Frank Biden Uses His Brother Joe’s Name In Inauguration Day Ad For Law Firm. They're not even trying to hide it.

And from Jordan Davidson at Da Fed, Violating Norms On Day One, Biden Axes Respected Labor Attorney. I only point out they hypocrisy of how they would have whined if Trump had fired a Democrat appointee. The unsinkable Mollie Hemingway at Da Fed, Breaking Norms And Precedent, Biden Attempts To Purge Career Intelligence Official

In a stunning violation of precedent, Biden’s National Security Agency (NSA) placed General Counsel Michael J. Ellis on administrative leave pending a Defense Inspector General investigation of his recent appointment, as well as an unspecified claim of mishandling of classified information. Ellis has maintained a top security clearance, without any blemish, for more than a decade. He is a trained classification official both as a military officer and civilian.


While Ellis has prominent defenders from his many years of service in the intelligence community, his detractors include high profile participants in the Russia collusion hoax, proponents of former National Security Advisor John Bolton’s attempt to publish classified information in a book, and some of the individuals who orchestrated the Ukraine impeachment effort.

At Da Lid, Joe Biden, The Job-Killing President: 70,000 Jobs Killed On Day One, More Since by killing the border wall and Keystone Pipeline. Global News, Premiers tell Trudeau they ‘want to go to war’ with U.S. over Keystone XL: sources. But Joe was going to normalize our relationships with our allies, right? Western Journal, Unions That Endorsed Biden Lash Out After He Stabs Them in the Back on Day 1

Da Wire, Biden Stops Trump Order To Slash Price Of Insulin, EpiPen, But don't worry, we'll raise your taxes to help! This might explain it, though, Biden Says ‘I Don’t Know What I’m Signing,’ Signs Executive Order Anyway
That was quick! Jack Posobiec, BREAKING: Large US military convoy enters northeast Syria on first full day of Biden presidency  https://almasdarnews.com/article/large-us-military-convoy-enters-northeast-syria-after-damascus-demands-immediate-withdrawal/ Back to the foreign wars!
John Solomon at JTN, 'Lawyer up, and get out': FBI first spurned Hunter Biden laptop, says Delaware tech repairman "FBI "didn't show an interest in any of the money" after seizing Hunter Biden's laptop, according to John Paul Mac Isaac, the computer shop owner who reported it to authorities." I can't imagine that will get any better.
#HerToo! Biden accuser Tara Reade says it was 'unspeakably hard to watch the man who assaulted me' take the oath of office "'I will not be slienced'" (sic) at Da Blaze. Oh yes you will, once the media decide to spike your story, and social media censors it.
The Fed staff has Here’s The Full List Of Every Lie Joe Biden Has Told As President, as of 2 days of being President. He needs to step up his game.
And, since CNN, WaPoo and the NYT won't, The Wa Free Bee has the handy dandy BIDEN COVID DEATH TRACKER 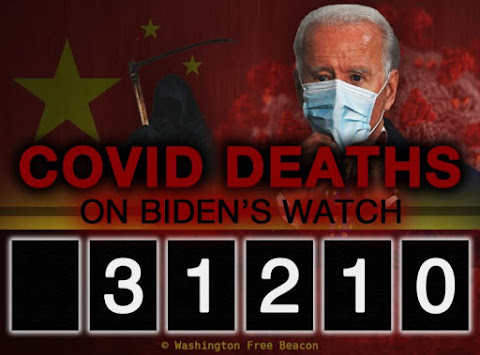