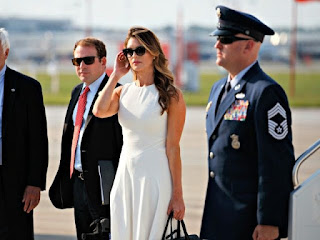 
Hope Hicks, one of President’s Trump’s longest serving aides, will leave the White House next week, according to two administration sources, amid a general exodus of West Wing staff before Joe Biden’s inauguration.

Hicks, 32, is one of the survivors from the early days of the 2016 campaign and worked for the Trump Organization before that.

As one of the president’s most trusted confidants, insiders said they had expected her to continue working for Trump after leaving the White House. 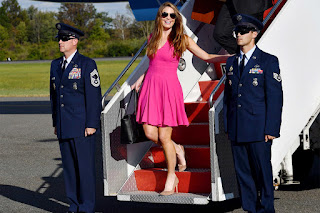 A senior administration official said news of her departure triggered unfounded rumors that she was resigning in protest at the attack on the United States Capitol on Wednesday by Trump supporters but that Hicks had told colleagues that was not the case.


“The majority of staff will be out by next Friday. That’s normal,” said the official. “We have to off board, hand over computers, have an ethics debriefing, and that can’t happen just on the last day, the 19th.

“She is leaving … as is everyone else.”

Althouse,  If Trump knew there was a plan to storm the Capitol building, then his speech to the crowd was an incitement, even though he never told the crowd to commit any act of violence.

This morning, I'm seeing this at Buzzfeed:


The first glimpse of the deadly tragedy that was about to unfold came at 9 a.m. on the morning of the insurrection for one Black veteran of the US Capitol Police....
“I found out what they were planning when a friend of mine screenshot me an Instagram story from the Proud Boys saying, ‘We’re breaching the capitol today, guys. I hope y’all ready.’”

Now, that's 9 a.m. on the day of the protest, so it could be a plan that arose at the last minute. But Trump's speech did not begin until 1:11 p.m. That's 4 hours of lead time. Perhaps that Capital Police officer is lying or mistaken or perhaps he doesn't exist at all and Buzzfeed is wrong. But it's a fact that can be checked with Instagram. And I want to see all that there in social media, all the evidence of a plan, and what law enforcement knew about this plan, whether Trump was informed, and why there wasn't better protection of the Capitol.

I have held off from believing that Trump incited the crowd to breach the Capitol. You can see that in my 7 statements post. But if he was informed of a plan, then I will read all of those statements as an incitement, and I would have to say that he should resign. 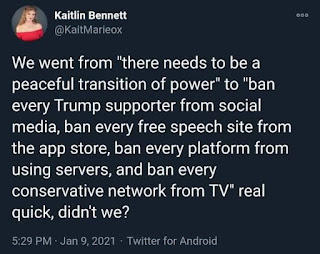 If ifs and ands were pots and pans . . . And speaking of advance planning, the Wombat has rare long post on Night Of The Digital Long Knives


I don’t think anyone except the Silicon Valley oligarchs, who no doubt had this planned well in advance, and Vox Day, who had expected this for some time – expected the whole sale purging of conservative & populist accounts from social media that’s taken place this week. President Trump, Lin Wood, Sidney Powell, and General Flynn, to say nothing of such badthinkers as the #WalkAway group on Facebook, have all found their Twitter and Facebook accounts shut down. Not content with that, Apple and Google both dropped the Parler app from their app stores, and to make sure you proles get the message, Amazon Web Services is terminating Parler’s contract as of Sunday, which means they’ll be offline for at least a week while they try to find alternative hosting. I’d be willing to bet that even if they do succeed in finding/building infrastructure to replace what they had on AWS, they’re going to get the same treatment Gab got – people trying to support them with their credit and debit cards will be blocked, hosting services that agree to host them will be pressured to drop them, and every means short of actual physical violence will be used to drive them out of business. For that matter, after the Antifa/BLM riots of this past summer, it wouldn’t surprise me at all to see Cuban-style “divine mobs” used to destroy server farms belonging to companies hosting websites deemed guilty of “sedition”, “incitement”, or whatever excuse people like Maxine Waters want to use.

Daniel Greenfield lays out the obvious part of the problem rather clearly. Control of the Internet, which used to be a flexible network designed to automatically route information around blockages, has now fallen into the grasp of a handful of companies, all of them seemingly eager to institute a Red Chinese social credit system. Conservatives and populists have relied for too long on Section 230 to protect us from exactly the kind of hamfisted behavior that Jack Dorsey, Sundar Pichai, Jeff Bezos, and Tim Cook are engaging in right now. We have a very limited amount of time to find and use alternatives like blogs, e-mail lists, Telegram, Signal, and Gab; we must also build alternative financing structures so the wokerati running Mastercard and Visa can’t cut off the flow of funds. People used to accuse Vox Day of being paranoid when he said these things a few years ago. What’s keeping me awake nights is that Vox might not have been paranoid enough.

Matt Margolis at PJ Media, Rush Limbaugh: The Swamp Is Really Scared of Trump, Here's Why

Rush then addressed Pelosi’s bizarre suggestion that she has the military on standby in case Trump wants to launch a nuclear attack. “Who are we gonna nuke?” Trump asked. “The little pot-bellied dictator, Kim Jong-un?”

Pelosi is obviously not afraid Trump will launch a nuclear attack. So what are they afraid of? According to Rush, “They’re terrified that Trump is gonna unleash classified documents. You know, he’s got a bevy of ’em, folks. He’s got classified documents about the hoax, the four-year coup […] the four-year effort to get the election results of 2016 overturned. There are all kinds of people who broke the law, all kinds of people who are quaking in their boots. They’re worried silly that Trump is gonna unleash some of these classified documents.”

PM, Laptop stolen from Pelosi's office during breach at Capitol

"A laptop from a conference room was stolen. It was a laptop that was only used for presentations," Drew Hammill, Pelosi's deputy chief of staff, said in a tweet on Friday.

Well maybe, but now couple it with this talk  Lt. Gen Tom McInerney Must watch Everything explained!
The man either knows something scary, or he needs to adjust his tinfoil hat liner.
The Wombat has Rule 5 Sunday: Julie Strain, RIP and FMJRA 2.0: Too Much Too Young ready for your digital amusement.
Posted by Fritz at 9:54 AM