Screw Politics, I Went Fishing Instead 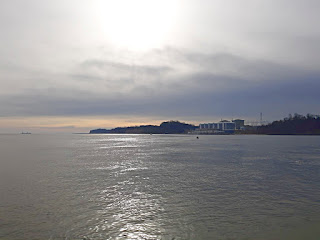 I was listlessly sitting around at breakfast trying to motivate myself for an election post, when I got a call from Pete, who, recently returned from a trip to Florida, wanted to check out the fishing at the power plant. We met at 10 AM, left the dock and were idling into the current at the power plant a few minutes later.. 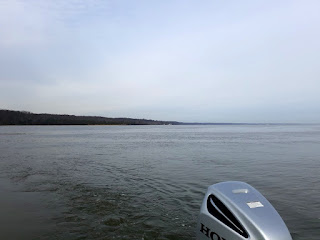 It's cold today, frost, and overcast, but very still.
Unfortunately, there were no fish to be had, so we left after a few drifts. Pete will probably move his boat south to Buzz's Marina, and fish there for a while. 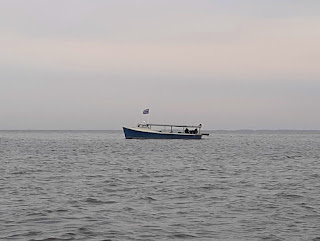 On our way back, Pete spotted a boat out near the channel that he suspected was gill net fishing. Hoping  they knew something he didn't we went out to check it out, and they didn't. We didn't see them landing any fish in time it took us to motor around them at a good distance, although they were, indeed, hauling in a net. You might remember the blue boat with the Trump flag; it fished crabs most of the summer just off the beach. 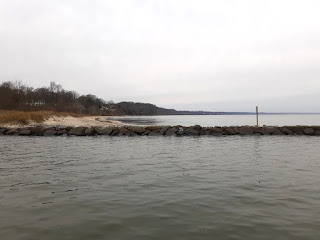 On the way home, I spotted Whitey, standing the shallow water near the north jetty; you can barely see him in this lousy cell phone picture as a couple of white pixels.
Posted by Fritz at 12:30 PM