As Matt Margolis at PJ Media notes, Now the Washington Post Admits Trump Did Not Incite the Capitol Riot, but not in so many words, but they report on groups pre-planning, which means Trump couldn't have incited them. At Hot Air, AllahPundit echoes Pelosi: There’s No Question That Certain House Members Gave “Aid And Comfort” To The “Stop The Steal” Campaign. You mean they spoke their minds? At Da  Mail, Nancy Pelosi says Donald Trump could be accessory to MURDER for inciting the Capitol MAGA mob in final parting shot in final parting shot at 'stain on our country'. Well, if you want to go there, what Democrats didn't incite murder in the BLM riots this year? And what could go wrong with Acting DHS Deputy Secretary: Pelosi Wanted ‘Crew-Manned Machine Guns in Washington – That Was Rejected’ Nick Ballasy and Suzy Katz at JTN, Were Pelosi, McConnell warned of potential violence before Capitol riot? Offices remain mum. So the answer is yes? Suppressing more evidence that Trump did not incite the incursion.

Joy Pullman at Da Fed, Democrats Are Framing Americans As Domestic Terrorists So They Can Do To Us What They Did To Trump In Spygate  Michael Yon, Washington, D.C. — Now Effectively Under Martial Law. Insty fleshes out his tweet at the NYPo, Biden’s militarized inauguration showcased Democrats’ insecurity 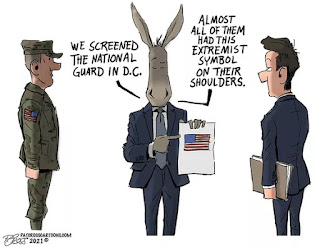 Nothing says, “This was a perfectly normal election, and now it’s time to come together as a united nation,” like having your swearing-in behind 12-foot-high razor wire surrounded by 25,000 troops whose loyalty you doubt. That’s what we witnessed at President Biden’s inauguration on Wednesday: a grim testament to the fundamental insecurity and fragility of the re-ascendant liberal elite.

Democrats no doubt hoped that the optics of this military-heavy presidential installation would convince ordinary Americans that the republic is in peril from the populist ferment that sent Donald Trump to the White House in 2016 and garnered more votes four years later than any GOP ticket, ever. It’s a peril that can only be addressed by, in James Comey’s lovely phrase, “burning down” the Republican Party.

But the whole aura was less Lincoln and more bananas. As in banana republic.

AllahPundit again, McCarthy: On Second Thought, I Don’t Believe Trump Provoked The Attack On The Capitol and at Da Mail, Rudy Giuliani hits out at Bill Barr for blaming Trump for Capitol riots and says cause of unrest was the ex-Attorney General's 'failure to investigate voter fraud' which left mob 'angry'. From Jordain Carney on Da Hill, McConnell faces conservative backlash over Trump criticism. He's an old rich guy, and doesn't care anymore. Breitbart, Senate Republicans Warn McConnell Ahead of Impeachment Trial "suggesting that they will no longer be able to support Senate Minority Leader Mitch McConnell (R-KY) as leader if he votes to convict the former president." Former Republican, Capt. Ed at Hot Air, Senate Republicans: Votes To Convict Trump Are Few — And Dwindling. I can't really tell if he's happy or sad. And more from Breitbart, Wyoming Republican Files to Primary Liz Cheney After Impeachment Vote, lest she forget what "represent" means.

On the impeachment itself, AllahPundit whines that the Impeachment Trial May Be As Quick As Three Days. So little to savor! Also, they don't have a very strong case, once you actually read what Trump said, instead of the what the reporters and Democrats (but I redund) claim he said. Newsmax, Biden Leaving Impeachment Mechanics to Senate. Well, it's not his job, either. CNBC, Trump hires impeachment lawyer, McConnell wants Senate trial in February for Capitol riot incitement charge, prompting Politico to write that Trump starts taking his second impeachment seriously "The president is hiring a respected legal hand with a familiarity on voting laws as a Senate trial nears."

Trump’s trial, in which the Senate for the first time will weigh the alleged crimes of an ex-president, presents a tangle of constitutional difficulties for Roberts, legal scholars told the Washington Examiner. That could be good news for the chief justice, who faced harsh scrutiny during Trump’s first trial and wants no part in the second go-around, according to multiple reports.

The strongest argument for Roberts to stay on the sidelines is the fact that the Constitution only directs the chief justice to preside over a sitting president’s trial, said Michael Dorf, a professor of constitutional law at Cornell University. Under normal impeachment conditions, he added, that arrangement saves the vice president, who usually acts as the presiding officer over the Senate, from the appearance (or the reality) of a conflict of interest.

But this is no normal impeachment by any stretch. Trump is no longer president. And if the Senate convicts him, then Vice President Kamala Harris will not become president. Moreover, since the text of the Constitution does not specifically speak to the situation, Roberts can reasonably argue that it is not his business to get involved in a partisan squabble.

Pesky thing, that Constitution.
At the Other McCain, Smitty pens ‘Resident Biden

It’s not to my taste to wish harm on anyone, but this year’s total economic crash is going to be precisely what the country has deserved. Hopefully we repent and reclaim our elections from the Commies. 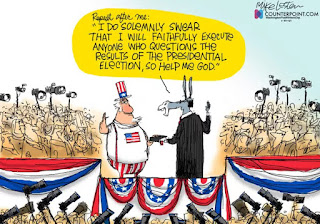 I need to be clear on The New Rules: If people think the election was unfair and/or involved fraud, they're not permitted to say so in public-- is that correct? I mean obviously it was ok in 2016-2020 but I think not in 2020/2021, from what I'm gathering.

"Remember in the Lion King when Scar cheated to win the title as king? And the pride land was overrun with the hyenas? And all of the lions lost everything they had built and maintained? Just asking. No reason."

And our favorite Congressional election race? Jazz Shaw at Hot Air, Do We Have A Winner In NY-22 Yet? Nope. This really is a comedy of errors, and a glowing testimony to the folly of mass mail-in voting. Read it and weep.