Say, so how's that impeachment going, anyway? Susan Ferrechio at WaEx wonders The House impeached Trump again, but what about the trial? Byron York's Daily Memo calls it The Senate’s coming impeachment fiasco. At Da Fed, Chris Bedford details McConnell’s Impeachment Blunder. At the Dispatch, Haley Byrd Wilt and Andrew Egger explain How Impeachment Could Hinder Biden’s Agenda. Gee, that would be too bad, wouldn't it? Zack Halachack reports  Lisa Murkowski claims House was right to impeach Trump for 'unlawful actions'. You know, I wouldn't be too surprised to see Murkowski and Manchin switch sides. And it's a topsy-turvy world when Rose McGowan is a voice of reason, from Fox, Rose McGowan calls Trump's second impeachment 'cult propaganda,' 'a theater of mass distraction'. Well, sort of, in a twisted way. 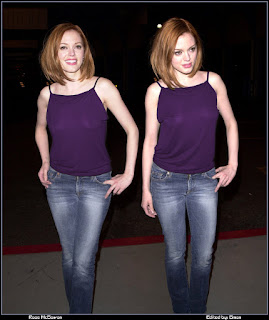 Rose McGowan has ripped the House of Representatives' vote to continue the process of removing President Trump from office.

The Hollywood actress-turned-activist took to Twitter late Thursday to share her opposition to Wednesday's House vote of 232-197 to impeach the president for "incitement of insurrection" after a mob of his supporters besieged the Capitol on Jan. 6 in a failed attempt to stop the certification of President-elect Joe Biden's Electoral College win.

In a scathing tweet, McGowan called the actions against Trump cultlike which is something she's said numerous times in the past about Hollywood.


"This impeachment is Cult propaganda. A theater of mass distraction. US cult members on the left will cheer, those on the right will be in a fury," McGowan wrote. 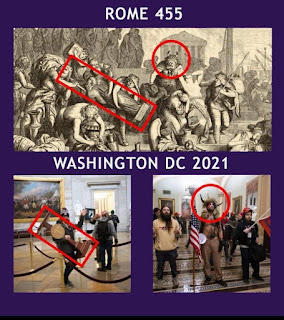 "'Strong evidence' suggests Capitol rioters intended to ‘capture and assassinate’ officials, US prosecutors say" (Fox News). Chansley is the rioter who's getting extra attention because he costumed himself in a fur hat and horns. He also, as the detention memo says, "has spoken openly about his belief that he is an alien, a higher being, and he is here on Earth to ascend to another reality."

But almost as quickly, from Breitbart, a DOJ Official: No ‘Direct Evidence’ of Plot to Kidnap, Kill Lawmakers in Capitol Riot “We don’t have any direct evidence of kill capture teams,” Sherwin told reporters during a press briefing. Also at tweet from Reuters.

From Jazz Shaw at Hot Air, Associated Press Explains The Difference Between A Riot And A Riot. It's a riot when there are Republicans involved, it's a mostly peaceful demonstration when it's Democrats, of course, silly! Marc Thiessen at WaPoo points out how Democrats were for occupying capitols before they were against it. Ace, Matt Gaetz Reads Insurrectionist Democrats the Riot Act.  Daniel Greenfield at Front Page makes the case that The Capitol Hill Riot Was Pelosi’s Fault, Not Trump’s. She had 2000 Capital Policemen at her disposal, and chose not to use enough, despite warnings. The question is whether she did that deliberately or stupidly. WaPoo, Capitol Police intelligence report warned three days before attack that ‘Congress itself’ could be targeted.

Meanwhile evidence continues to accuumlate to suggest that the attack on the Capitol was pre-planned by some outside groups, including lefty anti-fa types. Matt Vespa at Town Hall, Major Twist in US Capitol Storming Might Have Gutted the Democrats' Narrative on Trump Impeachment. Do you really think Democrats care about the facts? Read the whole thing for some great tweets.

Evidence uncovered so far, including weapons and tactics seen on surveillance video, suggests a level of planning that has led investigators to believe the attack on the US Capitol was not just a protest that spiraled out of control, a federal law enforcement official says.

Among the evidence the FBI is examining are indications that some participants at the Trump rally at the Ellipse, outside the White House, left the event early, perhaps to retrieve items to be used in the assault on the Capitol.

A team of investigators and prosecutors are also focused on the command and control aspect of the attack, looking at travel and communications records to determine if they can build a case that is similar to a counterterrorism investigation, the official said.

Ace, The Antifa/BLM Insurrectionist Who Stormed the Capitol Has Been Arrested. And, Guess What? He's a Cherished Guest of... You Guessed It, CNN. John Sullivan. See the tweet at Aces. Nick Arama at Red State, Who Is John Sullivan, Who Was the Woman With Him and Their Appearance on CNN After the Capitol. Currently being lionized by Rolling Stone, ‘I Don’t Think She Deserved to Die’: Black Activist Who Filmed Ashli Babbitt Shooting Speaks Out "Activist and video journalist John Sullivan describes how he captured raw, comprehensive footage of the chaos and violence at the storming of the U.S. Capitol" Noqreport, James, brother of accused leftist provocateur John Sullivan, claims 226 Antifa members started Capitol riots "As Rudy Giuliani noted on Twitter, why wasn't this brought up during the sham impeachment hearings?"

According to the text, James Sullivan makes a very bold claim: “I’m currently working with the FBI to expose and place total blame on John and the 226 members of antifa that instigated the Capitol ‘riot’ I was able to get my agent out of trouble along with three other uthan’s.”

From TNP, more on Sullivan, EXTRAORDINARY: Chat Logs Reveal Alleged Plan To Turn Trump Rally Into Violent Riot Bernie Kerik has a video tweet,  #antifa planning Capitol assault... for those that said #antifa and #BLM weren’t involved, This appears to refute that. It's not all that clear to me, but I don't have much context. Also Kyle Becker, Unidentified suspected 'Agent Provocateur,' who was spotted breaking a door in John Sullivan's video during Capitol siege, is now on FBI's "MOST WANTED" list. The UNSUB appears to have led a potential "coordinated action" leading to shooting of Trump supporter Ashli Babbitt. Joe Hoft at Gateway, Another Violent Leftist Arrested at US Capitol Protest: Registered Democrat and 34-Year-Old Son of a New York Judge.

At Am Con Collective Guilt And The New Witch Hunt. Are you now or have you ever been a supporter of Donald Trump. A comment at Althouse by Rocean,

Again, 200,000 trump supporters were at the rally. 200 were in the Capital Hill Building. BTW, its a 45 minute walk from the Trump rally to the building.

Notice how difficult it is to find the following things in the media:

01) quotes from Trump's "horrible speech".
02) Details of the how/where/when for the ONE Policeman "injured" and hospitalized by the violence. And the ONE who died.
03) Anything about the murder of Ashli Babbitt
04) Details about the 3 who died of "Medical emergencies"
05) Dollar amount of property damage.
06) Number of protesters hospitalized and/or injured by the police
07) Identity of the policeman who killed Ashli babbitt
08) Number of Peaceful Trump supporters who were NOT in the capital building

I've found some of this information, but only by hunting for it on the internet.

The link I’m posting below, if true and accurate, explains why we’re not seeing any official statements or MSM coverage of who shot Ashli Babbitt. It’s because no matter what explanations they try to offer, if a police officer says he wants to shoot or kill a Trump supporter and does so, doesn’t matter if he says “I feared for my life.” That statement has to be proved, and the video is proof positive that a reasonable man wouldn’t think so. His Facebook statements make the death of Ashli Babbitt premeditated murder. On Federal grounds prosecuted by federal attorneys in federal court. Complete with death sentence possibility

That brings up another personal bugaboo of mine that many others share. Immigrants, even after naturalization, should not be law enforcement officers. Period.

The linked article identifies the shooter by a particular beaded bracelet on his wrist. Same design beaded bracelet on previous photos of that officer. Seems kinda legit, unless these beaded bracelets are common, or photos are doctored. Link also claims this officer has Facebook posts expressing violent intent toward Trump supporters, but provides no link.

A search of the officers name brings up 'FactCheck' which attacks the source of the info-a definite right winger- as proof that the identity is false.

Apparently this info has been out for several days with no denial by the officer, or any official source.

The video of the killing and the earlier photos do ,indeed, show the same bracelet.

Check it out for yourself. 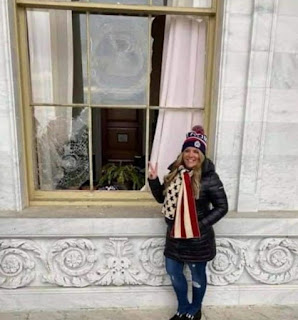 AllahPundit at Hot Air has a fever dream, So It Sort Of Looks Like The MyPillow Guy Might Be Trying To Get Trump To Stage One Last Coup Attempt. Seriously? Take a vacation, Allah. Twitchy reports Realtor from Dallas who was arrested for storming the Capitol asks President Trump for a pardon.

Jenna Ryan, the Dallas based real estate agent who went viral for flying to D.C. on a private plane before being arrested for her role in storming the Capitol, asked President Trump for a pardon.

She told a local Dallas news station, “I would like a pardon from the President of the United States. I think that we all deserve a pardon. I’m facing prison sentence. I do not think I deserve that”

The price of stupidity is pain.

John Hinderacker at Power Line asks Did the Democrats Steal the Presidential Election?

First, this question: why are the Democrats so hysterical in their insistence that fraud not be mentioned? One reason is obvious. Joe Biden will take office under a cloud, since close to half of all Americans doubt that he really won the election. The Democrats want to stamp out such doubts to preserve Biden’s authority as president.

But there is a second reason that may be more important. The Democrats want the lax voting procedures that prevailed in 2020 to continue in the future. They know that efforts will be made in many states to improve ballot integrity, and they want those efforts to fail. By rendering all discussion of voter fraud out of bounds, they hope to forestall reforms that would make it harder for them to cheat, or enable cheating, in the future.

So, did the Democrats steal the presidential election, or not? I don’t know the answer to that question. No one does. A number of statistical analyses have been done, which on their face suggest large irregularities. I wrote about one such analysis, by John Lott, here. . . .

More links at the Wombat's In The Mailbox: 01.15.21. The Wombat has Rule Five Sunday: Jayne Mansfield and FMJRA 2.0: For Whom The Bell Tolls awaiting your digital pleasure at The Other McCain.