As Rick Green at ET calls it, The Coming Show Trial

According to Wikipedia, “A show trial is a public trial in which the judicial authorities have already determined the guilt, and/or innocence, of the defendant. The actual trial has as its only goal the presentation of both the accusation and the verdict to the public so they will serve as both an impressive example and a warning to other would-be dissidents or transgressors.”

Daniel Greenberg at Front Page, Unite and Heal With Show Trials and Fascist Purges "Enjoy unity at gunpoint in the Bidenist banana republic." WaPoo suggests dragging it out for greater dramatic effect;  As Senate prepares for a speedy impeachment trial, some are urging a slower, more deliberative approach. "Some" usually means whatever a reporter or editor thinks. For HuffPo, cited at Yahoo, and echoed by Hot Air, “This Is Their Best Chance To Put A Stake Through Donald Trump’s Political Future”, which is not a proper use of the political process, but at least they're being open about it. Never-Trumper, and once semi-respected Jonah Goldberg dispatches Impeachment Shows How Partisan Politics Have Swamped the Constitution "If Nancy Pelosi were serious about garnering bipartisan support for impeachment, there were steps she could have taken. . . . It’ll play great in Democratic attack ads but not in the history books." They intend to rewrite the history books too.

From the Bulwark Boyz Girlz,  Where’s the Chief? "John Roberts should be presiding over the Senate’s second Trump impeachment trial.". Nope, he wisely declined. Althouse: "There is no authority granted to Congress to impeach and convict persons who are not 'civil officers of the United States.' It’s as simple as that."

"But simplicity doesn’t mean unimportance. Limiting Congress to its specified powers is a crucial element in the central idea of the U.S. Constitution: putting the state under law.... The interpretation that persons are subject to impeachment and conviction even if they are not civil officers would greatly expand the Senate’s ability to prevent future office-holding.... [If] removal is irrelevant, any person who was once a civil officer might be impeached and convicted and by this means disqualified from any future office. Is it really compatible with the system of democratic representation...?... [P]runing the disqualification penalty away from its basis in removal creates a bill of attainder, a punishment levied by a legislative body without a criminal trial. An impeachable offense, it is well established, does not have to be a statutory crime. Thus disqualification standing alone and not as appurtenant to removal is precisely the sort of attainder envisaged by the Framers. Is it consistent with the American system of laws, to say nothing of the prohibition on attainders in Article I, Section 9, to allow Congress to impose such draconian penalties without a jury trial—in the absence of the removal of the officer by the Senate...?"

I stood up to my party on Jan. 6th. Where were you when Bernie supporters were shooting GOP members? When VP Harris was crowdfunding bail for looters and rioters? You only have moral authority if you stand up for what’s right ALL the time, regardless of party.
@aoc

Ace, Republican Congressmen Urge Censure for AOC, Over Her Ridiculous, Violence-Inciting Claim That Ted Cruz Tried to "Murder" Her;

Congressional Staffer Snowflakes Bleat About the "Trauma" They Experienced, Watching the Capitol Hill Riot on TV

It was just a few years ago that a deranged leftist, incited by hot chatter from Rachel Maddow, attempted to execute seven Republicans at a baseball field. 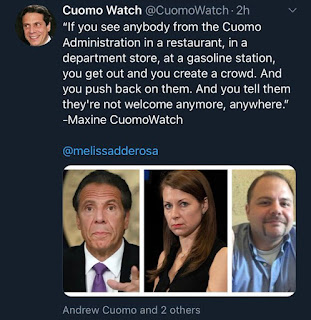 Twitter must be bad for people's memories; why else would they fall for this:  PM, Democrats condemn Maxine Waters' words when they're alleged to be against Cuomo—but she said them about Trump in 2018


Twitter account CuomoWatch repurposed the quotes to be about the Cuomo administration in New York—though Waters used them against Trump in 2018. Attorney General Letitia James' released a report on Thursday that found the Cuomo administration had underreported the deaths in nursing homes in that state during the pandemic by as much as 50 percent.

Democrats didn't like these vile words when they appeared to be spoken against Emmy-award winning Cuomo. Lis Smith, formerly an advisor to Pete Buttigieg, wrote that it was "way over the line. Especially in light of what happened at the Capitol on Jan. 6."

Mediaite whines that Matt Gaetz Demands Kevin McCarthy Hold Vote on Liz Cheney: ‘If He Doesn’t, the Republican Conference Is a Total Joke’ Ace, Poll: Majority of GOP Voters Want Trump to Start a New Party, Saying It Would Be Better Than the GOP

The amazing thing is: None of this will do a blessed thing to suggest to the crusty grifters who control this party that maybe they're doing something wrong and need a rethink.

The GOP will remain Corporations and Wall Street forever. They will continue attempting to drive American wages as close to zero as possible, to benefit a group of hardcore leftwing billionaires who are killing them politically -- but paying them off nicely.

I still hope for change from within, but sometimes political parties have to die for their principles to live.

From ET, Maricopa County Officials Approve Forensic Audit of Election Systems. But has the evidence been wiped? Meanwhile, Democrats plot to steal all future elections, Dem lawmakers introduce bill that would send all registered voters ballots before Election Day "The legislation also would mandate automatic voter registration of every U.S. citizen who supplies identifying information to a state's motor vehicle authority" Including lots of empty and duplicates that can be harvested at will. (Alex Nitzberg at JTN)