Dolphins at Home in the Potomac Again 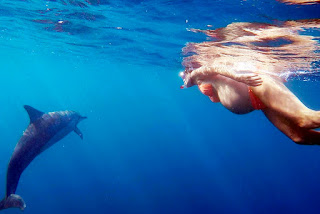 Dolphins are swimming, mating and even giving birth in the Potomac


Five decades ago, President Lyndon B. Johnson declared the polluted Potomac River a “national disgrace.” Although it is now much cleaner, officials in Washington are still not convinced the water is safe for humans to swim in.

But many miles downriver, where the Potomac widens to lakelike proportions as it flows toward the Chesapeake Bay, it teems with a different species of swimmers whose presence may signal healthier waters: dolphins.

During the past four years, researchers who study the common bottlenose dolphins swimming this part of the Potomac have hardly been able to keep up with their numbers. Dolphins are easily identified by their distinct fins or marks on their bodies, and in 2015, scientists identified about 200 individuals in one section of river off Virginia’s Northern Neck. Now they have counted well over 1,000 dolphins, which sometimes congregate in groups of more than 200. 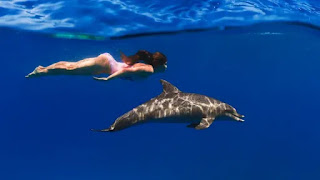 But an even more unusual development in this effort to understand the dolphins in “the nation’s river” came in August, when researchers with the project, based at Georgetown University, witnessed evidence of a dolphin birth. It was only the third documented observation of a wild dolphin birth, and those present say they hope it makes area residents view the Potomac differently.

“There are dolphins here, and there’s breeding and birthing going on, and this is connected to D.C. — such a populated, urban area,” Ann-Marie Jacoby, associate director of the Potomac-Chesapeake Dolphin Project, said on a recent morning while scanning the lower Potomac from the 18-foot skiff that serves as a research vessel. “You follow it further down and there’s all this wildlife here. And what people are doing up there, it does affect wildlife. They are directly linked to this oasis.”


The fact that dolphins are back is certainly a good sign for the water quality of the Potomac, although I'm not sure it was water quality that was keeping dolphins out. Certainly the number of dolphin sightings all over mainstem Chesapeake Bay are way up in recent years, and most of those areas were already cleaner than the Potomac is now. I suspect a growing population of dolphins coast wide, as well as improved fisheries.

As far as the water quality of the Potomac, my personal feeling is that it might be save to swim in, but I wouldn't drink it, because, to steal from W.C. Fields, dolphins fuck in it.

The Wombat snuck Rule 5 Monday: Chris Noel in a day late.
Posted by Fritz at 5:57 PM