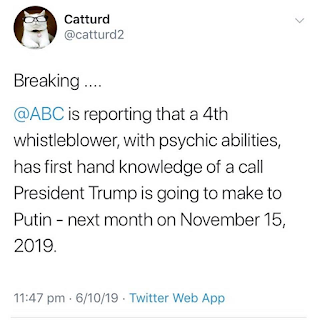 Some interesting developments in the "whistleblower" saga. It seems that  Joe Biden worked with whistleblower when he was vice president, officials reveal (WaEx).

The 2020 Democratic candidate with whom the CIA whistleblower had a "professional" tie is Joe Biden, according to intelligence officers and former White House officials.

Michael Atkinson, the Intelligence Community's inspector general, told members of Congress that the whistleblower had a "professional tie" to a 2020 Democratic candidate. He had written earlier that while the whistleblower's complaint was credible, he had shown "some indicia of an arguable political bias ... in favor of a rival political candidate."

A retired CIA officer told the Washington Examiner, “From everything we know about the whistleblower and his work in the executive branch then, there is absolutely no doubt he would have been working with Biden when he was vice president."

As an experienced CIA official on the NSC with the deep knowledge of Ukraine that he demonstrated in his complaint, it is probable that the whistleblower briefed Biden and likely that he accompanied him on Air Force Two during at least one of the six visits the 2020 candidate made to the country.

As you might imagine this has caused some digital tongue to wag. A shockingly neutral comment from Sundance at CTH, REPORT: Joe Biden Had Working Relationship With ‘Whistle-blower”…


This makes sense on many levels.  As a member of the Obama National Security Council, the CIA “whistle-blower” would have held a working relationship with Vice-President Biden who was given the primary authority to oversee Ukraine effort within the Obama administration.

Ace, As Suspected, Fake "Whistleblower" Worked For Biden When He Was Vice President "Oh so his lawyer was misleading in exactly the way I suggested." Insty, THIS IS THE PART IN WHICH I GLOAT: Joe Biden worked with whistleblower when he was vice president, officials reveal


You may recall — and if not, I’m sure as hell gonna remind you — that just yesterday I wrote, in Who Does the Whistleblower Know?:


I think the most plausible inference is that the whistleblowers are connected to Biden’s campaign, or to the DNC, and were shaken by the possibility of Biden and Crowdstrike being investigated because they know there is something there to be found. 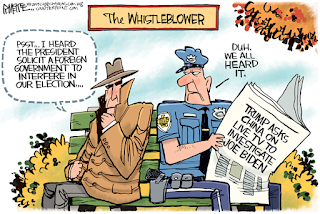 
It seems to me there are two different issues that need to be considered here. On the one hand, the whistleblower may have been a complete professional when he was working with Vice President Biden. It’s not necessary to believe he was behaving like Strzok to ask questions about what’s motivating him now.

The fact that the whistleblower went to Democratic staffers working for Adam Schiff and was referred by them to an attorney who could put together a more credible complaint doesn’t help his case. Nor does the fact that Schiff lied about his contact with the whistleblower, suggesting he was trying to make this look less partisan than it really was.

In other words, this complaint already had a whiff of partisanship about it and now we learn the whistleblower may be on a first-name basis with the leading Democratic candidate. To be clear, I’m not suggesting some kind of conspiracy theory here, just that it’s starting to look like this person might have a partisan rooting interest in attacking President Trump. 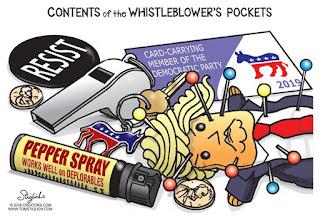 The Biden Boomerang, Editorial of The New York Sun

Of all the scandalous elements bubbling out of Ukraine, the most shocking is the idea that an American president, duly elected and sworn, might be impeached on testimony of an individual whose name is being kept secret — from the President, the Congress, and the American voter. The Wall Street Journal, in an important editorial issued Wednesday, calls it “impeachment in secret.” 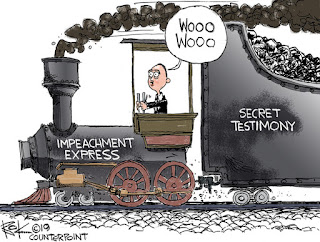 It seems unlikely that they can keep the whistleblowers name hidden for long, but now, from sundance,  If Accurate, The Impeachment Game is Over – Fake Whistleblower Lawyers Now Retreat From Testimonial Appearance…


A report from the Wall Street Journal outlines a request by lawyers for the fake CIA ‘whistleblower’ that ultimately spells doom for the entire phony construct of the impeachment construction by anonymous complaint.

The Wall Street Journal is reporting the anonymous gossipers’ lawyers are now requesting official impeachment testimony by letters not an in-person appearance. If this is accurate such a request speaks directly to the abject stupidity of the claim . . .

"Testimony by letters"? Althouse, "Lawyers for the CIA officer whose whistleblower complaint helped ignite an impeachment inquiry into President Trump have asked Congress whether their client could submit testimony in writing instead of appearing in person..."


. . . Safety is important, but what about our interest in assessing this person's credibility? I want to look the person in the face and hear the voice. Is the person's identity to be kept secret, so that there's no opportunity to consider bias and political motivation? Why are we bothering with this person at all when we have the transcript of the famous telephone call? If it's not to put a face on the accusation, do we even care?

Of course, I think the impeachment inquiry is all political theater. And theater isn't theater if the actors don't strut and fret their hour upon the stage. 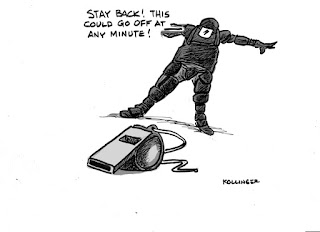 
Charles McCullough, an attorney who assisted Andrew Bakaj, a former staffer for Sens. Chuck Schumer and Hillary Clinton, at the beginning of the process was previously the inspector general of the intelligence community (ICIG) at the height of the Clinton email scandal.


A former CIA official who exposed waterboarding practices on war on terror detainees isn't a fan of the anonymous whistleblower in the Ukraine case undergirding the impeachment inquiry of President Trump.
“I don't think he's a whistleblower. I think he's an anonymous source and there's a big difference," said John Kiriakou, who served two years in prison over the revelations from the Bush administration, becoming the first CIA officer to be convicted of disclosing classified information to a reporter.

"If this whistleblower were truly a whistleblower, he would be happy to testify in open session before the [House] Intelligence Committee or whatever other committee wanted his testimony," Kiriakou told the Washington Examiner. "He is not an undercover officer. Therefore there is no reason to hide his identity from the White House or further from the American people."

Breitbart, Sen. Graham Threatens to Call Volker to Testify If House Dems Fail to Release Deposition’s Transcripts. They clearly didn't get what they wanted out of it. Capt Ed, Zelensky: “This Is Not Corruption, It Was Just A Call”

CR, Hunter Biden invested in a Chinese tech company that was recently blacklisted for human rights concerns. Cocain's a hell of a drug. So is a rich, powerful father. Matt Margolis, PJ Media, Biden Spox: Hunter Was Cleared by Obama White House to Serve on Burisma Board. AllahPundit, Hot Air, Informal Trump Advisor: China Gave Me Some Information On Hunter Biden Last Week

Breitbart, Donald Trump Trolls Joe Biden on Corruption During His ‘Impeach’ Speech “So pathetic to see Sleepy Joe Biden, who with his son, Hunter, and to the detriment of the American Taxpayer, has ripped off at least two countries for millions of dollars, calling for my impeachment – and I did nothing wrong,” Trump wrote on Twitter."

Breitbart, Here Are the Giuliani-Ukraine Notes Few Have Seen


The five pages of typewritten, printed-out notes – not transcripts –together with the IG’s cover letter to lawmakers, were posted this week on a Ukrainian website, The Babel. They appear to memorialize two conversations: one on Jan. 23, when Giuliani spoke by phone with the former general prosecutor of Ukraine, Viktor Shokin; the other is from two days later, when Shokin’s successor, then-General Prosecutor Yuriy Lutsenko, met Giuliani in New York.

In addition to the fired Shokin's claim that President Poroshenko warned him not to investigate Burisma because it was not in the Bidens’ interest, the notes say, the prosecutor also said he “was warned to stop” by the then-U.S. Ambassador to Ukraine, Geoffrey R. Pyatt.

The State Department declined to explain this assertion about Pyatt, who was ambassador to Ukraine from 2013 to 2016 and now is Ambassador to Greece.

So it seems that the SDNY prosecutors have set Giuliani firmly in their sights. WSJ, Two Giuliani Associates Who Helped Him on Ukraine Charged With Campaign-Finance Violations. AllahPundit, Let’s Just Skip To The Part Where Rudy Is Indicted, Trump Pardons Him, And Democrats Impeach Him Over That

Was then-FBI chief Jim Comey spying on his boss, Attorney General Loretta Lynch? He apparently had a “highly placed informant” in her office reporting on her doings as of May 2016, which is pretty darn close to “spying” in most books.

We know: Comey famously considers it an “investigation,” not “spying,” when it’s official FBI business — but it’s hard to see how secretly monitoring the AG’s office could be official work for the Bureau.

Ace, New York Times Reporter Reveals That James Comey Had a Spy In Loretta Lynch's Office, and Knew That She Had Declared She Would Not Permit the Clinton Email Scandal to Go Very Far "Not that he mentioned this to the public, of course."


By the way, this same writer just admitted that there is a deep state -- but it's full of "patriotic people," by which he means "liberals who will illegally use government power to thwart Deplorables and their constitutionally-empowered elected officials."

AllahPundit, Trump: Have I Mentioned Lately That Jeff Sessions Was A Total Disaster And An Embarrassment To His State?

Russian trolls at the Internet Research Agency (IRA) were instrumental in stirring up strife inside the U.S. following the election, according to the report, which focuses on social media disinformation. IRA operatives flooded social media with hashtags promoting resistance, the report notes.

In The Mailbox: 10.10.19 : The Other McCain
Democrats have abandoned Clinton impeachment's bipartisan format
Impeachment: The Democrats' chosen recourse to overturn 2016 election - Washington Times
Devin Nunes Discusses Partisan Impeachment, Ukraine and State Dept Involvement…. | The Last Refuge
WATCH: Rep. Lee Zeldin DESTROYS the media for playing Adam Schiff’s game – The Right Scoop
The Bluffpeachment
Another Day, Another Phony “Subpoena” Impeachment Narrative – Rick Perry Edition… | The Last Refuge
Doug Collins: “Impeachment Inquiry Will Backfire”…. | The Last Refuge
Democrats Enter Robespierre Phase Of Impeachment
There is No Middle Ground with Today’s Democrats or the Deep State – American Greatness
Althouse: "He took my really – believe it or not – congenial and gentle words and he made me sound like a tyrant."
We Now Have a Genuine Constitutional Crisis | The American Spectator
Posted by Fritz at 10:21 AM