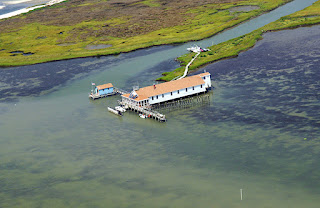 An environmental group says sea-level rise and erosion are bringing an end to the use of an education center on an island in the Chesapeake Bay.

The Capital Gazette reports the Chesapeake Bay Foundation recently announced that this fall is the last season for its Fox Island Education Program.

Educators with the foundation say sea level rise and erosion are destroying the protective salt marshes surrounding the island located in Virginia waters between the Tangier and Pocomoke sounds.

They say that’s making the educational center that served teachers and students unsafe.

The foundation says in a blog post that more than 70 percent of the island’s land area has washed away over the past 50 years.

It calls the center’s closure an example of the “real and immediate threat” climate change poses.

What they won't tell you, of course, is that sea level at that site, as well as at all monitored sites around the Chesapeake  Bay, has been taking place at the same rate (with minor site to site differences) since we started monitoring it  in the early 20th century.

They're losing the use of the island to sea level rise and erosion that could have been predicted the day they bought the old hunting lodge. And if they really valued the island, they could build sea walls, and bring in fill. I'm sure the Port of Baltimore would be more than happy to sell them some dredge spoils from Baltimore Harbor.