No Rest From Russiagate

Oh what has become of the "whistleblower"? Even Reuters is noticing One person is missing in the Democrats' impeachment inquiry: the whistleblower. Why? Brent Bozell and Tim Graham on  The Incredible Vanishing Whistleblower at Red State.

There's an obvious reason why they have obscured this alleged hero's identity. It was reported that he worked with Joe Biden in the White House on Ukraine issues. A story worth explaining? The whole scheme began to look like a Democratic plot. And suddenly, the incessant pro-impeachment media went dark on their central figure.

His testimony was no longer the piece de Resistance. Pardon the pun.

Even some of the liberal "fact-checkers" felt pressed to admit Schiff lied when he claimed on national TV that he and his staff never met with this whistleblower. Clearly, he doesn't want any more questions about how coordinated this impeachment plot is. A GOP source told the Examiner, "At some point, both Schiff and the whistleblower came to the conclusion that his personal testimony stands to do more harm than good to both of them."

And speaking of heresay testimony, REVEALED: Latest Dem Impeachment ‘Witness’ Fiona Hill WAS NOT EVEN WORKING IN WHITE HOUSE at Time of Trump Call – But was Very Upset with Call – Huh? (Gateway Pundit)


According to reports Ms. Hill was not even working in the White House at the time of the call with the Ukrainian president on July 25th. Hill resigned before the call. So it’s not clear why they needed to speak with her for 11 hours. Hill had ZERO knowledge of the call, and only heard rumors. Democrats don’t care. They want to impeach Trump on rumors.

Victory Girls,  DNC Chair Tom Perez Cheers For The Deep State Whistleblowers, as if we needed any more proof it was strictly a partisan affairs.

Starting our Ukrainian section, From Da Fed, Top Diplomat Testified That Obama Admin, Not International Community, Orchestrated Ukraine Prosecutor’s Firing. So much for Slow Joe's alibi.   Ace responds Top Diplomat Testifies To Congress that the Obama/Biden Administration -- Not The "International Community" or EU -- Pushed for and Engineered the Ouster of The Prosecutor Targeting Hunter Biden's Company


Biden and his defenders, by which I mean the media and NeverTrump fake conservatives, have long contended that this couldn't have been corrupt, because the international community wanted it.

And apparently anything the international community wants is non-corrupt.


This relates to Kurt Volker’s testimony, which turned out to be a major dud for Schiff and his gang. While Volker, being a former John McCain staffer, was expected to come in and fillet Trump, it turned out that he didn’t have much to add to the impeachment fury. Trump, for whatever problems one might have with him talking about Biden in the first place, simply didn’t engage in a quid pro quo, threaten aid, or pressure the Ukrainians.

As I wrote at the time, it was reported that Schiff got so frustrated with how things were going that he sidelined his MSNBC lawyer to question Volker himself. Now, we know why he did that and we’ve got the transcript to illustrate what happened. . . .
. . .
This per the Washington Examiner.


Democrat House Intelligence Committee Chairman Adam Schiff reportedly pressed U.S. special representative to Ukraine Kurt Volker in a secret meeting on October 3 to say that President Donald Trump pressured Ukrainian officials to investigate former Vice President and current Democrat presidential candidate Joe Biden and his son, Hunter Biden.
“Volker denied that was the case, noting that Ukrainian leaders did not even know the aid was being withheld, and that they believed their relationship with the United States was moving along satisfactorily, without them having done anything Trump mentioned in his notorious July 25 phone conversation with Ukrainian President Volodymyr Zelensky,” The Washington Examiner reported. “When Volker repeatedly declined to agree to Schiff’s characterization of events, Schiff said, ‘Ambassador, you’re making this much more complicated than it has to be.’”

Well, he could have just lied about what the witness said, again. Via the Wombat's  In The Mailbox: 10.16.19, Weasel Zippers: Schiff Pressed Volker To Say Ukraine Felt Pressure From Trump,


Wow. How improper is this? If he’s trying to shape his testimony, he’s potentially suborning perjury. Why is he having a secret interview with him at all? That’s tainting the witness and now Schiff really should recuse himself because he’s shown he can’t conduct an impartial investigation and has become a part of it.

The NYT (cited by MSN) whines that Former Top State Dept. Aide Tells Impeachment Investigators He Quit Over Ukraine. Apparently he quit over the ouster of Amb. Yovanovich saying, “I was disturbed by the implication that foreign governments were being approached to procure negative information on political opponents,” , which is pretty rich considering that Amb. Yovanovich seems to have been carrying out a surveillance program against American media and politicians she considered opponents. Also at NYT via Hot Air, Ex-Aide (Fiona Hill) Saw Gordon Sondland As A Potential National Security Risk. More likely a threat to continued use of Ukraine as a cash cow for sons of Democratic politicians. 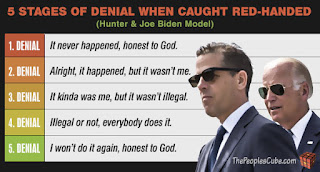 So did you hear Hunter Biden gave an interview to ABC news? The fallout continues. At the Lat Tradition, Drug Addict Hunter Biden sobers long to give softball interview by Fake News ABC. That's one way to characterize it. Twitchy, ABC News posts ‘blatantly incorrect’ transcript of portion of Hunter Biden interview. Looks like a mishearing to me, but I generally prefer to assume stupidity over evil. WaFreeBe, FLASHBACK: Hunter Biden’s One Qualification for Amtrak Board Was Taking Trains. Hey, I'm qualified to sit on the board of United Airlines, too! 5 stages of denial when caught red-handed (the Biden model). Jonathon Turley, on Da Hill, Why more questions remain after Hunter Biden's interview


Hunter Biden’s deals are textbook examples of how political families become rich from public service. Still, many in the media continue to repeat Joe Biden’s position that “no one has asserted my son did a single thing wrong.” That, of course, is untrue. Even if the deals did not amount to crimes, they were wrong. They have always been wrong, but both parties have always protected these deals as a dirty little secret.

Hunter Biden appeared to struggle to find his identity in explaining his foreign deals. He was asked why he accompanied his father on an official trip to China in 2013, shortly before he signed a deal with the Bank of China to manage $1.5 billion in investments. He replied, “I have traveled everywhere with my dad.” The problem is he was 43 years old at the time. He was definitely not some oversized lap child.
. . .
Within a couple years of graduating, Hunter Biden amazingly ascended to the position of executive vice president. He was then given a position in the Commerce Department before he became an industry lobbyist. In 2006, President Bush made him a member of the board of directors of Amtrak. No one seriously argued at the time that his resume even remotely qualified him for that position, any more than his assuming the board chairmanship of the United Nations World Food Program.

At the time, Democratic Senator Tom Carper of Delaware explained that Hunter Biden was qualified to get on the board of Amtrak because “Hunter Biden has spent a lot of time on Amtrak trains.” He was then given a position with the law firm of Boies Schiller Flexner while establishing an investment firm. Frankly, his entire resume is filled with high paying positions but few known accomplishments to justify them.

Paul Bedard, WaEx, Stephen Miller: Joe Biden ‘neck deep’ in Ukraine corruption with son Hunter. They might actually be in over their head, if anyone will investigate. John Hinderacker at Power Line, Biden in Decline.


Joe Biden didn’t do anything wrong? A time-honored method of taking bribes is having them paid to a family member, usually in exchange for nominal or nonexistent services. It is comical to watch “reporters” pretend not to understand this.


According to the NYT (take with the usual salt tablet), White House Is Said To Open Internal Review Of Ukraine Call. The WaPoo whines that White House directed ‘three amigos’ to run Ukraine policy, senior State department official tells House investigators, not that Democrat Party aligned Deep State agents that they would prefer. And speaking of the Deep State, Federal investigation of Rudy Giuliani includes counterintelligence probe (CNN). If they don't open a counterintelligence probe against you, you aren't trying hard enough. Also, Giuliani role unnerves some congressional Republicans. Same comment. WaPoo reports Giuliani pressed Trump to eject Muslim cleric from U.S., a top priority of Turkish president, former officials say. To say I'm skeptical of WaPoo unnamed sources is an understatement, and I know little about the Erdogan/Gulan matter, but it would make me queasy to turn anyone over to Erdogan. He is clearly not our friend and ally.

Ace Panic? Fusion GPS Releasing Its Own Book, Defending Its Coup, Plus: Whoa

Fusion GPS founders are releasing a book Nov. 26 defending their investigation of Trump and the Steele dossier. Jeffrey Toobin is already on board with an endorsement.
https://t.co/rKrO1Hk3AI
— Chuck Ross (@ChuckRossDC) October 14, 2019


"If we determine that they contain information that is discoverable or that is relevant to sentencing, we will produce them to you."

I'd prefer someone neutral make that judgement.

The Resurgent? Democrats Defy House Precedents on Impeachment. To be fair, the precedents are few and dated. But we'll remember when the time comes for President Biden Warren's impeachment.