A very interesting piece from sundance at CTH, Wait, What… DOJ Has Possession of Joseph Mifsud Cell Phones (Blackberries)?…

Apparently, according to the information within the filing, the DOJ has somehow gained custody of two cell phones belonging to Mr. Mifsud: (Source Link)

The filing notes that “western intelligence” likely tasked Mr. Mifsud against General Flynn as early as 2014 in order to set up “connections with certain Russians” for later use against him. Essentially, an intelligence entrapment scheme. Unfortunately the filing only identifies the cell phones along with the request for production of the content therein. However, the fact the DOJ has two cell phones belonging to Joseph Mifsud opens up a whole bunch of questions:

#1) How did the US Dept of Justice gain custody of Mr. Mifsud’s cell phones?
#2) Were these Blackberry cell phones issued by U.S. intelligence? (unknown agency)
#3) Why has the U.S. DOJ taken custody of those cell phones?
#4) If #2 is yes, wouldn’t that automatically destroy the “Mifsud as a Russian intelligence asset” narrative?
#5) [Less important] How the heck did Sidney Powell find out about them?
Something is certainly happening here.

Now, my aging (and full) memory is less than perfect, but I don't recall the Mysterious Mr. Mifsud playing any role in the Michael Flynn case, and a quick Google search seems to confirm that. Why does Ms. Powell think Mifsud's phones can cast light on his sentencing; or does she suspect (or have inside knowledge) that his phones may show a conspiracy by western intelligence to frame Flynn and/or Papadopuolos? More on the story at WaEx by Dan Chaitin and Jerry Dunleavy, DOJ obtained devices belonging to Clinton 'dirt' tipster Joseph Mifsud, Flynn lawyers say. 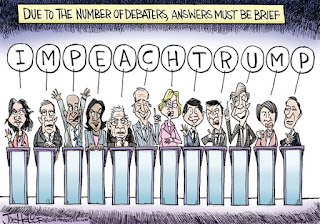 From The Right Scoop, Fusion GPS founder reveals Steele dossier memos made it all the way to “President Obama”. Well, we know that Peter Strzok said that the Preznit wanted to know what was happening.

George Parry at AmSpec, SPECIAL REPORT - CrowdStrike and the Impeachment Frenzy. Remember, the favor that Trump asked President ZZ Top was help finding the CrowdStrike servers, not to investigate Joe Biden (although every news report reports it that way). This article is a good reminder of the facts behind the DNC hack, which are quite different than the story generally told in the media. Chuck Ross at Da Caller, The FISA Abuse Report Is Coming Out Soon. Here’s What To Know About It


No one knows who the members of this “deep state” shadow organization are for sure, and no one is naming names. Regardless, it seems to hound the president at every turn.

Doesn’t this lament seem somewhat incongruous coming from a political party that controls half of Congress, the White House, and has appointed a majority of the Supreme Court? How is it that the president’s camp can wield such potent levers of political power and at the same time consider itself besieged by shadowy players?

The answer is more banal than nefarious. The “deep state” is hiding in plain sight. It is not a clandestine group, rather it’s is a prevailing attitude.

Say, did you watch Hunter Biden's interview with ABC? I didn't, but it sure has generated a lot of buzz. Althouse has 3! posts, Hunter Biden takes an emotional roller coaster ride on "Good Morning America" "I'm seeing dishonesty, pain, anger, fear, anxiety", "Feels to me like living in some kind of Alice in Wonderland where you're up on the real world, then you fall down the rabbit hole and the president is the Cheshire cat asking you questions about crazy things that don't have any resemblance to the reality of anything that has to do with me." "Said Hunter Biden, deflecting questions about his foreign business dealings", and But even the son of the vice president of the United States sometimes must have to stand naked.... Yeah, I got that last allusion.

Sundance, Beyond Obtuse – ABC’s Heavily Edited and Shaped Interview With Hunter Biden…. Why would we expect different? Victory Girls, Hunter Dumps Cold Water On Dad’s Story. Capt. Ed at Hot Air, Hunter Biden: Why No, I Have No Regrets Over My Overseas Work, Why Do You Ask? Update: What Was Hunter’s Amtrak Qualification Again?. I wouldn't regret having foreign countries throw money at me for nothing either. It's up to Dad not to yield to the obvious attempts to curry his favor. Da Fed, Anderson Cooper Casually Vindicates Hunter Biden by referring to the charges of corruption as false. Ace, Democrat Debate Thread Plus: Joe Biden Has Ordered the Media and His Rivals Not To Bring Up the Name "Graft Hunter." Will His Opponents Be Sniveling Little Bitches and Comply?.

Insty remembers the good old days when the media worried about corruption, PAST PERFORMANCE IS NO GUARANTEE OF FUTURE RESULTS:


● Shot: “Back in 2008 when Biden was running for President in the primary against Barack Obama and media wasn’t particularly concerned about having to protect Biden to help his viability against President Donald Trump, [NBC’s] Tom Brokaw asked a very blunt and direct question about the conflicts Biden had with his son’s work.”
—“Watch: Tom Brokaw Nailed Joe Biden About Conflicts Concerning His Son in 2008,” Nick Arama, Red State, today.

Apparently Reuters is shocked that Giuliani Was Paid $500,000 To Consult On Indicted Associate’s Firm. That's kind of a lawyers job, to help people with legal troubles. ABC, Pence, Giuliani defy demands by Congress for documents. You mean demands by Nancy Pelosi?

Capt. Ed wonders if the next witness is the 'Stache, Is Bolton The Next Big Witness In Ukraine-Gate? also Giuliani Lobs Back At Bolton: If I’m A Grenade, He’s “An Atomic Bomb”


Here's something I wrote on October 11th, when the news was about the whistleblower's request testify to Congress in writing and not in person in order to protect his personal safety:


Safety is important, but what about our interest in assessing this person's credibility? I want to look the person in the face and hear the voice. Is the person's identity to be kept secret, so that there's no opportunity to consider bias and political motivation? Why are we bothering with this person at all when we have the transcript of the famous telephone call? If it's not to put a face on the accusation, do we even care?

Now the Democrats seem to have arrived at my question why are we bothering with this person at all when we have the transcript. But Trump gives the reason to bother. The credibility of the whistleblower is an issue that he likes and that the Democrats say is nothing.

Sundance, Meadows, Zeldin and Jordan: “‘whistleblower’ has right to protection, no right to anonymity”…

In impeachment follies, Nanny Botox announces No House vote on impeachment at this time. Still protecting her red state democrats (CNN). Sundance, Fraud Continues – Nancy Pelosi Promises House Impeachment Subpoenas Will Not Have Legal Penalties – House Will Not Authorize Impeachment Inquiry… The good news is that means their subpoenas are basically "pretty please", but the bad news is that Republicans can't call any witnesses in defense. Leading to NYPo editors asking What are the Democrats hiding about impeachment inquiry? (nearly everything), and Mark Levin commenting ‘We have mass murderers and terrorists who get more process’ than Donald Trump has on impeachment and Levin gives an in-depth history lesson on impeachment that Dems and the media won’t want you to see. 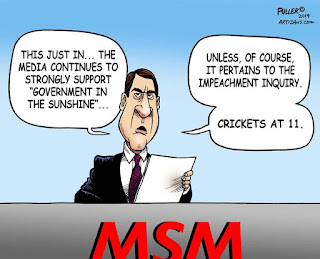 CNS News, Schiff Sees Two 'Quid Pro Quos' in Trump's Call With Ukraine President, but then he has a vivid imagination seeing multiple acts of collusion that Robert Mueller couldn't find with 50 some FBI agents and $30 million.

Liz Shield's Morning Greatness (AmGreat), Media Prints Useful Leaks from Clandestine ‘Impeachment’ Inquiry Testimony, which is really what it's all about at this point. At CNN Robert Brownstein claims Impeachment could lead to a first in the 2020 election. What, the first overthrow of a duly elected President by a media-deep state cabal?


As impeachment proceeds, the division in the country "is going to go into the stratosphere," predicts Charles Coughlin, a veteran Republican political strategist based in Phoenix. "Which I think creates an opportunity for a candidate ... to fill that narrative: We have to start talking about what brings us together and not what pushes us apart. I think there will be giant pieces of room in the electorate, both Republican and Democratic, to articulate that notion."

And lastly, the Wombat delivers with In The Mailbox: 10.15.19, JustOneMinute: Tell Us What You Really Think, John Bolton and the sometimes sensible Megan McArdle: It’s Democratic Voters, Not Candidates, Who Might Want To Reassess, Louder With Crowder: Project Veritas Confirms CNN Only Cares About Impeaching Trump and Don Surber: Hunter Becomes The Prey
Posted by Fritz at 9:07 AM