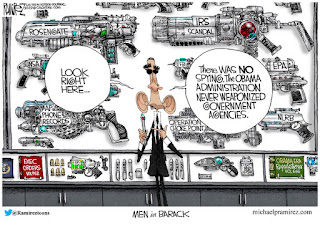 A really, really big shew on the "Spygate" front, and Ace was there collecting the news and links First, Secret Court Rules That FBI Violated Americans' Rights in Using Raw Intelligence Database for Unlawful Purposes

Although this isn't about unmasking per se. (At least, I don't think it is, but it seems related.)

It's about illegally querying databases of raw intelligence for purposes other than their narrowly-prescribed uses (to investigate crime or foreign intelligence operations).

The FBI was just querying the database, about Americans, when it felt that it would be a nice shortcut. 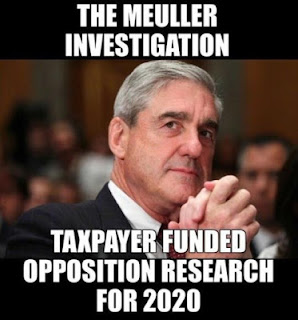 Administration Officials: Robert Mueller Lied Under Oath to Congress; Despite His Denials, He Was Interviewing for FBI Job, and Was Turned Down


Such straight arrow, so many integrity.

EXCLUSIVE – Multiple administration officials tell Fox News that when Robert Mueller met with President Trump in May of 2017, Mueller was indeed pursuing the open post as the director of the FBI – something the former Russia probe special counsel denied under oath during congressional testimony this summer.
These officials also told Fox News government documents showed Mueller was pursuing the job as a candidate himself.
It came as emails released this month through a Freedom of Information Act request by the conservative group Judicial Watch seemed to indicate Mueller knew there was a real possibility he could be named special 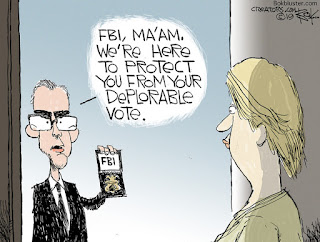 Remember That FBI Employee Who Lied to the IG About Gifts He Had Taken From CNN, and Then Quietly Resigned...? - Yeah It Turns Out That Was James Comey's Spokesman


An FBI senior official who resigned under mysterious circumstances last year accepted baseball game tickets from a CNN reporter in 2016 and lied about it to investigators, according to a report obtained exclusively by the Daily Caller News Foundation.
Michael Kortan accepted the tickets from the CNN journalist to at least two games, in May 2016 and September 2016.
Kortan displayed a "lack of candor" during multiple interviews about the tickets. He was prohibited under FBI policy from accepting gifts from reporters who cover the bureau.
He also accepted tickets from a New York Times reporter.
The FBI's top press officer during the Hillary Clinton and Trump-Russia investigations accepted tickets to a Washington Nationals game from a CNN correspondent and lied about it repeatedly during interviews with the Justice Department's inspector general, according to a report obtained by the Daily Caller News Foundation. 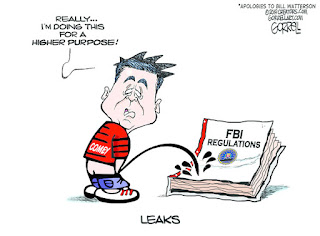 Even Hot Air got that one, too, Capt. Ed, Corruption, Cont’d: Comey Spox Got Gifts From CNN And NYT, Lied To Investigators


The OIG referred this to the Department of Justice for potential prosecution, which was apparently declined. One can understand why William Barr might have decided against it without an established quid pro quo. However, that might trip up attempts to prosecute McCabe later, and perhaps even call into question the obstruction cases Robert Mueller built against George Papadopoulos and Michael Flynn. After all, the quid pro quo in those cases looks pretty murky in retrospect, no?


The female FBI lawyer who was caught sending anti-Donald Trump texts lied about her relationship with FBI agent Peter Strzok when the director of the bureau confronted her, a new book exclusively obtained by DailyMail.com reveals.

Lisa Page told Andrew McCabe that she and Strzok were not an item and had never been romantically involved.

Page was 'acutely embarrassed, mortified' that her affair was public but chose to lie rather than tell the truth, writes James B. Stewart in his new book Deep State: Trump, the FBI, and the Rule of Law, out today.

When their relationship did become public, so did the texts they exchanged mocking Trump and his supporters, with the two becoming a symbol of the so-called Deep State that was out to get the President.

No charges filed here, yet either. It's a pattern. Elizabeth Vaughn, Red State, BIG: James Clapper Admits He Was Following Orders From His ‘Commander-In-Chief, President Obama’ 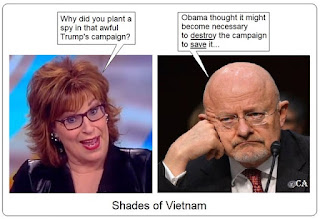 Clapper makes these statements in such a deadpan voice, we don’t realize at first the gravity of his words. But this is the first time a deep state insider has connected Obama to this travesty.

Rush Limbaugh was over the moon as he read this transcript to his listeners on Monday. He said:


I’ve been waiting for this. A lot of people have been waiting for this. Here’s Clapper saying, “I didn’t do anything wrong! We didn’t do anything wrong, ’cause we were doing what Obama told us to do.” The question he was asked is (summarized), “Are you worried about this investigation that Barr and he’s team’s running against you? Are you worried? You, Clapper and Brennan, are you guys worried?” (muttering) “Oh, no. Of course not. Why? (muttering) The president told us to do all that! (muttering) Obama was the president of the United States. Uhhh, the chief executive, uh, commander-in-chief told us to do all that.”
Really? Folks, can you say in any other time and place “bombshell”?

In a text message dated September 2, 2016, from former FBI lawyer Lisa Page to fired FBI official Peter Strzok, she wrote: “potus wants to know everything we’re doing.” The two were putting together a list of talking points for then-FBI Director James Comey who was scheduled to meet with Obama.

Althouse notes how Attkisson notes the incoherence of the Democrats' position.

This is news? Stacy McCain ‘Chuck Todd Is a Disgrace’


During an interview Sunday on Meet the Press, NBC’s Chuck Todd interrupted Republican Sen. Ron Johnson of Wisconsin, accusing Johnson of promoting “Fox News conspiracy propaganda stuff.” What Johnson had been trying to explain, of course, was how the investigation of Ukraine-connected corruption is related to the origin of the “Russian collusion” hoax the Obama administration perpetrated against Trump.
. . .
Chuck Todd is, and always has been, a partisan Democrat (just like ABC’s George Stephanopoulos). Todd began his political career working on the 1992 presidential primary campaign of Tom Harkin. No one has ever accused Chuck Todd of being an objective journalist, and his fellow partisan operatives in the media celebrated Todd’s interview with Johnson as a triumph of their (Democrat) cause. It’s disgusting.

Jake Tapper simply relayed the silly spin from frequent liar Adam Schiff "without evidence," as he likes to say about Trump?
I shan't believe it. I simply shannot. Byron York . . . 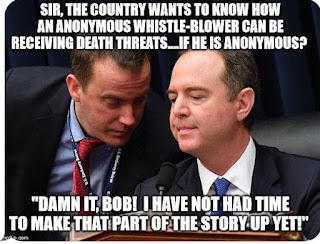 Even AllahPundit deigns to report it, But if you waded through my links you saw it several days ago.


An intriguing scoop, although the fact that this vague clue to the guy’s identity is being leaked by Republicans to Byron York helps explain why Dems are convinced the whistleblower will be outed in a nanosecond after he testifies unless his identity is concealed somehow.

Via the Wombat's In The Mailbox: 10.08.19, Weasel Zippers has Fox Confirms “Whistleblower” Didn’t Inform IG About Contacts With Schiff Or Prior Working Relationship With Dem Politician 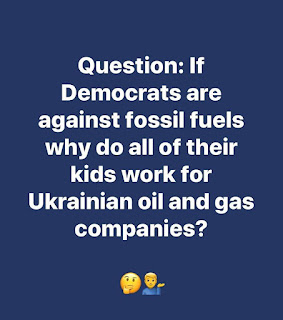 A little minor breaking news on the Biden-Ukrain matter, WaEx, Joe Biden, Hunter Biden could be forced to testify in Donald Trump Senate impeachment trial. That should prove amusing; but how about Joe's bro, Jim? Joe Biden Implicated In Massive Fraud Case Against His Brother and Hedge Fund Partner


McMinnville businessman Michael Frey is accusing Biden’s brother of using the former vice president’s name to con him in what Frey describes in a U.S. District Court lawsuit as a scheme to steal away his rural health care business model.


Graham apparently wants to show up the House in demonstrating that the Senate can run a more balanced and proper investigation. Given the fire-drill circus in the lower chamber under Adam Schiff’s direction, that’s almost a gimme, isn’t it? Graham’s also likely hoping that he can get Giuliani’s information about Ukraine and corruption into the headlines to compete with the Democrats’ narrative, which has dominated thus far over the past couple of weeks on Ukraine-Gate. If Graham can keep Giuliani focused and disciplined, that might be well worth the risk of opening Senate hearings on Ukraine, but … that’s not just a mighty big if, it looks more like The Impossible Dream.
. . .


In response to a request for comment on Graham’s announcement, Giuliani told CNN, “Love Lindsey, but I am still a lawyer and I will have to deal with privilege.”
But Giuliani added, “Given the nature of his invitation about my concerns I might be able to do it without discussing privileged information.”

Also from Capt. Ed, Hmmm: State Dept Orders EU Ambassador Not To Testify On Ukraine-Gate; Trump: “Kangaroo Court”, and CNN whines about Inside the White House's effort to contain Ukraine call fallout. It's no fair for the Donald to defend himself. More Capt. Ed, Schiff: Preventing Sondland From Testifying Is Strong Evidence Of Obstruction; Update: Dems To Subpoena Sondland.Is it really a subpoena or one of those demands that looks like a subpoena but isn't? AllahPundit, White House Lawyer Sends Letter To Dems: We Cannot Cooperate With Your Very Unfair Impeachment Probe. Axios whines Conservative news goes to war over impeachment. How dare the deplorable protect the person that they helped elect!

Allah, Report: Romney Refusing Requests To Primary Trump — But Could Try To Bring Him Down Via Impeachment. This is not my shocked face.
Posted by Fritz at 7:56 AM