Reason #6407 that Trump was Elected

Democrats are wrong. Middle-class incomes surging – thanks to Trump policies No, Democrats aren't so much wrong as lying.


The latest Census Bureau Current Population Survey data now show that middle-class incomes, after adjusting for inflation, have surged by $5,003 since Donald Trump became president in January 2017. Median household income has now reached $65,976 – an all-time high and up more than 8 percent in 2019 dollars under the Trump presidency.

This data was compiled by the statisticians at Sentier Research, an economic research group whose founders have more than 30 years of experience at the Census Bureau in analyzing the monthly income numbers. 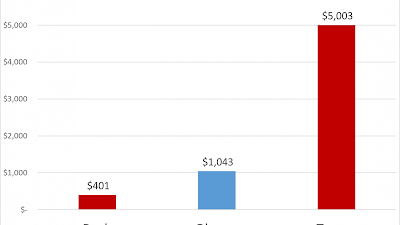 And lest you think this is just a continuation of the slow improvement after the recession under Obama: 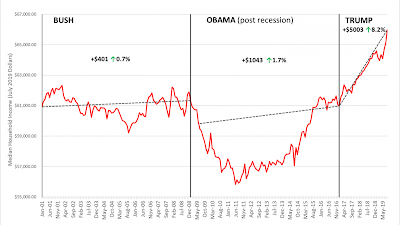 These income numbers are PRE-TAX, so they do NOT include the impact of the Trump tax cut. The Heritage Foundation estimates that the average household has saved $1,400 a year on their federal taxes from the 2017 Trump tax cut. This means many working-class families now have a $6,000 higher after-tax, and after-inflation paycheck today.
These surges in income, especially in the last several months, have occurred at exactly the time when many liberal economists and media talking heads were shouting “recession.” In reality middle-class families were enjoying a near-unprecedented income windfall and “the gains in income levels in recent months,” Sentier reports, “have been accelerating.“

No wonder all they can talk about is Ukraine.
Posted by Fritz at 9:18 AM