I Don't See This as Bad News


Hopefully, by now you’ve weighed in on what path you think we should take to restore rockfish. If not, you have until Monday (5 p.m.) to chime in. Details are in the Outdoors Calendar listed below.

That said, debates and concerns about rockfish health have been somewhat tempered by good news about the excellent fishing for red drum, cobia, speckled trout and Spanish mackerel. Anglers tell the Department of Natural Resources they’re catching some Spanish mackerel even as far north as Man O’ War shoals. At the end of August, a buddy caught not one but three quality speckled trout inside Hodges Bar near Rock Hall. On the fly, no less.

Man O' War shoals is just outside Baltimore Harbor, while Rock Hall is way up the Bay, above the Bay Bridge, and on the Eastern Shore.


Most experts — guides and charter boat who spend most days fishing — believe the influx of cobia (and to perhaps lesser extent red drum) further north has been driven in large part by higher salinity due to lack of rain in combination with high water temperatures. From Punch Island Bar to Southwest Middle Grounds and spots in between the fishing has been good.

I’m particularly intrigued by the push of cobia into northern waters. Friends who fish New Jersey and Delaware waters tell me they’re seeing and catching more cobia. These anecdotal reports are supported by observations of the professional fisheries scientists, another signal that this prized gamefish may be expanding their range northward.


I and others wonder if the range bump is also being driven by an increase in cobia biomass, which is kind of a technical way of saying since there’s more of these fish they’re natural tendency may be to seek out more food in new territory.

Marty Gary, a longtime DNR fisheries staffer who now is at the helm of the Potomac River Fisheries Commission, told me the other day that years ago he looked at the writings of Tom McNally, the Outdoors Editor at The Evening Sun from 1950-56. 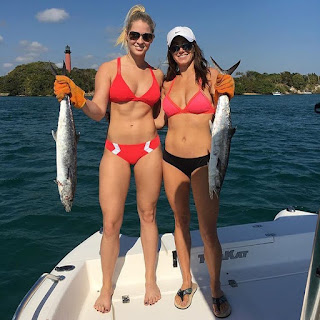 McNally preceded the late Bill Burton at that paper. Years back, Burton told me they’d catch cobia while chumming for bluefish at spots like Davidson Wreck and Mud Leads. Gary recalls that while he read an occasional mention of cobia in McNally’s articles, it was nothing like the quality fishery we’ve seen the past two years.

There’s more to learn for sure about cobia’s habitats, as is the case with lots of game fish. This is important work if we’re to maintain a quality fishery. In the meantime, enjoy it, but with an eye to the future.

You might remember that in the last few weeks, I have caught 3 of the 4 exotic species listed, Red Drum, Speckled Trout and Spanish Mackerel. I'd dearly love to catch a Cobia. Maybe next year.

The Wombat has Rule 5 Sunday: Revolution Calling up and awaiting your digital pleasure.
Posted by Fritz at 6:49 PM