The news du jour is, of course, the Nancy Pelosi has either decided to do away with the impeachment inquiry or go forward,  Democrats Move Toward Bringing Impeachment Inquiry Public (MSN quoting NYT).

By the afternoon, Speaker Nancy Pelosi added to that sense of urgency, announcing that after weeks of private fact-finding, the full House would vote on Thursday to initiate a public phase of the inquiry. That vote would establish rules for the public presentation of evidence and outline due process rights for Mr. Trump. 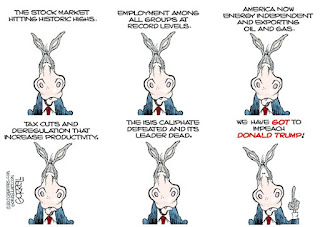 She may not know everything, but no one doubts Nancy's ability to count votes. Is she counting on winning or losing? Althouse: Maybe they hope it will be voted down! Suddenly, House Democrats want a formal vote on impeachment.


My first thought was, the Democrats are in trouble, they know the impeachment inquiry is dragging them down, and they want the vote to fail. But here's how Nancy Pelosi put it:


We are taking this step to eliminate any doubt as to whether the Trump administration may withhold documents, prevent witness testimony, disregard duly authorized subpoenas, or continue obstructing the House of Representatives."

In other words, the procedural arguments are damaging and distracting, and they want to knock them out of the picture.


Very nice trick here by the Lawfare advisory and rules committee that is handling the construct of the “Official House Inquiry” on impeachment. It is such a good trick it has everyone crossed-up and confused. Likely, that is by design . . . Note in this video, Pelosi is careful to say “this is not an impeachment resolution”. . .

From the never-ever-Trumpers at Da Bulwark, Impeachment Is a Product, and they are the ad campaign for the product. USA Today, Elizabeth Drew You don't have to break a law to be impeached.  True, but then you need to be able to explain yourself to the people who's votes you overturned. Also, in his part time gig at USA Today, Insty asks Should Trump get a third term if he's impeached and acquitted? Hmmmmm ... The constitution is not yet that malleable. Or is it?


Mattox’s proposal sounds radical, but actually, he’s a piker: He wants to accomplish this shift via a constitutional amendment. How old-fashioned. Doesn’t he know that the Constitution is a living thing, made to grow and change with the times? Over the past century, we have made dramatic changes in the extent of federal power, the redistricting of state legislatures, the constitutionalization of abortion and contraception and gay marriage, and much, much more, all without the tedious necessity of an actual amendment to the Constitution.

NewsMax hopes Trump's Vindication May Lead to Restoration of the Constitution. Would that it were so easy. From Breitbart, Adam Schiff whines  to Republican Lawmakers: Where Is Your ‘Respect for the Rule of Law’, whatever he just wrote today. CR, Schiff: Exec branch staffers who defy impeachment subpoenas build ‘powerful case’ against Trump for obstruction, so we can impeach Obama at last? Doug Ross, DEAR ADAM SCHIFF: CNN Has a News Flash 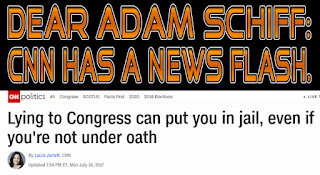 Mark Ellis at PJ Media, Matt Taibbi's Dire Dilemma: Is Trump Worse Than the Deep State? The Deep State is a longer lasting threat than a mere President.


On behalf of uncounted thousands of readers who dumped Rolling Stone when Jann Wenner’s periodical became more interested in promoting Blue State hegemony than covering Blue Oyster Cult, we can only say that Taibbi is half-right, which is 50% more correct than most leftists.


But suppose he did deliver. What would it mean if either or both of these things could be proved and a conviction secured? For Trump, it is easy to imagine an entire year on the campaign trail spent denouncing the numberless iniquities of some rando FBI agent, who will be presented as if he were the Palpatine-like mastermind behind a vast and rather sinister conspiracy to undermine the administration and the republic itself. He will spend 20 minutes rehearsing the details in Ohio and Pennsylvania; the crowds will shout "TREASON! TREASON!" or "LOCK THEM UP!" or "COMPLYING WITH FEDERAL INVESTIGATIONS IS A CONSTITUTIONAL DUTY, YOU GODLESS COMMIES!" or some such. A splendid time for all, I'm sure.

Meanwhile, Democrats will be able to follow the template established for them by Republicans in recent months. These, we will be told, are insignificant crimes in themselves, ones that would not have been prosecuted in the first place if their opponents were not grossly abusing their authority by carrying out a pointless investigation of things that happened four years ago now. Who cares what a few meaningless bunglers were or were not getting up to? All of this is a distraction from the real issue, which is the unspeakable corruption of Trump and his cronies, who are using the present inquiry as a smokescreen.

Springer's Blog, The Deep State...The Pleiadians Can Fix It 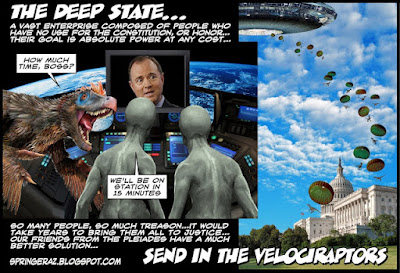 Well, that's one plan. More seriously, At AmSpec, E Donald Edmonson is thinking about How James Comey’s Revenge Is Changing Our Constitution


Like it or not, a powerful norm has developed in Washington that some matters must be left to the career staff — the so-called “administrative state” — the self-perpetuating bureaucracy of Platonic Guardians who see themselves as above politics and believe that they are really running the country.

Temporary occupants of political office offend the careerists at their peril. That’s what Chuck Schumer was trying to tell him when he warned an incoming President Trump, a Washington outsider who doesn’t know the unwritten rules, against offending the intelligence community: “Let me tell you: You take on the intelligence community — they have six ways from Sunday at getting back at you.”

And from Jed Babbin at AmSpec, Clapper's Nuremberg Defense


On October 7, Clapper made it clear that he was following Obama’s orders in conducting the spy op on Trump and his campaign. Asked if he was concerned that Durham’s investigation would uncover wrongdoing by intelligence officials such as himself, Clapper offered a response that is worth quoting at length:


The message I’m getting from all this is, apparently what we were supposed to have done was to ignore the Russian interference, ignore the Russian meddling and the threat that it poses to us, and oh, by the way, blown off what the then commander in chief, President Obama, told us to do, which was to assemble all the reporting that we could that we had available to us and put it in one report that the president could pass on to the Congress and to the next administration. And while we’re at it, declassify as much as we possibly could to make it public, and that’s what we did.

Clearly, unmistakably, Clapper said that he and the other intelligence officials — meaning at least Comey and Brennan — were following Obama’s orders to spy on the Trump campaign and probably Trump himself.

The only possible basis for those orders was the “Steele dossier,” the opposition research document bought and paid for by the Hillary Clinton campaign. Clapper, Comey, or Brennan — or any combination of the three — used it as the basis to get orders from Obama to conduct the operation.

In all probability, they coordinated with Obama and kept him posted on the spy op through his national security adviser, Susan Rice, who is another probable target for Durham’s investigation. Her conversations with Obama — on which she (and Obama) will claim executive privilege — would prove very enlightening if he can get her testimony about them.

Brian C. Joondeph at AmThink, The Walls are Closing In — but Not on Trump. Well, maybe. . .

Newsmax, Why Is the Left So Incurious About Ukrainian Election Hacking?, Why do you have to ask, the answer is obvious. Foreign interference in our elections is OK, as long as it furthers their ambitions. WaPoo whines that Sen. Johnson, ally of Trump and Ukraine, surfaces in crucial episodes in the saga. You mean it's bad for a US Senator to be interested in foreign interference? Who knew? And the Peacock, White House told in May of Ukraine President Zelenskiy's concerns about Giuliani, Sondland "The White House was alerted earlier than previously reported that Giuliani's pressure campaign was rattling the new Ukrainian president, two sources say." Well, that's sort of what "pressure campaigns" are all about. Who knew investigating Ukrainian corruption was a bad thing.


Lt. Col. Alexander S. Vindman of the Army, the top Ukraine expert on the National Security Council, twice registered internal objections about how Mr. Trump and his inner circle were treating Ukraine, out of what he called a “sense of duty,” he plans to tell the inquiry, according to a draft of his opening statement obtained by The New York Times.

He will be the first White House official to testify who listened in on the July 25 telephone call between Mr. Trump and President Volodymyr Zelensky of Ukraine that is at the center of the impeachment inquiry, in which Mr. Trump asked Mr. Zelensky to investigate former Vice President Joseph R. Biden Jr.

“I did not think it was proper to demand that a foreign government investigate a U.S. citizen, and I was worried about the implications for the U.S. government’s support of Ukraine,” Colonel Vindman said in his statement. “I realized that if Ukraine pursued an investigation into the Bidens and Burisma it would likely be interpreted as a partisan play which would undoubtedly result in Ukraine losing the bipartisan support it has thus far maintained.”

I wonder if he was that concerned about the Obama administrations use of foreign assets to target Trump?
Posted by Fritz at 9:50 AM