According to Roger L. Simon at PJ Media Mifsud's Cellphones Mean Barr Investigation Heating Up. I hope so, but I've been disappointed before. Also, Susan Rice Declines to Comment on Unmasking, Origins of Russia Probe. No comment!


Far from the media-fed narrative of officials being physically shaken by the call, Kurt Volker told lawmakers no one had expressed any concern to him about it, or about later allegations that requests for Ukraine’s help in corruption investigations was improper.

While Volker was tasked with managing the relationship between the Trump administration and the new government in Ukraine, he only heard that the Biden family had been mentioned in the phone call when anti-Trump bureaucrats began leaking classified details of the phone conversation to media outlets in late August.

Volker testified October 3 for nearly 10 hours behind closed doors after resigning his unpaid post as the State Department’s special envoy to Ukraine. Democratic lawmakers leaked portions of his testimony and text messages to paint a misleading narrative that he had confirmed an alleged quid pro quo of military aid for investigation of Ukrainian corruption. Instead, Volker told lawmakers under oath that he was never asked to do anything wrong by any member of the administration, including President Trump. He further described the relationship with Ukraine as extremely positive and as good as anyone could hope for given the tumult in the region.

From Chuck Ross at Da Caller, State Department Official Said He Raised Concerns Over Burisma Corruption In 2016, back in the Obama era, when Hunter was getting on the board.


A senior State Department official told Congress on Tuesday that he had concerns in 2016 with corruption involving Burisma Holdings, the Ukrainian energy firm linked to Hunter Biden, two sources familiar with his testimony told the Daily Caller News Foundation.

George Kent, who serves as deputy assistant secretary of state for Eurasian and European affairs, spoke at length Tuesday about Burisma’s problems with corruption, the two sources told the DCNF. They shared details of the deposition on condition of anonymity.


Did Gordon Sondland throw Donald Trump “under the bus” in his opening statement to House investigators this morning, or just point out the obvious? The ambassador didn’t spare Rudy Giuliani, at any rate, in expressing his “disappointment” over Trump’s decision to delegate Ukrainian diplomacy to his personal attorney. That’s not quite connecting any dots, however, and Sondland also soundly rejects the “quid pro quo” hypothesis being advanced by House Democrats . . .
. . .
We now have two of the “Three Amigos” on Ukraine insisting that they never got directed to support a quid pro quo. Assuming they’re testifying truthfully, they would have been passing that message along to their contacts in Ukraine as well, which means that they would have been eliminating the pressure to dig up dirt on the Bidens. They would have related Trump’s words about wanting “nothing” in exchange for the aid, and specifically, “There is no quid pro quo.”

Tyler O'Neil, PJ Media, Rick Perry to Resign After Trump Blamed Him for Ukraine Call. As Charles De Gaulle once said, the graveyards are full of indispensable men. Politico sagely notes Giuliani Ukraine associate had checkered past even before indictment. That's why people hire lawyers! 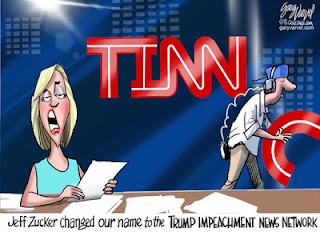 
His framing is damning because it shows he doesn’t reject what is at best crony capitalism—he just rejects the fact that it might be noticed and inferred to be corruption. Had this interview been exculpating, it would have resulted in Biden condemning both.

And to segue from Ukraine to impeachment politics, sundance at CTH gives us  Jim Jordan Reacts to Hunter Biden Interview and Ongoing Schiff Impeachment Maneuvers…

From the Wombat's In The Mailbox: 10.17.19, the Weasel Zippers bring us Democrats Cut Mic On House Floor To Avoid Rep. Scalise’s Impeachment Question, also, Video – Democrats, Journalists Use Same Talking Points On Trump Impeachment. and Just One Minute Trouble For Trump.

AllahPundit, John Yoo: The Framers Never Would Have Wanted To See Impeachment Happen Within A Year Of A Presidential Election. Allah not a fan. From Breitbart, Schiff Not Worried About Impeachment Probe Hurting Vulnerable Dems: ‘Let the Chips Fall Where They May’

CR, Levin: The ‘symbiotic relationship’ between Dems and the media is shutting ‘we the people’ out of the impeachment process


We are living through a phantasmagoric psychodrama generated by the dishonest national political press. This is the press whose Joe Scarborough of MSNBC did not show some of President Trump’s responses to his enemies because of “concern” for the president’s family, as he “seems to have lost his mind.”


If the Democrats actually want to impeach Trump — a doubtful presumption given Pelosi’s behavior — this is a disastrous strategy. The fog of conflicting impeachment excuses leaves voters feeling the way they did before Trump ever called Kyiv. Those who hate him still hate him, those who love him still love him.

If, instead, Pelosi just wants to get the #resist-types off her back and let Trump remain in the Oval Office through the 2020 election, the misty messaging will work just fine. The base feasts on red meat and her red-state congresspeople won’t get destroyed next November.

Peggy Ryan at AmThink, Republicans in Congress: Time To Walk Away


But wait — we have two parties. Where are the Republicans? Oh, they're over there, the crestfallen group sitting next to the criminals trying to take down our president. They're the minority members who've been sent to a corner, not allowed to speak, call witnesses, or issue subpoenas. They're powerless to affect these hearings in any way.

Yet Republicans dare to tell us they're doing all they can because they send letters to the rat pack leaders and publicly condemn the hearings (how courageous).

But what else can Republicans do? They have no legal options; their hands are tied. And they have all those House rules to contend with (can't color outside the lines you know, not allowed).

Well, here's my humble suggestion. If Republicans really aren't part of this impeachment effort, then walk away. Stand up and walk out of the hearings. Expose the show trial for what it is: a Democrat plot against the president, a leftist move to dismantle our Republic.

If GOP "moderates" want to stay, fine. Then we'll know who's willing to defend the Constitution and who's aligned with the enemy.

Or some might stay to preserve the reputation of the venerable, highly respected House of Representatives. Sorry, guys; that ship has sailed. Even the mainstream media's brainwashed audience no longer views Congress as a respected body.

As long as Republicans allow themselves to be sidelined in these hearings, they make it appear a bipartisan process, giving an air of legitimacy to this kangaroo court.


"I think the court’s going to do everything in its power to avoid getting into the subpoena stuff," says Neal Devins, a law professor at William & Mary Law School. "But it might not be able to easily avoid the issue."

The former national security was reportedly deeply uncomfortable with Rudy Giuliani’s Ukraine efforts. Now a source tells The Daily Beast that Democrats want to hear his testimony. Uncomfortable not equal to impeachable.

Linked at Pirate's Cove in the weekly Sorta Blogless Sunday Pinup and links.
Posted by Fritz at 8:50 AM